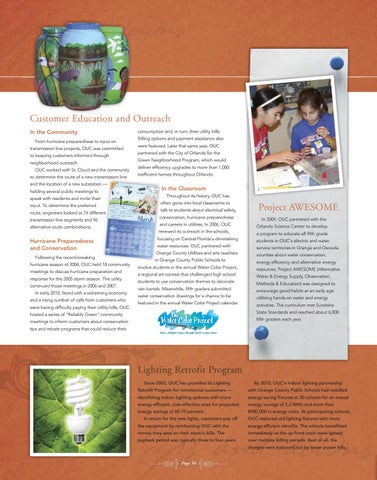 Customer Education and Outreach In the Community From hurricane preparedness to input on transmission line projects, OUC was committed to keeping customers informed through neighborhood outreach. OUC worked with St. Cloud and the community to determine the route of a new transmission line and the location of a new substation — holding several public meetings to speak with residents and invite their input. To determine the preferred route, engineers looked at 74 different transmission line segments and 96 alternative route combinations.

Hurricane Preparedness and Conservation Following the record-breaking hurricane season of 2004, OUC held 18 community meetings to discuss hurricane preparation and response for the 2005 storm season. The utility continued those meetings in 2006 and 2007. In early 2010, faced with a worsening economy and a rising number of calls from customers who were having difficulty paying their utility bills, OUC

consumption and, in turn, their utility bills.

Beginning in 2006, the demand for affordable,

than ever, as the whole country was embracing a

partnered with the City of Orlando for the

Green Neighborhood Program, which would

renewable resources to their generation portfolios

deliver efficiency upgrades to more than 1,000

as Congress debated “climate” laws that would

tax carbon emitted from power plants. Talk of “cap and trade” regulation was the rage as utilities

began to look for ways to reduce their power plant

Throughout its history, OUC has often gone into local classrooms to talk to students about electrical safety, conservation, hurricane preparedness

Project AWESOME In 2009, OUC partnered with the

OUC undertook an electric Integrated Resource Plan to determine the best way to provide clean, affordable, reliable power and to comply with

renewed its outreach in the schools,

a program to educate all fifth grade

students in OUC’s electric and water

service territories in Orange and Osceola

in Orange County Public Schools to

A Commitment to Sustainability In response, OUC renewed its efforts to

so that they are as reliable as the crews and

That commitment to sustainability was equally evident in OUC’s growing fleet. OUC’s reputation for reliable and responsive electric and water service over the years stems, in large part, from the hard work of the Fleet Division that has kept the utility’s vehicles on the road and ready to roll. In 1955, the then-Automotive Department was responsible for maintaining 57 vehicles ranging from gas-powered trucks to tractors. Since that time, the fleet has grown to include more than 800 vehicles, many of which run on lower emission biodiesel and several of which are high-efficiency plug-in electric cars and hybrid bucket trucks. Service and repair

records once kept in handwritten logs are now

that promoted sustainability throughout the

students to use conservation themes to decorate

tracked via high-tech software that communicates

Methods &amp; Education) was designed to

with a vehicle’s onboard computer to run

recycling program and upgrading facilities with

water conservation drawings for a chance to be

fuel consumption and performance. These

advancements have helped OUC improve the

State Standards and reached about 6,000

thermostats; and forming a Green Team of

efficiency and safety of the fleet, lowering

employee volunteers who worked to implement

emissions and maximizing the life of the vehicles,

personnel they carry. In 2006, OUC began using biodiesel fuel in its diesel fleet trucks. Made from renewable domestic resources — like fats used in cooking grease — biodiesel is a cleaner burning, lower emission alternative to pure petroleum diesel fuels. The B20 mix integrated seamlessly into OUC’s current fueling system while reducing carbon dioxide emissions by more than 15 percent. The Fleet Division also incorporated a number of other eco-conscious policies, using earth-friendly products and disposing of contaminated fuels according to environmental standards. Tires, batteries and oil filters were recycled through vendors, while freon, antifreeze and motor oil were handled on site. Water was recycled, too — thanks to mini-water treatment plants and wash racks at the Pershing and Gardenia facilities that kept OUC vehicles clean. OUC uses computers to run vehicle diagnostics.

practical, sustainable operations in their areas.

tips and rebate programs that could reduce their

energy-saving fixtures at 30 schools for an annual

energy-efficient, cost-effective ones for projected

energy savings of 2.2 MWs and more than

In return for the new lights, customers pay off

OUC was the first

municipal utility in Florida to acquire a

the equipment by reimbursing OUC with the

money they save on their electric bills. The

immediately as the up-front costs were spread

over multiple billing periods. Best of all, the

plug-in hybrid that gets up to 99 mpg.

charges were balanced out by lower power bills.