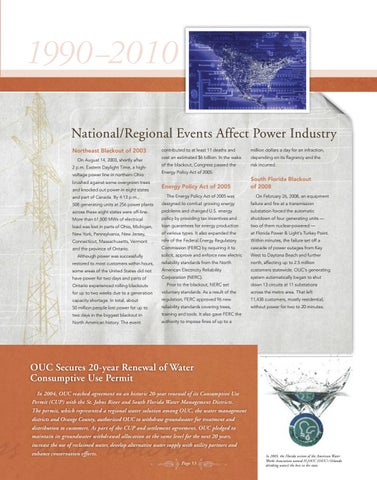 A Decade of Reliability “The Reliable One” was benchmarked as the most reliable utility in the Southeast region in 2002, 2003, 2006 and 2007 and in the state

In addition, OUC’s generation units are among the most reliable in the nation.

OUC as the winner of the Southeast region

ReliabilityOne™ award, which is given annually

that measures unplanned outages, not

to the utilities that have excelled in delivering

scheduled ones. In 2010, the national average

reliable electric service to their customers.

for unplanned outages was about 8 percent; however, Stanton Energy Center’s coal-fired

National/Regional Events Affect Power Industry Northeast Blackout of 2003 On August 14, 2003, shortly after 2 p.m. Eastern Daylight Time, a highvoltage power line in northern Ohio brushed against some overgrown trees and knocked out power in eight states and part of Canada. By 4:13 p.m.,

contributed to at least 11 deaths and

million dollars a day for an infraction,

cost an estimated $6 billion. In the wake

depending on its flagrancy and the

of the blackout, Congress passed the

failure and fire at a transmission

across these eight states were off-line.

including the use of 3-D (three-dimensional)

load was lost in parts of Ohio, Michigan,

two of them nuclear-powered —

of various types. It also expanded the

role of the Federal Energy Regulatory

Within minutes, the failure set off a

and the province of Ontario.

Commission (FERC) by requiring it to

cascade of power outages from Key

West to Daytona Beach and further

Units 1 and 2 averaged a remarkably low

performance well ahead of Florida’s four

Although power was successfully

restored to most customers within hours,

reliability standards from the North

north, affecting up to 2.5 million

some areas of the United States did not

have power for two days and parts of

en Ksionek was named interim General Manager after the death of Bob Haven and given the permanent position October 12, 2004. Ksionek had served as Vice President of OUC’s Energy Delivery Business Unit from 1995 to 2004 — managing the engineering, construction, maintenance and operation of OUC’s

the average number of outage minutes per year.

Comparison of the Florida Public Service

electric distribution systems. Ksionek, a graduate of the University of Wisconsin, joined OUC in 1985 as Director of Construction for the Stanton Energy Center Unit 1 and then became the Director of Capital Projects and Co-Project Manager of Stanton Unit 2 Construction. During his tenure as Vice President of Energy Delivery, OUC gained national prominence for its reliability. Ksionek took over the General Manager and CEO position in what would become one of the most tumultuous years in OUC history. Having no time to prepare for the transition, he had to immediately deal with employees mourning the loss of a beloved leader and final negotiations on a 20-year water consumptive use permit. Testing the mettle of the new leader even further, Hurricane Charley pummeled Central Florida on Friday, August 13 — leaving 80 percent of OUC’s customers without power. OUC had never experienced a storm of this magnitude — and for the first

time had to ask other utilities for assistance. Charley was followed weeks later by Hurricanes Frances and Jeanne. Through it all, Ksionek proved to be the right leader for the right time. His intimate knowledge of the electric system and the emergency preparedness plan allowed him to respond quickly. Four years later, Ksionek would be tested yet again as he had to lead OUC through what has been labeled a national economic recession. The financial tsunami that followed required a steady hand as the utility faced volatile fuel markets and a local housing downturn that put a halt to customer growth. Through it all, Ksionek persevered and OUC fared well by effectively reducing expenses and improving operational efficiencies. At the same time, the electric and water utility industries were once again facing potential increased regulation. The Florida Public Service Commission approved compliance goals that would require the state’s larger

electric utilities to reduce energy consumption and increase customer education. As typical of Ksionek, he not only wanted to meet the goals, but exceed them. As a result, OUC is well on its way to not only helping customers conserve, but also finding ways to weave sustainability through all parts of the organization. From building a Gold LEED (Leadership in Energy and Environmental Design) customer service and administration center to constructing a solar farm at the Stanton Energy Center, OUC is committed to providing clean water and electricity that is affordable and reliable. Over the years, Ksionek’s steadiness and strength helped OUC weather whatever challenges have come its way. But, above all, his passion for reliability sets him apart. From the power plants to the meter, he knows every inch of the system and remains focused on providing the highest level of service to OUC’s customers.

Prior to the blackout, NERC set

down 13 circuits at 11 substations

for up to two weeks due to a generation

voluntary standards. As a result of the

across the metro area. That left

capacity shortage. In total, about

50 million people lost power for up to

without power for two to 20 minutes.

two days in the biggest blackout in

training and tools. It also gave FERC the

authority to impose fines of up to a

OUC Secures 20-year Renewal of Water Consumptive Use Permit In 2004, OUC reached agreement on an historic 20-year renewal of its Consumptive Use Permit (CUP) with the St. Johns River and South Florida Water Management Districts. The permit, which represented a regional water solution among OUC, the water management districts and Orange County, authorized OUC to withdraw groundwater for treatment and distribution to customers. As part of the CUP and settlement agreement, OUC pledged to maintain its groundwater withdrawal allocation at the same level for the next 20 years, increase the use of reclaimed water, develop alternative water supply with utility partners and enhance conservation efforts. Page 53

In 2003, the Florida section of the American Water Works Association named H2OUC (OUC’s Orlando drinking water) the best in the state.