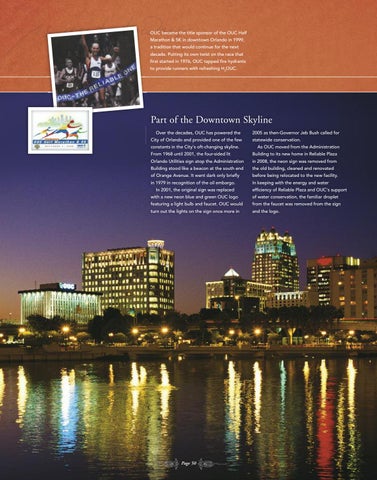 OUC became the title sponsor of the OUC Half Marathon &amp; 5K in downtown Orlando in 1999, a tradition that would continue for the next decade. Putting its own twist on the race that first started in 1976, OUC tapped fire hydrants to provide runners with refreshing H2OUC.

Part of the Downtown Skyline Over the decades, OUC has powered the City of Orlando and provided one of the few constants in the City’s oft-changing skyline.

2005 as then-Governor Jeb Bush called for

With lasers and fireworks from Sydney,

As OUC moved from the Administration

the globe greeted the new millennium with a

Building to its new home in Reliable Plaza

flash — but without so much as a flicker of

their electric power grids. The rollover in the

Building stood like a beacon at the south end

the old building, cleaned and renovated

U.S. and Canada was monitored closely by the

of Orange Avenue. It went dark only briefly

before being relocated to the new facility.

in 1979 in recognition of the oil embargo.

In keeping with the energy and water

which reported that no Y2K events affected

In 2001, the original sign was replaced with a new neon blue and green OUC logo

of water conservation, the familiar droplet

featuring a light bulb and faucet. OUC would

deployed to strategic locations stood by as

turn out the lights on the sign once more in

the year 2000 began. All eyes were on critical

At OUC, nearly 300 employees who were

power, water and information management systems, but none had problems adjusting to the date change. OUC’s success was attributed to thousands of hours of work over the prior 2.5 years, including the implementation of a Y2K initiative.

In 2001, OUC launched a print advertising campaign to help recruit a diverse workforce.

Fuel Diversity: Stanton A and B Natural Gas Generating Units Come Online steam generators and a steam turbine, which

however, the gasification component was

cancelled in 2007 due to environmental

was a joint development project among

Company proceeded with the construction

of a 300-MW combined-cycle natural gas

was built north of the two existing coal units

and is owned and operated by OUC.

on 60 acres of the 3,280-acre Stanton Energy Center site. OUC and partner Southern Company An important aspect of OUC’s generation

asset restructuring plan was to invest in

for Clean Coal project in 2004. The grant

was awarded to help build a $557 million,

diversity. The Stanton A and B units provide

a combined 933 MWs of clean generation.

at SEC as part of the department’s Clean

Stanton A is a 633-MW, natural gas-fired

Coal Power Initiative. The project was

expected to break ground in 2007 and