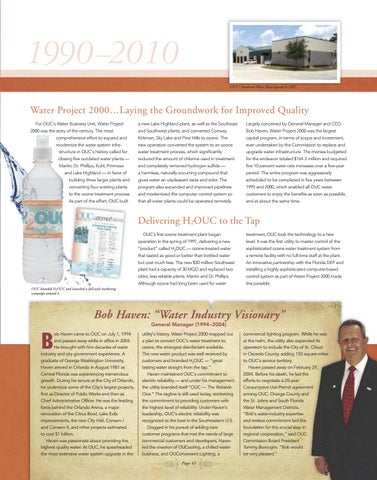 About 5,000 visitors came to SEC for the Unit 2 dedication. The three-day celebration included a public open house that drew 3,500; a train ride for nearly 100 civic and political leaders; a “power breakfast” for 300 civic, industry, and electric utility leaders; and a picnic for more than 1,000 employees and family members.

began commercial operation on June 1, 1996, on time and $62 million under the original budget of $522 million. At 425 MW, it was the first pulverized coal unit of its size in the nation to use Selective Catalytic Reduction to remove nitrogen oxide from the flue gas — meeting and exceeding all federal regulations for air quality.

A Safe Work Environment Employing about 5,600 people on site during 39 months of construction, Stanton 2 was one of the safest such construction projects in the nation, earning the STAR award from the Federal Occupational Safety and Health Administration. OUC&#39;s aggressive safety program saved about $10 million in insurance premiums.

A Commitment to Maximizing Participation and Diversity From the onset, the Stanton 2 Project Team was committed to maximizing Central Florida participation and ensuring a diverse workforce. The team established a proactive multi-faceted M/ WBE outreach program with a full-time coordinator hired to run the program. The project achieved its objectives with approximately

70 percent of the craft workforce coming from the

Kirkman, Sky Lake and Pine Hills to ozone. The

new operation converted the system to an ozone

ever undertaken by the Commission to replace and

reduced the amount of chlorine used in treatment

for the endeavor totaled $164.3 million and required

a harmless, naturally occurring compound that

period. The entire program was aggressively

gives water an unpleasant taste and odor. The

scheduled to be completed in five years between

to the ozone treatment process.

and modernized the computer control system so

customers to enjoy the benefits as soon as possible,

As part of the effort, OUC built

that all water plants could be operated remotely.

and at about the same time.

Central Florida region, and 30 percent minorities and women. In addition, 37 percent of the more

Delivering H2OUC to the Tap

than $60 million in subcontracts, supplies and permanent plant material was awarded to

treatment, OUC took the technology to a new

operation in the spring of 1997, delivering a new

level. It was the first utility to master control of the

without goals but rather by proactive contractor

that tasted as good or better than bottled water

a remote facility with no full-time staff at the plant.

forums during the bidding stages.

but cost much less. The new $30 million Southwest

An innovative partnership with the Florida DEP and

plant had a capacity of 30 MGD and replaced two

control system as part of Water Project 2000 made

Although ozone had long been used for water

The M/ WBE participation was accomplished

OUC branded H2OUC and launched a full-scale marketing campaign around it.

projects, including the renovation of an American Red Cross Disaster Relief trailer and

construction of a park for the Metropolitan Orlando Urban League.

General Manager (1994–2004) ob Haven came to OUC on July 1, 1994 and passed away while in office in 2004. He brought with him decades of water industry and city government experience. A graduate of George Washington University, Haven arrived in Orlando in August 1981 as Central Florida was experiencing tremendous growth. During his tenure at the City of Orlando, he undertook some of the City’s largest projects, first as Director of Public Works and then as Chief Administrative Officer. He was the leading force behind the Orlando Arena, a major renovation of the Citrus Bowl, Lake Eola improvements, the new City Hall, Conserv I and Conserv II, and other projects estimated to cost $1 billion. Haven was passionate about providing the highest quality water. At OUC, he spearheaded the most extensive water system upgrade in the

Launching OUC — The Reliable One In celebration of its 75th anniversary, Orlando Utilities Commission officially made service reliability part of its name . . . becoming OUC — The Reliable One in 1998. During the branding process, the utility conducted extensive research to determine what was most important to its customers. When asked in focus groups what came to mind when they thought of OUC, the responses were consistent: OUC was the reliable utility. Many still remembered the Christmas freeze of 1989, when their electricity remained on, while other Central Florida electric utilities instituted rolling brownouts due to power supply shortages. More than 12 years later, the OUC brand remains strong — as does the promise to provide the highest level of reliability to customers. Page 44

and Southwest plants, and converted Conway,

comprehensive effort to expand and

and Lake Highland — in favor of

modernize the water system infrastructure in OUC’s history called for

a new Lake Highland plant, as well as the Southeast

utility’s history. Water Project 2000 mapped out a plan to convert OUC’s water treatment to ozone, the strongest disinfectant available. The new water product was well received by customers and branded H2OUC — “great tasting water straight from the tap.” Haven maintained OUC’s commitment to electric reliability — and under his management, the utility branded itself “OUC — The Reliable One.” The tagline is still used today, reinforcing the commitment to providing customers with the highest level of reliability. Under Haven’s leadership, OUC’s electric reliability was recognized as the best in the Southeastern U.S. Dogged in his pursuit of adding new customer programs that met the needs of large commercial customers and developers, Haven led the creation of OUCooling, a chilled water business, and OUConvenient Lighting, a

commercial lighting program. While he was at the helm, the utility also expanded its operation to include the City of St. Cloud in Osceola County, adding 150 square miles to OUC’s service territory. Haven passed away on February 29, 2004. Before his death, he led the efforts to negotiate a 20-year Consumptive Use Permit agreement among OUC, Orange County and the St. Johns and South Florida Water Management Districts. “Bob’s water-industry expertise and tireless commitment laid the foundation for this crucial step in regional cooperation,” said OUC Commission Board President Tommy Boroughs. “Bob would be very pleased.”