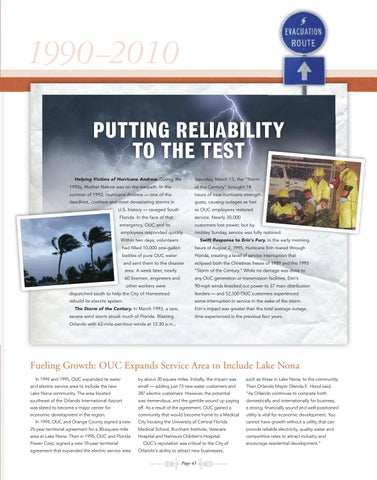 OUC’s bulk sales and interchange activities escalated dramatically in the ‘80s and so did the role of its sophisticated load dispatch/energy control center, located at the Pershing Operations Center.

and water systems, all 24-hour operations

Both facilities were built to replace the small,

maintenance facilities located on the north

side of Lake Highland. Costing a combined

was completed in the fall of 1993 and

$37 million, they were constructed to meet

OUC’s space needs for up to 20 years.

PUTTING RELIABILITY TO THE TEST

Helping Victims of Hurricane Andrew. During the

1990s, Mother Nature was on the warpath. In the

of the Century” brought 18

deadliest, costliest and most devastating storms in

Florida. In the face of that

emergency, OUC and its

customers lost power, but by

Swift Response to Erin’s Fury. In the early morning

Florida, creating a level of service interruption that

and sent them to the disaster

in place since 1989, IRP represented 57 percent

“Storm of the Century.” While no damage was done to

of OUC’s total generating capacity. All IRP units operated on either oil or natural gas, a flexibility that enabled the utility to take advantage of market conditions and buy fuel cheaper than other utilities. IRP was also valuable to OUC as a source of substantial revenue from bulk power sales.

dispatched south to help the City of Homestead

some interruption in service in the wake of the storm.

The Storm of the Century. In March 1993, a rare, severe wind storm struck much of Florida. Blasting

Erin’s impact was greater than the total average outage time experienced in the previous four years.

Fueling Growth: OUC Expands Service Area to Include Lake Nona In 1994 and 1995, OUC expanded its water

by about 20 square miles. Initially, the impact was

such as those in Lake Nona, to the community.

tested its first electric-powered vehicles in

and electric service area to include the new

287 electric customers. However, the potential

“As Orlando continues to compete both

southeast of the Orlando International Airport

was tremendous, and the gamble wound up paying

domestically and internationally for business,

was slated to become a major center for

off. As a result of the agreement, OUC gained a

a strong, financially sound and well-positioned

“on the road” in a minivan outfitted with

economic development in the region.

community that would become home to a Medical

utility is vital for economic development. You

cannot have growth without a utility that can

25-year territorial agreement for a 30-square-mile

competitive rates to attract industry and

OUC’s reputation was critical to the City of Orlando’s ability to attract new businesses,