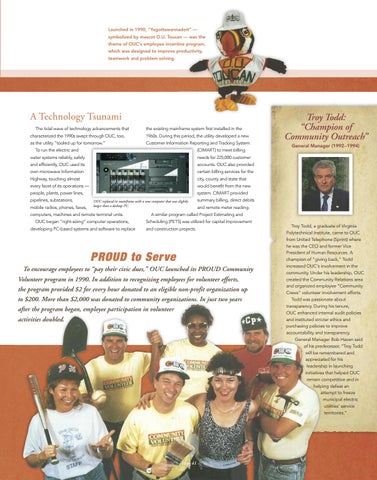 Launched in 1990, “Yagottawannadoit” — symbolized by mascot O.U. Toucan — was the theme of OUC’s employee incentive program, which was designed to improve productivity, teamwork and problem solving.

Keeping It Clean In 1990, the last major changes to the Clean Air

The tidal wave of technology advancements that

the existing mainframe system first installed in the

characterized the 1990s swept through OUC, too,

1960s. During this period, the utility developed a new

as the utility “tooled up for tomorrow.”

monoxide and particulate matter. The amendments

Its power plants were already operating at levels

To run the electric and

encouraged, for the first time, the use of market-

significantly lower than the limits in the Clean Air

based principles and other innovative approaches

and efficiently, OUC used its

certain billing services for the

city, county and state that

every facet of its operations —

would benefit from the new

carbon/chlorine process instead of aeration to

enhance taste and eliminate odor. The process was

provide water to the southern part of the service

territory. Rated at 24 MGD, Sky Lake was the

second OUC plant to use the utility’s patented

OUC replaced its mainframe with a new computer that was slightly larger than a desktop PC.

PROUD to Serve To encourage employees to “pay their civic dues,” OUC launched its PROUD Community Volunteer program in 1990. In addition to recognizing employees for volunteer efforts, the program provided $2 for every hour donated to an eligible non-profit organization up to $200. More than $2,000 was donated to community organizations. In just two years after the program began, employee participation in volunteer activities doubled.

In 1991, OUC completed the most extensive five-year program in its history to improve and expand its transmission and distribution (T&amp;D) system — adding nearly $200 million in new or upgraded T&amp;D facilities and equipment. In that time, the utility increased its primary circuit miles 27 percent to 1,246 miles and grew its capacity 23 percent to 1.8 million kV. But those statistics tell only half the story. They do not reflect the magnitude of the ongoing process of upgrading or replacing older infrastructure, modernizing or relocating equipment because of street and highway projects, and streetscaping projects that required undergrounding power lines, as well as enhancing and improving overhead systems. In 1991 alone, OUC upgraded underground systems in 10 older subdivisions to improve reliability. Ten new distribution feeder circuits were installed, the highest number in one year in OUC history. The system would eventually be expanded to include 29 substations, 338 circuit miles of transmission and 1,884 circuit miles of distribution, more than 60 percent of which is underground.

Troy Todd, a graduate of Virginia Polytechnical Institute, came to OUC from United Telephone (Sprint) where he was the CEO and former Vice President of Human Resources. A champion of “giving back,” Todd increased OUC’s involvement in the community. Under his leadership, OUC created the Community Relations area and organized employee “Community Crews” volunteer involvement efforts. Todd was passionate about transparency. During his tenure, OUC enhanced internal audit policies and instituted stricter ethics and purchasing policies to improve accountability and transparency. General Manager Bob Haven said of his predecessor, “Troy Todd will be remembered and appreciated for his leadership in launching initiatives that helped OUC remain competitive and in helping defeat an attempt to freeze municipal electric utilities’ service territories.”