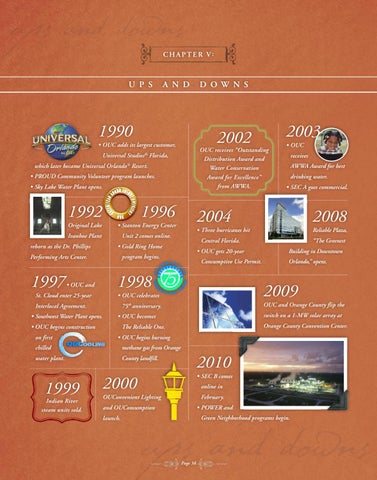 reborn as the Dr. Phillips

and the turbulence made forecasting and planning a challenge, to say the

add more than 1,000 MW of generation. To meet the needs of OUC’s

least. High points — including the opening of Universal Studios® Florida, and

expanding customer base, two operations facilities — the Pershing and

a boom in residential and commercial construction — were followed by

Gardenia Centers — were opened along with Reliable Plaza, a new customer

nation, the bursting of the real-estate bubble and severe

needs with Water Project 2000, which was designed to

economic recession. But, through it all, one thing was

drinking water with ozone. By the turn of the century,

hand allowed the utility to live up to its name.

OUC had taken proactive steps to prepare for

Although economic conditions at home and the Persian

Gulf crisis abroad clouded the dawn of the 1990s, long-term

projections for Metro Orlando remained bright with the promise of continued

OUCooling and OUConvenient Lighting. In 1998, the utility celebrated its 75th anniversary — formalizing a

growth. The region was often in the national spotlight, cited by numerous

publications for having an excellent climate for business. As the decade

progressed and the economy rebounded, advances in telecommunications

The Reliable One. That mantra has become a compass that not only guides

and computer networking marked the advent of the “dot.com” era —

and deregulation of the utility industry loomed.

on and the water flowing . . . even in the face of Mother Nature’s most severe threats.

to support a booming population and diversify its portfolio, the utility would

switch on a 1-MW solar array at

OUC and Orange County flip the

which later became Universal Orlando® Resort. Over the next two decades,

and downs and twists and turns that rivaled the roller coasters