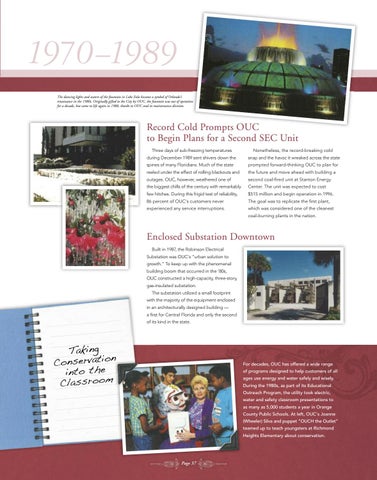 community it served. This effort to attract, retain and

helped OUC further strengthen its role as a

the Preferred Provider Organization program. In

diversification effort to include Minority/Women-

a self-insurance program to cover Workers’

training and safety programs for employees —

Liability to hold down these insurance costs.

in the classroom and in the field — to ensure that

At the same time, OUC embarked on a mission

to diversify its workforce to better reflect the

The dancing lights and waters of the fountain in Lake Eola became a symbol of Orlando’s renaissance in the 1980s. Originally gifted to the City by OUC, the fountain was out of operation for a decade, but came to life again in 1988, thanks to OUC and its maintenance division.

they had the proper skills and training to perform their jobs safely and effectively.

The Power of Municipalities Pooling Their Resources Already a pacesetter in joint action, OUC set

during December 1989 sent shivers down the

snap and the havoc it wreaked across the state

spines of many Floridians. Much of the state

prompted forward-thinking OUC to plan for

reeled under the effect of rolling blackouts and

the future and move ahead with building a

outages. OUC, however, weathered one of

the biggest chills of the century with remarkably

Center. The unit was expected to cost

few hitches. During this frigid test of reliability,

The goal was to replicate the first plant,

which was considered one of the cleanest coal-burning plants in the nation.

another new precedent in 1986 when it began

OUC continues to operate what is now called the

Marketing (FEM) and is responsible for the

Substation was OUC’s “urban solution to

Springs and Bushnell. This made OUC the first in

dispatching of the pool&#39;s generating resources

growth.” To keep up with the phenomenal

the state, and possibly the nation, to provide total

in the most economical manner. Over the course

building boom that occurred in the ‘80s,

dispatching services to other electric utilities that

of its 22-year existence, the pool has saved

were completely non-contiguous, both electrically

a first for Central Florida and only the second of its kind in the state.

Assistant General Manager (1986–1989) Rollins College graduate with a degree in Chemistry, Lou Stone joined Orlando Utilities Commission in 1949 and retired in 1989. During his 40 years at OUC, he rose from a water laboratory chemist to the role of assistant general manager. Dubbed OUC’s “dean of electric generation,” Stone served as head of electric operations from 1967 to 1986 and is known as an expert in power plant operations and electric reliability measurement. Stone’s passion for reliability started early in his career, at a time when OUC’s only source of power was the old 18-MW

Lake Ivanhoe Plant. Hired as part of the group that would bring the new Lake Highland Plant online, Stone developed a system to train operators to effectively start up a “dark plant.” He went on to become the first Superintendent of the Indian River Plant. When it came time to design the Stanton Energy Center (SEC), Stone was named head of electric operations — and he committed to making SEC the cleanest, most reliable coal-fired power plant in the country.

“The legacy of which I am probably the proudest is the one in which I was the architect and creator of the use of reliability in customer service,” Stone said. When Stone took over OUC’s electric operations, he realized that there was no standardized method of measuring customer reliability. Every power system calculated it differently — from counting the number of service calls . . . to feeder outages . . . to storm-caused outages. All of these determined only how a utility compared to its own previous

performance — not how it stacked up against other utilities. “I began an extensive study for creating a methodology that could be utilized by any utility,” Stone said. “Ultimately, I formulated such a mathematical model. Through OUC’s participation in the FCG (Florida Electric Power Coordinating Group), our representatives were able to start reporting reliability using the methodology I developed. It was adopted by the Florida Public Service Commission with only minor alterations.”

Taking n Conservatio into the Classroom

For decades, OUC has offered a wide range of programs designed to help customers of all ages use energy and water safely and wisely. During the 1980s, as part of its Educational Outreach Program, the utility took electric, water and safety classroom presentations to as many as 5,000 students a year in Orange County Public Schools. At left, OUC’s Joanne (Wheeler) Silva and puppet “OUCH the Outlet” teamed up to teach youngsters at Richmond Heights Elementary about conservation.