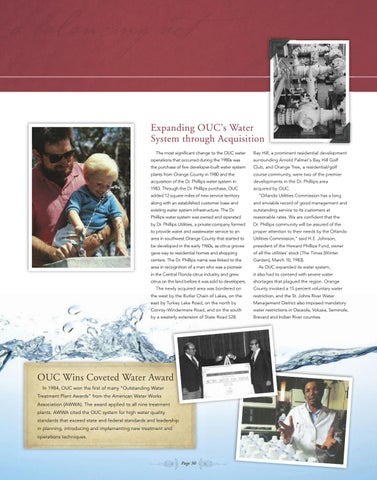 As a result of the new structure, high energy

operations that occurred during the 1980s was

of the previous decade, conservation played

Club, and Orange Tree, a residential/golf

a prominent role in the 1980s. To help reduce

plants from Orange County in 1980 and the

course community, were two of the premier

program — and it was a resounding success.

acquisition of the Dr. Phillips water system in

developments in the Dr. Phillips area

On the first day, more than 300 customers

1983. Through the Dr. Phillips purchase, OUC

swamped OUC with requests for audits

users were charged a higher rate. In 1984, OUC began its Home Energy Audit

“Orlando Utilities Commission has a long

along with an established customer base and

and enviable record of good management and

which served as the foundation of OUC’s

outstanding service to its customers at

energy and water conservation efforts. Most

$5 to customers who had audits. OUC also

reasonable rates. We are confident that the

have been expanded over the years and are

gave participants a one-time $10 credit for

Dr. Phillips community will be assured of the

buying energy-efficient appliances and a free

to provide water and wastewater service to an

proper attention to their needs by the Orlando

During this period, OUC revamped its

water-heater jacket, which saved them about

area in southwest Orange County that started to

rate structure for energy use to encourage

be developed in the early 1960s, as citrus groves

conservation as part of a state-mandated plan.

of all the utilities’ stock (The Times [Winter

Prior to this time, high energy users received

centers. The Dr. Phillips name was linked to the

a discounted rate because it cost OUC less

who could not afford to make the minor repairs

to generate large amounts of electricity.

and improvements needed to save energy.

area in recognition of a man who was a pioneer

As OUC expanded its water system,

in the Central Florida citrus industry and grew

it also had to contend with severe water

citrus on the land before it was sold to developers.

shortages that plagued the region. Orange

The newly acquired area was bordered on

east by Turkey Lake Road, on the north by

Conroy-Windermere Road, and on the south

by a westerly extension of State Road 528.

Harry Luff: “Architect of OUC Financial Systems” General Manager (1983–1986) arry Luff had a distinguished 40-year career at Orlando Utilities Commission. With an engineering degree from Brown University, Luff began his tenure at OUC in 1946 at the bottom — chipping slag off the boilers. He worked numerous positions in the plant where his familiarity with the operation of complex steam power plants and his ability to effectively analyze problems caused management to take notice. His attention to detail and ability to develop systems, processes and programs to solve problems catapulted him through the ranks — first as head of the electric operations department, then as Assistant

In 1984, OUC won the first of many “Outstanding Water Treatment Plant Awards” from the American Water Works Association (AWWA). The award applied to all nine treatment plants. AWWA cited the OUC system for high water quality standards that exceed state and federal standards and leadership in planning, introducing and implementing new treatment and operations techniques.

the west by the Butler Chain of Lakes, on the

$2 a month off their electric bill.

General Manager in 1967 and finally as General Manager in 1983. However, it was Luff’s financial acumen that enabled OUC to fund rapid expansion and investment in new technology. Curt Stanton remembers meeting Luff: “First time I ever saw him, he was crawling out of the boiler with an old sailor hat on, and I tell you he looked like . . . he was just covered with coal.“ Stanton soon learned that Luff’s willingness to roll up his sleeves and get into the nitty-gritty details would become a tremendous asset to OUC.

“In July 1967, Curt Stanton asked me to be his assistant general manager,” Luff recalled. “I wasn’t sure what my duties would be, but Curt assured me he had a lot of special assignments in mind. As it turned out, there were more assignments than I could handle alone. I assembled a strong team that developed the first cashflow diagrams ever used at OUC and a new depreciation system. We established formulas for fair payments to the City and County, as well as an electric and water ratemaking system. As an outgrowth of

these activities, we established a basis for using corporate financial modeling for long-range financial planning to study the impact of major system expansion on rates. Curt assigned us to work with bond issues and underwriters handling the finances for major plant additions. We found out the real issues that impact rates. It was a shock for a past plant engineer who thought that plant efficiency was everything in holding down rates to find out how many millions of dollars could be saved through sharp management of financing. In a highly capital-intensive business like electric utilities, the amount that can be saved is awesome.”