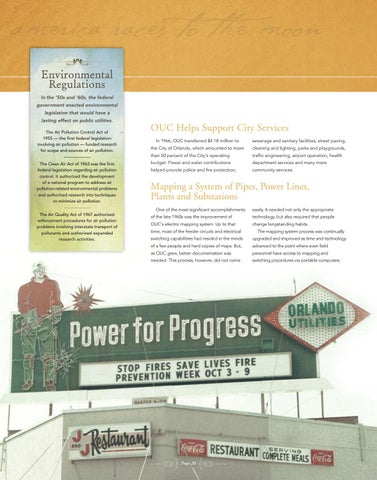 the City of Orlando, which amounted to more

cleaning and lighting, parks and playgrounds,

than 50 percent of the City’s operating

department services and many more

In 1968, the Florida State Board of Health

Mapping a System of Pipes, Power Lines, Plants and Substations One of the most significant accomplishments

OUC Water Department Chosen Best in State populations of more than 25,000, the state

board of field sanitary engineers judged the

large-city operation in the state for the previous

three years. After inspecting private and

easily. It needed not only the appropriate

of the late 1960s was the improvement of

technology, but also required that people

Building will give the Commission a greater

OUC’s electric mapping system. Up to that

and Customer Service Center at the corner of

time, most of the feeder circuits and electrical

The mapping system process was continually

Orange Avenue and Anderson Street. The

with the advent of Disney World, Florida

switching capabilities had resided in the minds

upgraded and improved as time and technology

new facility, which would serve as OUC’s

Technological University and the new Naval

of a few people and hard copies of maps. But,

advanced to the point where even field

home in downtown Orlando for the next 40

Training Center. These additions to our

as OUC grew, better documentation was

years, housed all of the Commission’s

economy will put increasing demands upon

needed. This process, however, did not come

administrative personnel, as well as business

and water services to a wide variety of new

Information Technology: From Spiral Notebooks to Mainframes Logging information into spiral notebooks was standard procedure when OUC first began operations in 1923. In 1966, that all changed, as the utility installed the first stage of its new $600,000 data processing system. The basic units of the new system, the IBM-360, were installed on the seventh floor of City Hall until the Commission’s new building was complete. B.L. Cording, OUC data processing division director, told the Orlando Morning Sentinel that “the IBM-360 is a vast, powerful system that will simplify OUC’s programming effort and will allow maximum utilization of equipment and provide continuous availability of necessary information.” (Orlando Sentinel, 1966)