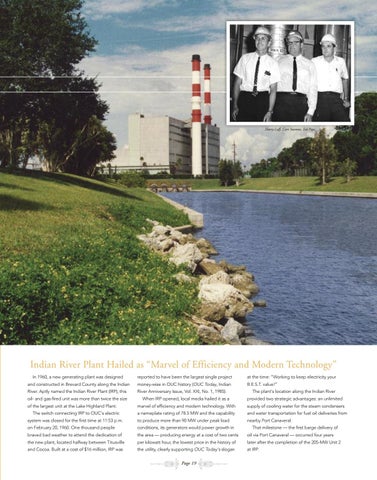 he 1960s saw advancements in transmitting and pooling electricity. Load dispatchers used the economic loading slide rule, which was the first analog computer at OUC. This helped them determine which units were the most “economical” to run during certain periods of time, based on factors like fuel cost and transmission availability.

for peaking service. At the time of their

installation, these units were the largest

peaking gas turbines in the world.

backup generation to cover the loss of units. For that reason,

OUC was expanding so quickly that its

paper on operation and maintenance of

interconnections provided OUC the ability to connect with

these turbines, which was presented to the

other utilities and back each other up.

gas turbines, in addition to the existing steam

units, at the Lake Highland Plant to be used

Utilities stood on their own and had to have enough

Interconnections were established with Florida Power

Corporation in Orlando and later with Florida Power &amp; Light (FPL) on the East Coast near the new plant site on the Indian River. At 2:46 p.m. on October 15, 1963, a 230,000-volt tie between OUC and FPL was energized at the Commission’s Indian River Plant by Curt Stanton, Executive Vice President and GM of OUC, and Alan Wright, Vice President of FPL. “The energizing of this tie represents the completion of another phase of the Orlando Utilities’ overall expansion

transmission lines that would loop around

Orlando. All recommendations were approved

planning study of its electric system with outside

engineering firm Black and Veatch to evaluate the system and establish a plan for facilitating growth.

In 1961, the high-voltage transmission loop around the Orlando area was completed —

program to strengthen and increase the capability of its

To increase system reliability, Black and

interconnections with other power systems. And

further source of supply of energy in the event of power

interconnections with other power systems,

failure and increases the total tie capacity to 350,000 kW.”

select a site for a new power plant and install

placing OUC in a strong position to add more

the need for new substations and 115 kV

In 1960, a new generating plant was designed

reported to have been the largest single project

at the time: “Working to keep electricity your

and constructed in Brevard County along the Indian

oil- and gas-fired unit was more than twice the size

When IRP opened, local media hailed it as a

marvel of efficiency and modern technology. With

supply of cooling water for the steam condensers

a nameplate rating of 78.5 MW and the capability

and water transportation for fuel oil deliveries from

to produce more than 90 MW under peak load

conditions, its generators would power growth in

braved bad weather to attend the dedication of

the area — producing energy at a cost of two cents

per kilowatt hour, the lowest price in the history of

later after the completion of the 205-MW Unit 2

and Cocoa. Built at a cost of $16 million, IRP was

of the largest unit at the Lake Highland Plant. The switch connecting IRP to OUC’s electric

As part of a national campaign launched by the electric industry, OUC participated in the Gold Medallion Home program, which touted the built-in advantages of “living better electrically.” Dwellings that were awarded this seal used “low-cost electricity” exclusively for “winter heat, summer cooling, year-around cooking and water-heating, as well as for light and power.”

The plant’s location along the Indian River

That milestone — the first barge delivery of