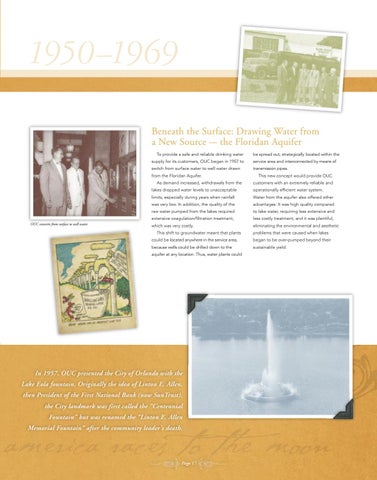 In 1956, when the Glenn L. Martin Company decided to locate a large missile facility in southwest Orlando, OUC worked to provide the infrastructure needed to support the addition of this new company to our community.

“We found out where the Glenn Martin Company was going to locate about a week before it was publically announced. In those days, whoever had lines closest served the customer. So we got around there close enough. We also had the advantage of providing water in addition to electricity, which was a big plus for Martin. We agreed to build them a separate water plant, because they were too far away from our water lines. And we actually dug wells and put in a small water treatment plant.” – Curt Stanton OUC General Manager at the time The Martin facility, which would eventually employ thousands of people to manufacture missiles and other hardware for the U.S. military, became a major player in the growth that occurred in southwest Orange County during the 1950s and 1960s. The defense plant itself occupied hundreds of acres of land,

and the company also purchased thousands of additional acres in southwest Orange County, which were developed into large commercial and “We were serving Martin industrial tracts, such as initially with 12 kV (12,000 Orlando Central Park. volts). It was coming all the In tandem with the way from the Lake Highland construction of the Plant. Boy, that is a long defense plant and the haul for that kind of load other properties, large residential neighborhoods for one circuit. So that’s why there was this impetus also sprung up. The new for us to immediately go out OUC Martin Plant there with 115 kV and put in provided water supply a substation.” for the new defense facility and the ancillary – Lou Stone developments that Plant Engineer at the time accompanied it. During this time, the Pine Hills area, located eight miles north of the defense plant, also began to undergo extensive residential and associated commercial development to accommodate many of the plant employees. To support this new growth area, OUC built the Pine Hills Water Plant in 1958 and installed distribution mains to deliver water to customers living in this unincorporated area of Orange County. Because the Martin Plant was located too far from existing lines, OUC built a dedicated water treatment plant to serve the facility and extended a 115 kilovolt (kV) line to provide electric service.

Beneath the Surface: Drawing Water from a New Source — the Floridan Aquifer To provide a safe and reliable drinking water supply for its customers, OUC began in 1957 to

service area and interconnected by means of

from the Floridan Aquifer. As demand increased, withdrawals from the

limits, especially during years when rainfall

Water from the aquifer also offered other

was very low. In addition, the quality of the

advantages: It was high quality compared

less costly treatment; and it was plentiful,

which was very costly. This shift to groundwater meant that plants

eliminating the environmental and aesthetic problems that were caused when lakes

could be located anywhere in the service area,

began to be over-pumped beyond their

because wells could be drilled down to the

aquifer at any location. Thus, water plants could

In 1957, OUC presented the City of Orlando with the Lake Eola fountain. Originally the idea of Linton E. Allen, then President of the First National Bank (now SunTrust), the City landmark was first called the “Centennial Fountain” but was renamed the “Linton E. Allen Memorial Fountain” after the community leader’s death.

be spread out, strategically located within the