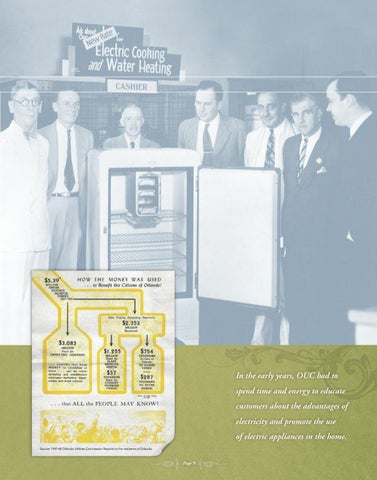 OUC Charter Drafted, First Meeting Held Drafted by local attorney J. Thomas Gurney, the Orlando Utilities Commission (OUC) charter created a five-member Commission. Four citizens of Orlando were named to serve as Commissioners along with the Mayor of Orlando, who was automatically an ex-officio member of the board. These individuals were to serve without pay and be appointed for staggered four-year terms. They could serve second terms if re-nominated by the Commission. The Commission was designed to function as a Board of Directors of a corporation. The individuals who framed the OUC charter took every possible precaution to set up the Commission in a manner that would effectively eliminate political pressure and influence. The first official meeting of the newly formed Orlando Utilities Commission occurred on June 25, 1923 at 10:30 a.m. in the board room of the First National Bank. City Attorney W.B. Crawford asked each member of the Commission to draw a ticket, sight unseen, which established the term of office each new Commissioner would hold. The results were: Judge W.T. Bland, one year; J.F. Ange, two years; L.C. Massey, three years; H.H. Dickson and H.L. Beeman, each four years. It was moved by Ange, and seconded by Massey that the Honorable W.T. Bland be elected President of the Commission for the ensuing year.

Completed in 1934, this project generated

legal authority to add the equipment and

250 jobs at a time when work was virtually

electric and water service to its customers

without approval from the Orlando City

rates from 8 cents per kilowatt hour (kWh) to

turbine at the Lake Ivanhoe Plant.

Throughout the ‘30s, OUC promoted the

The late 1930s saw the addition of another

cost-saving benefits of using electricity with the

slogan “Cook Electrically and Save Money”—

in College Park and a second Lake Ivanhoe

even offering 120 electric ranges for just

5 cents per month, added to a customer’s bill.

OUC not only installed the stoves, but also maintained them free of charge. In 1936, OUC relocated its offices from

In 1936, Martin W. Brown, who began his career as the utility’s first plant engineer, was promoted to General Manager. The following

City Hall to its new office building at Wall and

Main streets in downtown Orlando across the

of keeping the people fully informed about

street from the Southern Bell Telephone

utility operations and “Where the Money Goes”

Company Building and the Orange County

to benefit the taxpayers and the citizens of

Court House. The first floor was occupied by

Orlando. This included the publishing of annual

the cashier, sales and contract department,

reports and informational bulletins on various

B R O W N In the early years, OUC had to

Florida native Martin W. Brown worked his way up through the ranks of the Orlando Utilities Commission on his way to becoming General Manager in 1936. The utility’s first chief engineer, he was promoted to plant superintendent in 1932. He served as secretary and treasurer of the Municipal Utilities Association of Florida, and during World War II, was secretary of the Florida Power Pool State Defense Council.

spend time and energy to educate customers about the advantages of electricity and promote the use of electric appliances in the home. Source: 1947-48 Orlando Utilities Commission Reports to the residents of Orlando.