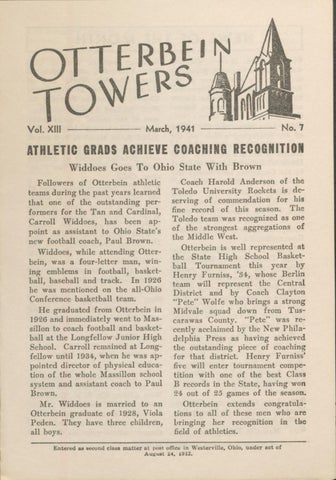 ATHLETIC GRADS ACHIEVE COACHING RECOGNITION Widdoes Goes To Ohio State With Brown Followers of Otterbein athletic teams during the past years learned that one of the outstanding per­ formers for the Tan and Cardinal, Carroll Widdoes, has been ap­ point as assistant to Ohio State’s new football coach, Paul Brown. Widdoes, while attending Otter­ bein, was a four-letter man, whin­ ing emblems in football, basket­ ball, baseball and track. In 1926 he was mentioned on the all-Ohio Conference basketball team. He graduated from Otterbein in 1926 and immediately went to Mas­ sillon to coach football and basket­ ball at the Longfellow Junior High School. Carroll remained at Long­ fellow until 1934, when he was ap­ pointed director of physical educa­ tion of the whole Massillon school system and assistant coach to Paul Brown. Mr. Widdoes is married to an Otterbein graduate of 1928, Viola Peden. They have three children, all boys.

Coach Harold Anderson of the Toledo University Rockets is de­ serving of commendation for his fine record of this season. The Toledo team was recognized as one of the strongest aggregations of the Middle West. Otterbein is well represented at the State High School Basket­ ball Tournament this year by Henry P&#39;urniss, ’34, whose Berlin team will represent the Central District and by Coach Clayton “Pete” Wolfe who brings a strong Midvale squad down from Tus­ carawas County. “Pete” was re­ cently acclaimed by the New Phila­ delphia Press as having achieved the outstanding piece of coaching for that district. Henry Furniss&#39; five will enter tournament compe­ tition with one of the best Class B records in the State, having won 24 out of 25 games of the season. Otterbein extends congratula­ tions to all of these men who are bringing her recognition in the field of athletics.

NEWS OF THE MONTH •Ex-*42 Miss Hope Williams was granted a license to preach by the Quarterly Conference of the Rixford Charge. Miss Wiliams was the speaker at the Duke Center and Rixford Churches on Educa­ tion Day. •’40 John Smart was the author of an interesting article on the present European crisis which ap­ peared in the magazine “The Unofficial Ambassadors/’ published by the Committee on Friendly Re­ lations Among Foreign Students. Manley O. Morton has enlisted in Co. K, 112th Infantry of Brad­ ford, Pa. He is now Private Manley O. Morton, Co. K, 112th In­ fantry, Indiantown Gap Military Reservation, Pa. •Ex-’39 a recent letter from Theda Doran tells us that she is enjoying her life in the sunny climate of Daytona Beach, Florida. •’38 Vinny Arnold seems to be carrying on his college career in at least one way. He is a star basket­ ball player on Franklin’s Texaco Fire Chiefs team. William Catalona, who will re­ ceive the Doctor of Medicine de­ gree from the School of Medicine of Western Reserve University in June, has accepted an internship for next year in Charity Hospital, Cleveland. •’37 Lora Good is now Display Manager for the J. C. Penney Co., in McKeesport, Pa. •’34 Mrs. Chi Kwong Tom, who

is doing graduate work at Ohio State University, spoke before the Young People’s World Day of Prayer meeting at Westminster Church, Dayton, on February 28. •’33 Richard Allaman was chair­ man of the annual Dayton hobby fair which was held at the Y.M.C.A. on March 6, 7, 8 and 9. •’31 Russell H. Broadhead is now exchange teacher at Presidio Junior High School in San Fran­ cisco, Calif. •’30 Dr. Kenneth Buiice, head of the history department at Otterbein, spoke at the Town Meeting in the Columbus Y.M.C.A. on Feb­ ruary 17. His subject was “Japan —What Should Our Policy Be.’’ Dr. Bunce was employed at one time by the Japanese Department of Education as teacher of English at Matusyama Kotogakko. He also traveled in Korea, Manchuria and China. &#39; •’26 We were happy to receive a letter from Alice Sanders Brewster with a lovely description of life in Bermuda. We pass on to you her invitation to have her Otterbein friends visit the “Half-Way House of the Hemispheres’’ while they make their home there. •’24 From another far corner of the world, Freetown, Sierra Leone, West Africa, Mr. S. M. Broderick writes that he would like to see the Alumni Secretary on the matter of prospective students and other alumni matters when his duties as

field secretary bring him into that territory. The item of alumni dues was conspiciously unchecked in Mr. Broderick&#39;s note! •’23 Dr. and Mrs. J. Gordon Howard led the study group on “Getting Along In Our Homes” in the eighth annual series of “church night” programs at Grace Metho­ dist Church, Dayton, recently. Rev. M. B. Klepinger was one of six Dayton ministers who recently gave radio messages from station WHIG in preparation for the opening of a city-wide religious survey. •’22 H. F. Lehman, manager of Frigidaire’s commercial and airconditioning sales department, was in charge of a three-day meeting for 115 commercial refrigeration sales managers and sales engineers from Frigidaire’s district offices in various parts of the country. Paul V. Sprout won the $30 first award in Zone 1 of the 1940 Herald Christmas Home Lighting contest in Dayton. •*21 Dr, J. Ruskin Howe was one of the five speakers who took part in the annual Lenten Institute conducted by First Congregational Church of Columbus. On four suc­ cessive Wednesday nights Presi­ dent Howe spoke on the subjects: ‘‘The Christian Idea of God,” “The Christian Interpretation of Jesus Christ,” “The Christian Un­ derstanding of Prayers,” and “The Christian Interpretation of Im­ mortality.” •’20 Ramey H. Huber was chair­ man of the meeting of the Dayton

chapter of the National Association of Cost Accountants who heard Stephen A. Gillman, certified pub­ lic accountant of Ohio and Wis­ consin, discuss “System of Internal Check.” •’16 Professor Joseph M. Shu­ maker, head of the department of history and government at Cedar Crest College, Allentown, Pennsyl­ vania, since 1924, has been granted the degree of doctor of education by New York University after completing extensive graduate work in the fields of history and college administration. •’15 W. M. Sharp is now in charge of the Taylor Allderdice Evening School and Counselor in the Allderdice High School in Pittsburgh, Pa. •Ex-’14 We rgret to announce the death of Elmer Downey who died on February 21 at his home in Anderson, Indiana. •’10 Merlin Ditmer, who has been freshman football coach at Miami University, will succeed George Rider as athletic director at Miami according to recent changes in the athletic department there. •’09 We extend sympathy to the family of Mrs. A. H. Syler (Mabel Violet Putt) who died on Feb. 15. •’00 Prof. G. G. Grabill lead an informal discussion on the “Organiem of the Organ” at the February meeting of the Westerville branch of the A.A.U.W. •’82 Notice has recently come to our office of death of D. E. Am­ brose. Mr. Ambrose was an uncle of Mr. Hanby Jones, &#39;98.

Otterbein College Westerville, Ohio Published by the Alumni Council in the interest of alumni and friends GERALD RILEY, Editor Issued monthly except July and August

Births: The new future members of the alumni association who are being welcomed for the first time this month are John Kermit Deever whose arrival on February 20 is being announced by his parents, Dr. and Mrs. John O. Deever; ’35, Michael Preg, who was born to Mr. and Mrs. Stephen Preg (Kathryn Krehbiel, ’35) on Janu­ ary 11; Carol Ann Gearhart, the new daughter at the home of Mr. and Mrs. Edwin Gearhart, ’28 (Ernestine Holshouse, ’33) since June 13; Carolyn Elizabeth Nichols whose arrival is being an­ nounced by her parents Mr. and Mrs. H. E. Nichols, *36; the new son of Mr. and Mrs. George Meyer, Jr. (Mary Harsha, ex ’38), and James Howard Taylor whose ar­ rival in December is being an­ nounced by his parents Mr. and Mrs. Vernon E. Taylor, ’33 (Ida Widdoes, ’33).

Marriages: Wedding bells took their toll of Otterbein graduates again this month, and in our cupid notes, we find the names of Miss Ruth E. Havens, ’34, who became the bride of Mr. A. L. Stump on January 18 at Lima, Ohio; Mr. Clyde Jones, ’36, who was married to Miss Naomi Lowe on February 9 in Dayton; and Mrs. Howard Eastman, ’37, who was married to Miss Betty Borden on February 8 at Kirksville, Mo. Miss Doris Ebright, ex ’41, will become the bride of Mr. Benjamin DeHays, Jr., in the early spring.

Scholarship Day—April 26 The alumni are urged to call to the attention of any outstanding young people whom they know that Scholarship Day will be held on April 26. In the general examina­ tions there will be three $200 and three $100 scholarship. In the music examinations there will be three $200 and three $100 scholar­ ships in voice, piano, violin or other instruments. Application may be made through Miss Virginia Hetzler. Director of Admissions.

Alumni are urged to send items roneerning their own nrtivities and those of their friends to OTTERBEIM TOWERS, Westerville, Ohio