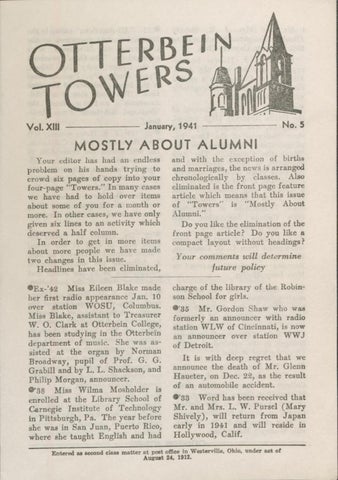 MOSTLY ABOUT ALUMNI Your editor has had an endless problem on his hands trying to crowd six pages of copy into your four-page “Towers/* In many cases we have had to hold over items about some of you for a month or more. In other cases, we have only given six lines to an activity which deserved a half column. In order to get in more items about more people we have made two changes in this issue. Headlines have been eliminated,

and with the exception of births and marriages, the news is arranged chronologically by classes. Also eliminated is the front page feature article which means that this issue of “Towers*’ is “Mostly About Alumni.** Do you like the elimination of the front page article? Do you like a compact layout without headings?

charge of the library of the Robin­ son School for girls.

Miss Eileen Blake made her first radio appearance Jan. 10 over station WOSU, Columbus. Miss Blake, assistant to Treasurer W. O. Clark at Otterbein College, has been studying in the Otterbein department of music. She was as­ sisted at the organ by Norman Broadway, pupil of Prof. G. G. Grabill and by L. L. Shackson, and Philip Morgan, announcer. ^38 Miss Wilma Mosholder is enrolled at the Library School of Carnegie Institute of Technology in Pittsburgh, Pa. The year before she was in San Juan, Puerto Rico, where she taught English and had

•’35 Mr. Gordon Shaw who was formerly an announcer with radio station WLW of Cincinnati, is now an announcer over station WWJ of Detroit. It is with deep regret that we announce the death of Mr. Glenn Haueter, on Dec. 22, as the result of an automobile accident. •’33 Word has been received that Mr. and Mrs. L. W. Pursel (Mary Shively), will return from Japan early in 1941 and will reside in Hollywood, Calif.

Mr. and Mrs. J. R. Shively (Beulah Freightner), are making their home in Canton^ Ohio. Mr. Keith S. Hoover has ac­ cepted a position with the A. B. Dick Co. of Chicago, as a special chemist in charge of the vegetable and oil laboratories. •&#39;32 Carl C. Byers, principal of the Gallia Academy High School, Gallipolis, was recently appointed state chairman of the Ohio Im­ plementation Committee on the “Evaluative Criteria.” The state committee is being sponsored by the Ohio High School Principals’ Association, of which Mr. Byers is a member, with cooperation from the North Central Association, State Department of Education, Ohio College Association, Ohio Education Association, etc. •’31 Charles Burrows has been transferred from U. S. Consulate, Havana, Cuba, to Bolivia. Mr. Burrows was recently married to Miss Lucy Mullin. •’25 Harold Boda, who was for­ merly principal of a Dayton junior high school, is now Assistant Sup­ erintendent in Charge of Curricu­ lum. The position is an important one in light of the recent significant changes in the curriculum of the Dayton school system. •’23 Dr. Daniel Harris, head of the Voice department of Oberlin College, and former soloist of the Metropolitan Opera Company, will present a concert in the College Chapel on March 20. The concert is being sponsored by the Wester­ ville Women’s Music Club.

•’22 “All-American” rating in the National contest sponsored by the University of Alinnesota was achieved by “The Oak,” yearbook of the Upper Darby High School, Upper Darby, Pa. Paul K. Noel is the faculty advisor of the year book. The book also won “AllAmerican” rating from the “National Scholastic Press Assotion.” •’21 Dr. J. R. Howe recently left for a three weeks trip to California. He will attend the convention of the Association of American Col­ leges at Pasadena, and will be the speaker when Otterbein Alumni of southern California meet at Los Angeles. Dr. Howe expects to re­ turn to the campus after filling several other speaking engage­ ments. •’17 Dr. Homer D. Cassel be­ came chief of staff at the Miami Valley hospital in Dayton on Jan. 1, following the annual election participated in by the senior and consulting staffs of the institution. •’14 Mr. T. W. Evans of Cleve­ land, Ohio, who is president of the Florist Association of Greater Cleveland and is district represen­ tative of the Florist Telegraph Delivery Association, recently re­ ceived recognition in a news article of the Plain Dealer for his work as executive chairman of the chry­ santhemum show. Mrs. Evans is the former Maude Owings. •’13 Mrs. Park E. Wineland (Louise Richards), has been ap­ pointed a member of the Dayton School Board and will have an im­ portant part in the current re-

organization of that city’s im­ portant school system. Mrs. Wineland has been interested and active in school affairs for a number of years, having served as P. T. A. president of her local school and later of the county and district Parent Teachers Association. Mr. Wineland is also a graduate of Otterbein in the class of 1911. Their daughter, Mary, will grad­ uate from high school soon and we look forward to having her with us as an Otterbein student. •’10 Prof. J. F. Smith, head of the speech department of the col­ lege, attended the annual meeting of the National Association of Teachers of Speech in Washington, D.C. from Dec. 30 to Jan. 2. While there he met Mrs. Roosevelt at a White House reception. •’05 Dr. and Mrs. B. F. Shively (Grace Ressler), on furlough from Japan, are living in Westerville.

GENERAL ITEMS Among the Otterbein “Boosters” for 1960 will be Donald Royce Shumaker, whose arrival on Jan. 3 is being announced by his parents, Mr. and Mrs. John R. Shumaker, ’37 (Alice McCloy, ’38) ; Mary Sue Shaw, born to Mr. and Mrs. Clar­ ence Shaw, ex-’21, on December 14; Elaine Gloria Covault, whose Otterbein plans were begun on Oct. 25 by her father, Rev. O. L. Covault, ’32; Janice Kay Watts, the new daughter at the home of Mr. and Mrs. Hadley Watts (Ruth Dicus, ’34), since July 14; Jean Lynne Pinsenschaum, who arrived

Dr. Shively received a Japanese lacquer Loving Cup and a parch­ ment Testimonial beautifully writ­ ten in Japanese characters from the Japanese Educational Depart­ ment for his long ‘‘meritorious service to education” upon the ob­ servation of the 50th anniversary of the issuance of the Imperial Rescript on Education, observed on October 30. •’69 The ‘‘Alumni Cane” of Otterbein college will be presented to 94 year old Mrs. D. D. DcLong of Los Angeles by Pres. J. Ruskin Howe, during his visit in Cali­ fornia. The Cane, traditionally given to the oldest living member of the oldest surviving class of Otterbein, was first presented to the widow of Benjamin R. Hanby, Ohio composer of the 19th century, in 1928. Mrs. DeLong, fourth to receive the cane, was a graduate in 1869.

Congratulations and best wishes for this month go to Miss Martha Jean Richmond, *40, who became the bride of Mr. John McGee, *38, on Dec. 22 at the First U. B. Church in Dayton; Miss Betty Bercaw, *40, who was married to Mr. John Flanagan, *39, at the First Community Church in Colum­ bus on Dec. 28; Miss Isabelle Rushworth, *38, who became Mrs. Theodore Mason on Dec. 2 at Palatka, Fla.; Miss Evelyn Carter, *35, who became the bride of Mr. Norman Shaw at the Columbus Avenue U. B. Church in Springfield on Aug. 10; Miss Ruth Jackson, *35, who is now Mrs. J. W. Goldsworthy of Keyser, W. Va., where she and Mr. Goldsworthy are teaching in the high school; and Mr. Ned Short, *ex, who was married to Miss Kathleen Reed on Dec. 1, at Newport, Ky. Lima High School was honored by the National Broadcasting Co. by being selected to produce a Christmas broadcast on the pro­ gram “Music and American Youth.** Otterbein grads who are connected with the Lima schools are Ruth

Frees, **30, Emerson Seitz, *30, Bonita Jamison, *14, and Troy Beldon, ’35. Dr. W. W. Bartlett, head of the department of education, has been elected an honorary member of the Eugene Field National Society of Authors and Journalists, Dr. Bart­ lett received the honor in recogni­ tion of his book “The Man by the Side of the Road.** Other faculty members who took advantage of the Christmas vaca­ tion to attend conventions were: Dr. George McCracken of the clas­ sic languages department who at­ tended the annual convention in Baltimore of the American Philo­ logical Association and Archaeo­ logical institute; Prof. L. L. Shackson, Prof. G. G. Grabill, and Prof. A. R. Spessard of the music depart­ ment who were present at music conventions in Cleveland. Prof. A. J. Esselstyn, Professor of Organic Chemistry at Otterbein, has been elected Grand Master Scientist of Sigma Zeta, national honorary science fraternity, for 1940-41. He received his B. S. De­ gree from Alma College and his M. S. Degree from Cornell Uni­ versity. At present he is working on a Ph.D. Degree in Chemistry at Ohio State University. During the World War and thereafter he was a chemist in the high explosive am­ monium pierate plant at Lansing, Michigan. He is a member of the American Association for the Ad­ vancement of Science, the American Chemical Society, and also the Lambda Upsilon Society.