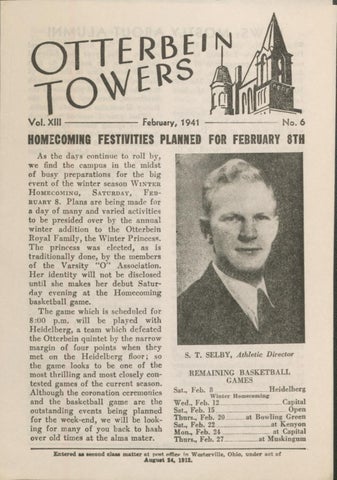 HOMECOMING FESTIVITIES PLANNED FOR FEBRUARY 8TH As the days continue to roll by, we find the campus in the midst of busy preparations for the big event of the winter season Winter Homecoming,

8. Plans are being made for a day of many and varied activities to be presided over by the annual winter addition to the Otterbein Royal Family, the Winter Princess. The princess was elected, as is traditionally done, by the members of the Varsity “O” Association. Her identity will not be disclosed until she makes her debut Satur­ day evening at the Homecoming basketball game. The game which is scheduled for 8:00 p.m. will be played with Heidelberg, a team which defeated the Otterbein quintet by the narrow margin of four points when they met on the Heidelberg floor; so the game looks to be one of tlic most thrilling and most closely con­ tested games of the current season. Although the coronation ceremonies and the basketball game are the outstanding events being planned for the week-end, we will be look­ ing for many of you back to hash over old times at the alma mater. ruary

second class matter at poat office in Westerville. Ohio, under act of

NEWS: MOSTLY ABOUT ALUMNI Mr. and Mrs. Harvey Dillon of New Lebanon are an­ nouncing the engagement of their daughter, Louise Marie, to Roy William Erbaugh, son of Mr. and Mrs. Urban Erbaugh of New Lebanon. •Ex -’33 Dr. Conrad Clippinger of Dayton has left for active duty with the regular army. Dr. Clip­ pinger, who had his offices in the Harries Building, reported to the army medical school at Carlisle, Pa. After one month training there he will be assigned to active duty at Camp Lee, Va. •’26 In a recent news article in the Ohio State Journal, it was an­ nounced that Carroll C. Widdoes, who was formerly assistant to Coach Paul E. Brown at Washing­ ton High School in Massillon, had been retained on Coach Brown’s staff, and will be one of his as­ sistants in his new position of head coach at Ohio State University. The appointment will not become final imtil approved by the athletic board of the University and by Coach Brown. •Ex-&#39;40

•’25 Dr. Francis Pottenger, Jr., of Monrovia, Calif., represented Otterbein College at the opening of Hancock Hall at the University of Southern California, a ceremony in which about 280 colleges of the United States were represented. Dr. Wendell Holmes Camp, one of Otterbein’s well known naturalists, has had the privilege of carrying out one of the most interesting and unusual experi-

ments in the field of natural science. One year he followed spring from the moment its first warmth arose deep in the hills of Mexico, strolled northward with it to the plains and plateaus of the Southwest, then up through the Rocky Mountains and into Alaska. “That year I wanted to watch the way spring moves up through North America,” he explained. “I thought it would be worth while as a botanist to follow the first flowers.” So Dr. Camp left the faculty of Ohio State University and took a steamer to Veracruz, arriving in early December, 1932. From there he moved northward into the high mountain ranges of the Mixtec and Zapotec Indians, a country where he found a new species of orchid. It was atop famous Zempoaltepl that Dr. Camp became the first man, it is believed, to witness the blood sacrifice of the Mije tribe. As spring went north so did the doctor with his presses and drying stoves which he had used to pre­ serve the plants he gathered. Up through Texas and the Rockies, the Pacific Northwest and from Van­ couver he booked passage to Alaska. On Mt. Ranier in Washington he found the Alaskan heather grow­ ing the farthest south it has ever been discovered. Dr. Camp is now assistant curator. New York Botanical Gardens, New York City. •’23 It is with the deepest regret that we announce the death of Dr. J. H. Harris of Westerville, who

died near his home on January 28. Dr. Harris was the father of Dr. Daniel Harris, a member of the music faculty of Oberlin Univer­ sity and a graduate of Otterbein. •&#39;19 Mr. Lawrence K. Replogle, assistant superintendent of Colum­ bus schools, was the toastmaster of the joint dinner of the Columbus and Westerville Otterbein Women&#39;s Clubs on January 25. Dr. James H. Weaver, &#39;08, of Ohio State Uni­ versity faculty, was the principal speaker, giving a travel lecture il­

lustrated with movies made of some of his recent travels. Miss Agnes Wright was in charge of the musi­ cal program. •’15 In checking the contributions which have been made to the alumni fund recently, we found notice of $6.35 which was con­ tributed by the members of this class at commencement time. We regret the delay in acknowledging this contribution, but wish to take this opportunity to express our ap­ preciation.

GENERAL ITEMS (everybody read) Otterbein grads and ex-students who were in Westerville for the 50th wedding anniversary of Mr. and Mrs. C. E. Nichols, &#39;26, were Mr. and Mrs. Clarence Hebbert, &#39;11, Mrs. Paul Miller, Miss Gladys Nichols, &#39;14, Mrs. Harold Geiger, Mr. Ralph Nichols, and Mrs. Ells­ worth Bennett. Mr. Hebbert, who who is an engineer with the Bell Telephone Laboratory in New York, spoke before the Mathe­ matics Club of Ohio State Univer­ sity on October 9, and also spoke before a group at Miami Univer­ sity on October 14. The subjects of his speeches were “Variation of Cable Loss with Temperature&quot; and “Some Applied Mathematics.&quot; Rev. E. R. Turner, President, was in charge of the program when the annual meeting of the Middletown Alumni Association was held on August 13 in Middletown. The main emphasis of the business meet­ ing was placed on a new drive for the Student Loan Fund, and Dr. Mabel Gardner, Mr. Vance E.

Cribbs and Mr. Elmo Lingrel were appointed to head this committee. After a short talk by Mr. Gerald B. Riley, Director of Public Rela­ tions of Otterbein, the annual elec­ tion was held and the following were elected: Elmo Lingrel—President. Mrs. Elmo Lingrel—Vice-Pres. Clark Lord—^Secy.-Treas. The group enjoyed the interest­ ing social hour under the direction of Mrs. Roger Palmer and Miss Evangeline Spahr, and the meeting adjourned at 9:30 P.M. The report of the Middletown Alumni Association Loan Fund is as follows: $470.00 out in loans. $190.00 reloaned for second time. Nine students have been helped by the fund to date. Otterbein “Homecomers&quot; for the year 1960 will include Sandra Gay McKnight, whose arrival on No­ vember 18 is being announced by \ 1941 ----------------------------------

lier parents, Mr. and Mrs. Wilbur McKnight, *29 (Ruth Hayes, *27); Marforie Lou Goddard, the new daugliter of Mr. and ^Irs. James Goddard (Marjorie Bowser, *36), born on January 26; Linda Ann Hoover, whose Otterbein plans were begun on Marcli 23 bv her parents, Mr. and Mrs. K. S. Hoover, *33 (Evelyn Tussey) ; Rol­ and Mason Cheek, whose arrival on January 27 is being announced by his parents, Mr. and Mrs. Harold R. Cheek, *36 (Anita Bundy, *36); and the new son born to Mr. and Mrs. Arthur Williams (Pauline Howe, *31) on January 7. The following is a list of alumni with whom the College has lost contact in the past few years. We are giving the latest address wliich we have for them and hope tliat you will be able to tell us tlic whereabouts of many of them. Thank you for your cooperation in helping us keep the alumni mailing list up-to-date. Frank D. Adams, Corunna, Ind.; Mrs. Charles Busch, Bettsville, Ohio; Rev. David Ambnose, 13t7 N. Boston PI., Tulsa, Okla.; Mrs. G. W, Banks, Winchester, Va.;