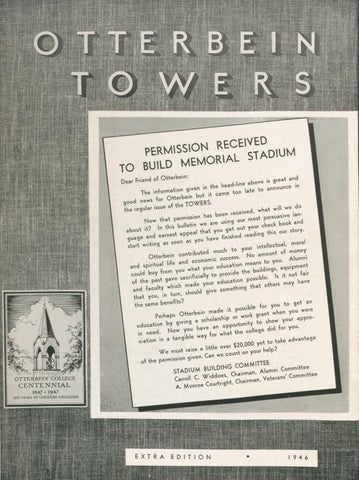 It wav for what the colle3e Ciation in a tang^b

of the permission given.

Board of Trustees Approve

The Civilian Production Administration, the federal agency charged with approving or refusing all applications to build, has given the green light to go ahead with the erection of the proposed stadium^ dormitory project. This approval was officially given on Monday, July 8. The agency does not give any priorities on building materials, but since the structure will be built largely of non^critical materials—cement and re-enforcing steel—priorities will not be necessary. The college agreed not to use wood seats over the concrete until the emerg­ ency is passed. Another favorable condition is that most of the labor required can be non-skilled and some of it can be recruited from veterans living in Wes­ terville who are not attending the summer school.

The college board of trustees in annual session on June 8 approved officially the proposed Memor­ ial Stadium and included it in the Centennial objectives. The board charged, however, that con­ struction should not begin until the funds necessary to build have been provided. This policy adopted by the board some time ago represents good busi­ ness judgment and will forever prevent the college from becoming encumbered with debts. Believing that this project is well within the capacity of alumni to realize, the board urged that the cam­ paign among alumni and veterans be pushed to an early consummation. That the stadium is to be a memorial to Otterbein’s war dead caused the board to look with special favor on the project because it will be a worthy, lasting and useful memorial.

WHAT WILL WE DO ABOUT IT? Alumni—Veterans! The issue is squarely up to us. All major hurdles have been overcome except the financial. One half of the money is in hand. We must provide the balance. As alumni we have derived the most from Otterbein; we now owe it to ourselves to give back to her a reasonable gift.

We Must Act Quickly Nine hundred eighty-three seats have been sold in the new Memorial Stadium, but we must sell 1,017 more—and we must do it soon. It will require from sixty to ninety days to pour the concrete, so the construction will have to begin by August 15 to have it ready by November 8—the date of the fall Home­ coming. The student rooms beneath the stad­ ium could be finished in time for the second semester. Send your check tgday for one or more seats or, if you prefer, a short-time pledge will be accepted. The important thing for us to know is how many seats you will buy. Pledges will be accepted payable up to No­ vember first. Surely every alumnus and ex-student ex­ pects to make a contribution to the Centen­ nial before the celebration next June. Do it now so it can apply on the special alumni project and so the stadium can be dedicated at the fall Homecoming.

It would be an unfavorable reflection on us if we failed to create this memorial. But we shall not fail, for

Never Shall It Be Said — A frequent criticism of stadiums is that they cost too much money for the few times a year they are used. Never shall that be said of the Otterbein stadium, for it is to be a dormitory&#39;Stadium, and will provide permanent housing for up to forty^six boys. The stadium will be approximately 170 feet long (extending from 22&#39;yard line to 22&#39;yard line), 52 feet wide and 26 feet high at the back. This height will be sufficient to build two floors of rooms beneath the seats and still have sufficient dressing, shower and storage rooms. The stadium will there&#39; fore fill a threefold need at Otterbein—a dormitory —seating facilities for games—a worthy memorial. Never shall it be said that this building is too costly.

The need for additional dormitory accommoda&#39; tions at Otterbein is not simply a temporary con^ dition occasioned by the influx of G.I.’s. At present Cochran, King and Saum Halls and four cottages are crowded with girls and do2;ens more are clamor­ ing for admission. The new Barlow Hall, if it were erected, could easily be filled with girls for this fall. The only accommodations now available for men are three fraternity houses, private rooms in town (and there are not very many of them) and the temporary facilities supplied by the government. There will always be a need for the housing which the stadium will provide. The dormitory features will be modern in every respect and will make most acceptable living quarters. A number of colleges are now providing housing in their stadiums.

A GENUINE SERVICE TO VETERANS Our country took twelve million men out of their normal pursuits for one to four years. cational plans delayed.

They want to enter college now.

give forty-six more veterans a break if we had our stadium-dormitory.

Will we help them?

The drawing below was the original conception of what the new Otterbein Stadium would look like. Since the time of that drawing the idea of a dormitory-stadium has been projected and some changes will have to be made in the exterior dimen­ sions. Latest developments call for a stadium which is shorter but wider and higher. This will make pos­ sible two floors of dormitory rooms and also put more seats on and near the fifty-yard line. New exterior and interior drawings will be available soon.

The drawings for the proposed library, women’s dormitory, dining room and stadium have been pre­ pared under the direction of Mr. Eugene T. Benham, of the architectural firm of Benham, Richards and Armstrong, of Columbus, Ohio. At the last meeting of the Board of Trustees Mr. Benham was designated as the official college architect. He is making a thorough study of the campus and will in the near future present plans for expansion over the next century. &#39;The college is one hundred years late in securing this kind of professional advice.

Stadium Committees Three committees are directing the promotion and plans for the Memorial Dormitory-Stadium. They are as follows:

The faculty, students, business organizations, clubs. United Brethren Church and friendly citizens of Westerville have pledged over $62,000 toward the Centennial. Despite this fine record it is known that many citizens want to contribute something to the stadium especially since it is to be a memorial to the boys and girl most of whom were known by many of the citizens.

The local Alumni Varsity “O”, desiring to co­ operate in helping make possible the Memorial Stadium, is now conducting a campaign in town to secure additional support for this worthy project.

The Veterans in College

Not For Twenty Years The last major financial appeal was nearly twenty years ago when the gymnasium was erected. Surely alumni will not feel exploited when the college asks now for contributions to worthy objec­ tives in her Centennial year. This is the most sig­ nificant event in Otterbein’s history. If never before, and if never again, give now.

A campaign is being conducted by veterans among their group in college to help reach the goal of $15,000. Already this group in college, num­ bering about ten per cent of all Otterbein veterans, have contributed about half as much as the ninety per cent of service men and veterans out of school. This is commendable on their part and should be an incentive to all others to come through with a contribution.

Would you like to have a complimentary ticket to the stadium dedication? Buy a seat for $20 and the ticket is yours. There is no assurance that the field can be dedicated at Homecoming, but there is no law against hoping. You can help make it pos­ sible.

(Send to Collcsc or Class Representative)

•BUY A SEAT IN THE MEMORIAL STADIUM&#39;