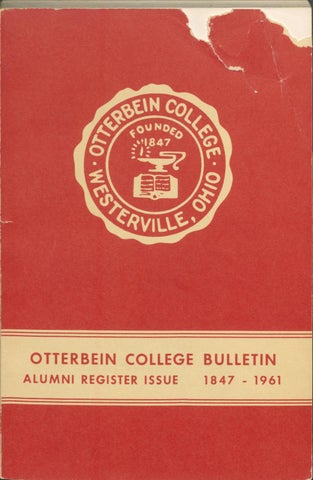 THE OTTERBEIN COLLEGE ALUMNI ASSOCIATION desires to express its appreciation to Mrs. Frank O. Clements, â&#x20AC;&#x2122;01, who has underwritten the cost of editing and publishing this Alumni Register. The interest, loyalty and generosity of Mrs. Clements are an inspiration to all officially connected with Otterbein and everyone who uses this register will be indebted to her.

In the early years of the nineteenth century, when English warships were ’’impressing” American sailors on the ground that they were native-born English­ men (which many of them were), the motto of the British government was Once an Englishman, always an Englishman.” Colleges like to ’’impress’ a similar concept upon their alumni--thus, ’’Once an Otterbeinite, always an Otterbeinite. (If this sounds awkward, consider the problem of an alumnus of the Massachusetts Institute of Technology.) Graduates of good colleges are usually happy to ac­ knowledge this indelible allegiance. No matter how distorted it may be by nos­ talgia or pride or fading memory, there is something noble and magnificent about the mutual affection between alumni and their alma mater. Not only does this maternal bond exist, but the accident of attending the same college at the same time creates another kind of indestructible relationship. Students who may have had no previous knowledge of each other s existence be­ come life partners as a result of this contiguity. They need no alumni register now to keep in touch with one another. Others, however, almost equally drawn to­ gether during their college years, are separated afterward by the workings of des­ tiny, and find themselves ultimately completely out of contact. For this kind of friendship, an accurate register becomes invaluable, bridging the gap of time and distance to focus memory once more upon a few golden years in Westerville. There is fascinating information in this directory. It reveals that Otterbein alumni are living in every part of the world, from Sunbury, Ohio to New Delhi, India - from the banks of Alum Creek to the shores of the Caspian Sea. You will find in this book the names of the Foreign Minister of the Republic of Sierre Leone, the American Ambassador to Honduras, the man who wrote the directive which ended emperor worship in Japan, a Vice President of the United States, the organizer of the Anti-Saloon League, the founder of the Westminster Choir School, a Secretary of Agriculture, a Senator from Ohio, the first missionary to West Africa, several college presidents, bishops of the EUB church, artists, educators, physi­ cians, judges, scientists, writers, and business men of note. You will see many names borne by members of the present student body. You will conclude that the contribution which the seven thousand alumni of Otterbein College have made to the nation, and indeed to the world, is beyond measurement. I should like to add a brief personal note. Although Mrs. Turner and I are proud of our own alma mater, a sister institution where we met and fell in love, we are equally proud of the honor conferred upon us by inclusion in this register under the heading of Honorary Alumni of Otterbein College. Our association with Otterbein has brought us a wealth of friendship, a treasury of rich experience, and membership in an honorable and worthy company. ’’Lest auld acquaintance be forgot--” V

The Otterbein College Alumni Association is proud to present the 1961 Otterbein College Alumni Register. We feel sure that graduates and ex-students everywhere will prize this volume because no register has been published since 1947. The production of this register has been an arduous task. We express our deepest gratitude to Mrs. Helen Ensor Smith, ’18, Mrs. Jean Unger Chase, 43» ^d Mrs. Ethel Shelley Steinmetz, ’31, who have worked faithfully and competently in compiling the records. It is fice secure time. Some the register register is

our sincere hope that alumni and ex-students will help the alumni of­ information on those for whom no record is available at the present individuals have changed addresses since we began work on compiling more than a year ago. Other addresses will be incorrect before the printed. In all of this, we have done our best and sincerely hope

everyone will be understanding of our efforts. It has been a pleasure to do this work because we feel that this is a dis­ tinct service we can render our alma mater and all of her sons and daughters. Arthur L. Schultz, ’49 Executive Secretary, Alumni Association

these general information paragraphs. Alphabetical Index . ,,„habetically including all graduates, non-graduates, Names are and Special Students. Academy, .Music, Art, umm partied ate listed in two ways: (1) U"<1“ Names of alumnae who are in parentheses, as'Abbott, Alice n^aiden name with married name with the maiden name thereafter (Mrs Ilo Dtl''"fro ril-ce Abbott.) Dellinger, Mrs I C Hows* date alone indicates year degree was grant Abbreviations are as to ' different years; X indicates ex-stued; two dates ^^^'’^^s/ociate in General Education; Ar - Art; M - Music; f"special-^ss"^Tummer School; Unci - Unclassified. ^ , -j i:^rs eive home address, business and business address. Lack of^ddrifs'inl'cates the committee was unable to secure this information. • 1 r.r^rf*des the names of deceased alumni. All alumni prior An asteris (^P unknown for several years has been assumed deceas^Jd. If no'^asteHsk (*) appears before the name and no information follows, the committee was unable to secure any in ormation. Class Rolls The class rolls include the graduates and non-graduate members. Only the degree earned at Otterbein is shown. Geographic Lists T • u u „ ^^mniled of graduates and non-graduates according to the Lists have ee Suburban towns as East Cleveland, Cleveland cities and towns within ‘^Cleveland”. Grandview, Upper Arlington et al Heights et al are listed f,he geographic list, under "Columbus”. Only one address is given s s f Academy j l.-Qfed in the same way as college students. The Academy students .. cases) the last year of attendance in year following the name in i jj^ademv are not indicated inasmuch as most of the academy. Graduates from the acaaemy these became regular college stu ents Music and Art Regular college and academy students taking music and/or art are not re­ listed in fhese departments. The year of study is indicated by the numeral fol­ lowing Jhe name. No attempt was made to list names of children in the preparatory classes.

Summer School and Special Academic Only names of students enrolled in the above who have been on the regular mailing list are included. Vlll

The Alumni Association was organized in 1863, although no record of its officers is included before the catalogue published in 1874. Year Elected President

TRUSTEES OF THE COLLEGE

At the General Conference of the United Brethren Church in 1845 acÂ­ tion was taken favoring the establishment of institutions of learning owned and controlled by the church. Such action was recommended to the attention of the annual conferences. The Scioto Conference convening October 26, 1846 resolved upon the establishment of a school, purchased the Blendon Young Men's Seminary of Westerville, Ohio and elected a Board of Trustees. In February 1847, the Sandusky Conference voted to cooperate. The trustees of these two conferÂ­ ences met for the first time April 26, 1847, founding an institution with the name of "Otterbein University of Ohio." In 1853 Miami Conference voted to cooperate with the first two, and later other church conferences joined. In 1883 the Trustees authorized the seating of alumni representatives on their board. Accordingly in 1884 the first alumni trustee, G. M. Mathews, '70, was elected by the Alumni Association as its representative and he was seated with other trustees in June 1884. The Board of Trustees in 1891 passed a resolution authorizing the election of trustees at large, and in June 1892 H. Clay Frick was elected to such office. In 1893 George W. Hartzell was elected and the following year three others were elected for a period of six years, this plan being followed to date. The twelve members of the Executive Committee of the Board of Trustees are elected by and from the Board. Six are elected at each annual meeting for two-year terms.

HONORARY DEGREES CONFERRED An honorary degree committee from the faculty each year nominates several canÂ­ didates whom it deems worthy of special recognition. Approval by the faculty and the Board of Trustees is necessary before any honorary degree is granted. Honorary degrees have not been awarded every year, the first one having been granted in 1865 and others in seventy three different years thereafter. HONORARY DEGREES Flickinger Rev D K DD Meily Rev C S MA

HONORARY ALUMNUS AWARD Since 1950, the Alumni Association of Otterbein College has bestowed the Honor­ ary Alumnus Award upon the following individuals because of their interest and loyalty to Otterbein:

DISTINGUISHED ALUMNUS AWARD Since 1951, the Alumni Association of Otterbein College has bestowed the Distin­ guished Alumnus Award upon the following graduates:

Cook & TankeeOhio A (Maude B