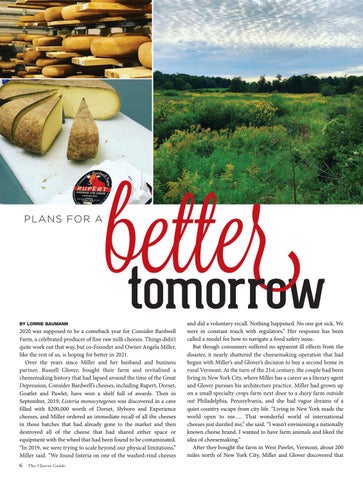 2020 was supposed to be a comeback year for Consider Bardwell Farm, a celebrated producer of fine raw milk cheeses. Things didn’t quite work out that way, but co-Founder and Owner Angela Miller, like the rest of us, is hoping for better in 2021. Over the years since Miller and her husband and business partner, Russell Glover, bought their farm and revitalized a cheesemaking history that had lapsed around the time of the Great Depression, Consider Bardwell’s cheeses, including Rupert, Dorset, Goatlet and Pawlet, have won a shelf full of awards. Then in September, 2019, Listeria monocytogenes was discovered in a cave filled with $200,000 worth of Dorset, Slyboro and Experience cheeses, and Miller ordered an immediate recall of all the cheeses in those batches that had already gone to the market and then destroyed all of the cheese that had shared either space or equipment with the wheel that had been found to be contaminated. “In 2019, we were trying to scale beyond our physical limitations,” Miller said. “We found listeria on one of the washed-rind cheeses 6

and did a voluntary recall. Nothing happened. No one got sick. We were in constant touch with regulators.” Her response has been called a model for how to navigate a food safety issue. But though consumers suffered no apparent ill effects from the disaster, it nearly shuttered the cheesemaking operation that had begun with Miller’s and Glover’s decision to buy a second home in rural Vermont. At the turn of the 21st century, the couple had been living in New York City, where Miller has a career as a literary agent and Glover pursues his architecture practice. Miller had grown up on a small specialty crops farm next door to a dairy farm outside out Philadelphia, Pennsylvania, and she had vague dreams of a quiet country escape from city life. “Living in New York made the world open to me…. That wonderful world of international cheeses just dazzled me,” she said. “I wasn’t envisioning a nationally known cheese brand. I wanted to have farm animals and liked the idea of cheesemaking.” After they bought the farm in West Pawlet, Vermont, about 200 miles north of New York City, Miller and Glover discovered that