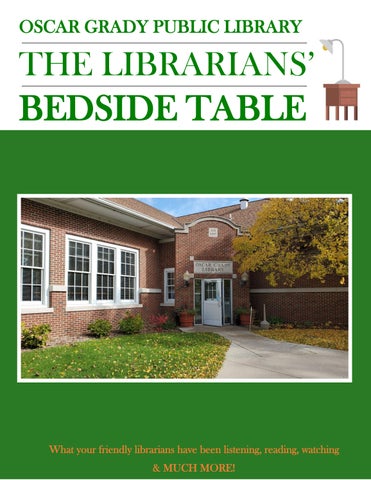 What your friendly librarians have been listening, reading, watching &amp; MUCH MORE!

Oscar Grady Public Library Mission Statement: The mission of the Oscar Grady Public Library is to provide high interest, high demand materials and make them readily available from the Library’s collection or through interlibrary loan. The Library supports lifelong learning, information and recreational needs for people of all ages and abilities. Special emphasis is placed on stimulating children’s interests and appreciation for reading and learning. The integration of new technology with traditional library resources is used to expand service beyond the Library’s physical walls.

Check out what our librarians are recommending. Select the title to link to each item in the Monarch Catalog. We hope you enjoy this selection of books from your librarians at the Oscar Grady Public Library!

Who is Maud Dixon by Alexandra Andrews (2021) Florence Darrow is a small-town striver who believes that she&#39;s destined to become a celebrated writer. When she stumbles into the opportunity to become the assistant to &quot;Maud Dixon”… The arrangement feels idyllic… But when Florence wakes up in the hospital after a terrible car crash, and Helen is dead, she begins to imagine what it might be like to &#39;upgrade&#39; into not only Helen&#39;s life, but also that of Helen&#39;s bestselling pseudonym, Maud Dixon... --Goodreads review

Our Wisconsin collection is growing! Check out these latest titles!

The Mistress by Danielle Steel Natasha was a struggling young Russian girl when Vladimir rescued her off the streets and made her his mistress. Vladimir is one of the richest men in Russia who either buys what he wants or takes it by force. He lavishes Natasha with clothes, jewelry, and furs. Natasha is very happy with her position in Vladimir’s life. Maylis has lived with Lorenzo, a famous artist, for many years and finally has a child, Theo, with him. Lorenzo cannot marry Maylis because his ex-wife is still alive and he does not believe in divorce. When Theo is ten years old and Lorenzo is nearing 80, he learns his exwife has died, so he marries Maylis. Gabriel Ferrand is an art dealer and close friend of Lorenzo and his family. He finally convinces Lorenzo to sell one painting. The painting sold for an extremely high price setting a base price for any future sales. When Lorenzo passes away, he leaves his paintings and house to Maylis and Theo who is now an artist. Maylis turns the six- bedroom home into a restaurant which showcases Lorenzo’s art. Vladimir and Natasha come to eat at the restaurant and see the art work. Vladimir wants to buy a painting that is not for sale. Theo is consumed with Natasha’s beauty. Knowing Vladimir always gets what he wants and controls every move Natasha makes, you can see many conflicts in the future. Will Vladimir get the painting? Will Vladimir and Natasha ever marry? Will Theo get Natasha? The book is full of suspense, romance, and descriptions of great wealth.

Master and Commander By Patrick O’Brian This … establishes the friendship between Captain Aubrey, R.N., and Stephen Maturin, ship&#39;s surgeon and intelligence agent, against a thrilling backdrop of the Napoleonic wars. Details of a life aboard a man-of-war are faultlessly rendered: the conversational idiom of the officers in the ward room and the men on the lower deck, the food, the floggings, the mysteries of the wind and the rigging, and the roar of broadsides as the great ships close in battle.

Partners in Crime: A Tommy and Tuppence Collection by Agatha Christie Tommy and Tuppence Beresford are restless for adventure, so when they are asked to take over Blunt&#39;s International Detective Agency, they leap at the chance. Their first case is a success-the triumphant recovery of a pink pearl. Other cases soon follow … But can they live up to their slogan of &quot;Any case solved in 24 hours?&quot; - description from publisher

Bullet Train Directed by David Leitch I thoroughly enjoyed this American action comedy thriller film. I didn&#39;t realize that it is based on a novel that came out in 2010 titled Maria Beetle (Bullet Train for the US edition) by Kōtarō Isaka. Ladybug is an unlucky assassin determined to do his job peacefully after one too many gigs gone off the rails. Fate, however, may have other plans, as Ladybug&#39;s latest mission puts him on a collision course with lethal adversaries from around the globe, all with connected, yet conflicting, objectives, on the world&#39;s fastest train. - description from publisher

The Pigeon Will Ride the Roller Coaster by Mo Willems Pigeon experiences an emotional loopde-loop as he anticipates his turn to ride the roller coaster. -description from publisher

Open Season by C.J. Box Joe Pickett is the new game warden in Twelve Sleep, Wyoming, a town where nearly everyone hunts and the game warden -- especially one like Joe who won&#39;t take bribes or look the other way -- is far from popular. When he finds a local hunting outfitter dead, splayed out on the woodpile behind Joe&#39;s state-owned home, he takes it personally. There had to be a reason that the outfitter, with whom he&#39;s had run-ins before, chose his backyard, his woodpile to die in. Even after the &quot;outfitter murders,&quot; as they have been dubbed by the local press after the discovery of the two more bodies, are solved, Joe continues to investigate, uneasy with the easy explanation offered by the local police. He soon discovers that the outfitter brought more than death to his backdoor: he brought Joe an endangered species, thought to be extinct, which is now living in his woodpile. But if word of the existence of this species gets out, it will destroy any chance of InterWest, a multi-national natural gas company, building an oil pipeline that would bring the company billions of dollars across Wyoming, through the mountains and forests of Twelve Sleep. The closer Joe comes to the truth behind the outfitter murders, the endangered species and InterWest, the closer he comes to losing everything he holds dear. -description from publisher

Funny Farm by Laurie Zaleski An inspiring and moving memoir of the author&#39;s turbulent life with 600 rescue animals. Laurie Zaleski never aspired to run an animal rescue; that was her mother Annie’s dream. But from girlhood, Laurie was determined to make the dream come true … She was planning to relocate Annie and her caravan of ragtag rescues ―horses and goats, dogs and cats, chickens and pigs― when Annie died, just two weeks before moving day. In her heartbreak, Laurie resolved to make her mother&#39;s dream her own. In 2001, she established the Funny Farm Animal Rescue outside Mays Landing, New Jersey. Today, she carries on Annie’s mission to save abused and neglected animals. Funny Farm is Laurie’s story: of promises kept, dreams fulfilled, and animals lost and found. It’s the story of Annie McNulty, who fled a nightmarish marriage with few skills, no money and no resources, dragging three kids behind her, and accumulating hundreds of cast-off animals on the way. And lastly, it&#39;s the story of the brave, incredible, and adorable animals that were rescued. Although there are some sad parts (as life always is), there are lots of laughs. - description from Amazon.com

The Identicals by Elin Hilderbrand The instant New York Times and USA Today bestseller about two identical twin sisters who couldn&#39;t look more alike . . . or live more differently. Nantucket is only eleven miles away from Martha&#39;s Vineyard. But they may as well be worlds apart for estranged twin sisters Harper and Tabitha Frost. After not speaking for more than a decade, Harper and Tabitha switch islands-and lives-to save what&#39;s left of their splintered family. But the twins quickly discover that the secrets, lies, and gossip they thought they&#39;d outrun can travel between islands just as easily as they can. Will Harper and Tabitha be able to bury the hatchet and end their sibling rivalry once and for all? Before the last beach picnic of the season, there will be enough old resentments, new loves, and cases of mistaken identity to make this the most talked-about summer that Martha&#39;s Vineyard and Nantucket have experienced in ages. -description from Amazon.com

NOW PLAYING! More and more albums are being added to our collection of vinyls for you to check out. Artists in a great variety of genres await for you and your needle to enjoy music at 33 1⁄

By Michelle Balz It’s that time of year to close down the garden for the season. This also means it’s time to start reading and dreaming new dreams for next season! This book will help us give back to our gardens as well as our earth!

In No-Waste Composting, you’ll discover the how and whys of composting and find over a dozen practical step-by-step plans for building both indoor and outdoor composting systems that require a minimal amount of space. ...Small-space composting has never been easier, more efficient, and more eco-friendly. Composting keeps millions of tons of waste out of landfills and creates carbon-sequestering, nutrient-dense compost that can be used to help fuel plant growth (including houseplants!) and build soil health. -description from Amazon.com

Check them out! Love them, enjoy them, treasure them.

The Orville (Season 1 and Season 2) Are you a fan of Sci-fi, drama, and comedy? If so, The Orville is for you. Called by its creator, Seth Macfarlane, and fans alike as a love letter to the Original Star Trek. The Orville has everything you could ever want from a Sci-Fi Comedy. One of the best parts about this series is the fact that each episode doesn’t feel like a traditional TV episode, but more like an individual movie. 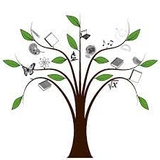