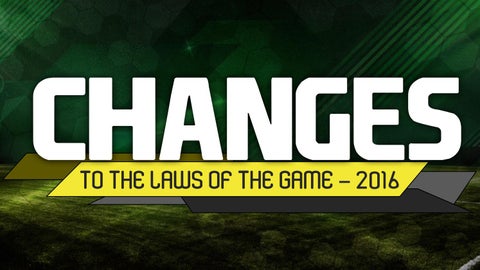 WHAT you need to know We realize that you, as coaches, are solely focused on your teams and your games. You’ve heard there are rule changes this year, but may not have had time to research what they are and how they may affect your teams. This is where we come in. We’ll show you… What rules have changed from last year. How these changes affect your teams. What referees will be looking for in games. How you can prepare better for the season.

WHAT Weâ&#x20AC;&#x2122;ll show you We will provide you with a quick glance at the main rule changes that summarize the changes that affect you. There are, however, lots of changes which will we make available in their entirety in a separate presentation.

As complicated as soccer can be to the novice spectator, there really are very few rules that govern it. Probably a lot fewer than you thought. Did you know… FIFA only has 17 ‘laws’ for soccer. 13 of those had changes this year. Only 4 of those were considered major changes. They take affect Fall 2016.

ITS A TOUGH JOB

Law One deals with the field you play on. Dimensions, the surface, and how the field is set up for your game. That includes the flags and what it’s made of. WHAT MIGHT AFFECT YOU: •

Artificial and natural surfaces cannot be combined…so, for example, you can’t have a turf goalkeeper box and grass on the rest of the field. Let your clubs know.

Law Two deals with the ball you play with. Size, shape, weight and pressure. WHAT MIGHT AFFECT YOU: Good news! There are no changes this year for the ball. Just make sure itâ&#x20AC;&#x2122;s round! Get your kick on.

Law Three deals with the number of players you have on the field. WHAT MIGHT AFFECT YOU: •

Direct free kick if a sub/team official interferes with the play.

If something other than a player touches a ball going into the goal the ref can award a goal if the touch had no impact on defenders.

If a goal is scored with an extra player in the field, the goal stands and the game continues.

Law Four deals with the gear that the players wear on the field. WHAT MIGHT AFFECT YOU: •

Any tape or other material on a player’s socks must match the color of the sock.

Law Five deals with the ref. We all need refs to play the game, and they’ve had changes, too. WHAT MIGHT AFFECT YOU:

Not a lot to be honest. There were some clarification points about red cards over yellow cards, but for the most part it remained the same.

Law Six deals with the other officials involved in match play which are the Assistant Referees, and fourth officials. WHAT MIGHT AFFECT YOU: Good news! There are no changes this year that affect your role as coaches. Just be nice, and use your manners!

Law Seven deals with the time it takes to play the game we all love. This includes added time at the end of the game. WHAT MIGHT AFFECT YOU: Good news! There are no changes this year that affect your role as coaches. Make sure you play to the final whistle.

START AND RESTART law eight Law Eight deals with the way a game is started initially, and restarted after a stoppage in the play. WHAT MIGHT AFFECT YOU: Starting a game now became simpler! â&#x20AC;˘

The ball can travel in any direction at kick off, which means now you can just have one player take the kick and play it straight back.

Remember though, everyone needs to be in their own half when the ball is kicked.

IN AND OUT OF PLAY law nine Law Nine deals with how a ball goes in and out of play, and what is considered the boundaries of the field. WHAT MIGHT AFFECT YOU: No changes in this rule from previous seasons. If a ball rebounds off any match official, including ARs it is still considered in play unless the whole ball cross the boundary first.

PENALTY KICKS law Ten Law Ten deals with the penalty kick. This is during the course of play, AND the end of the game where needed. WHAT MIGHT AFFECT YOU: There is a little clarification about evening out teams before you start a shootout (they have to have the same number of players. Also there are two coin tosses now. One for end, and one for first kick.

OFFSIDE law Eleven Law Eleven deals with offside…arguably the most debated call on the field at any given time. WHAT MIGHT AFFECT YOU: •

A defender off the field over their own end line is considered ‘inactive’ until their own team clears the ball away from their penalty box and up field.

This is also the same for an attacking player. If they’re off the field they’re inactive.

If a goal is scored and an attacker is standing inside the goal he/she is considered offside.

FOULS AND MISCONDUCT law twelve Law Twelve deals with fouls and misconduct. There were quite a few changes so we need a few pages to get through this one. Read carefully. WHAT MIGHT AFFECT YOU: •

There is a change in wording for a handball automatically being a yellow card. It’s now linked to stopping/interfering with a promising attack.

Attempted violent conduct is a red card, regardless of contact. So a punch that is swung and misses, is still an ejection.

Striking on a head/face when not challenging an opponent is a red card unless the contact is minimal.

If a foul takes place off the field, as part of normal play, it’ll be penalized with a direct free kick on the boundary line closest to the point of offense. So, yes, that means if it’s over the end line and a defender makes a foul, it can be a penalty.

Some DOGSO (denying an obvious goal scoring opportunity) are now just a yellow card. It is still a red card if it is handball, holding, pushing, pulling, or if there is no possibility to play the ball.

FOULS AND MISCONDUCT law twelve (cont.) The new wording for the rule is: â&#x20AC;&#x153;Where a player denies the opposing team a goal or an obvious goal scoring opportunity by a deliberate handball offense the player is sent off wherever the the offense occurs. Where player commits an offense against an opponent within their own penalty area which denies an opponent an obvious goal scoring opportunity AND the ref awards a penalty kick the offending player is just given a yellow card.â&#x20AC;? One obvious example of this is that a defender is not sent off for non-deliberate handball that stops a goal this year if the ref awards a penalty. In prior years intent was not considered.

FREE KICKS law thirteen Law Thirteen deals with the taking of free kicks in the game. WHAT MIGHT AFFECT YOU: Not a whole lot here, but they added a word in to help clear up an issue. •

The ball is in play when it is kicked and clearly moves.

So, let’s make sure the ref sees the ball move when you touch it to an opponent.

PENALTY KICKS law fourteen Law Fourteen deals with the taking of penalty kicks in the game. WHAT MIGHT AFFECT YOU: No changes here. Just make sure the ball is kicked forward, and the taker doesnâ&#x20AC;&#x2122;t feint or stop his/her approach to the ball.

THE THROW IN law fifteen Law Fifteen deals with the taking of a throw in during the game. WHAT MIGHT AFFECT YOU: Again, no real changes here. There was a clarification in the wording to ensure that a player takes it with both hands. Also, clarifying that all other players must be a minimum of 2 yards away.

THE GOAL KICK law sixteen Law Sixteen deals with the taking of a goal kick during the game. WHAT MIGHT AFFECT YOU: Again, no real changes here but three points of clarification: •

The ball has to be stationary when kicked.

If it’s kicked into your own goal, it’s a corner.

If an attacker in the box when it’s kicked, they can’t touch it until someone else has.

THE CORNER KICK law seventeen Law Seventeen deals with the taking of a corner kick during the game. WHAT MIGHT AFFECT YOU: Just one change here, and it only applies to those with crazy super human strength! â&#x20AC;˘

Also, if you have a kid who can kick like that, get them in the NFL quickly!

So now you know what the changes are, we wanted to take a second an show you some of them in action! The next few pages contain video examples of a few of the rules changes weâ&#x20AC;&#x2122;ve just described. FIFA has 17 rules for soccer. 15 of those had changes this year. 4 of those were considered major changes. They take affect Fall 2016.

The following video shows the new rule regarding offside and how it is implemented. REMEMBER THE FOLLOWING POINTS: •

A defender off the field over their own end line is considered ‘inactive’ until their own team clears the ball away from their penalty box and up field.

This is also the same for an attacking player. If they’re off the field they’re inactive.

If a goal is scored and an attacker is standing inside the goal he/she is considered offside.

FOULS AND MISCONDUCT law twelve The following video shows the new rule regarding fouls and misconduct and how it is implemented. REMEMBER THE FOLLOWING POINTS: •

New DOGSO rule about handball…it must be deliberate to warrant a red card. Accidental handball resulting in a penalty kick is a yellow now.

The other types of fouls are still punishable with a red card.

THIS SEASON for questions: david@oregonyouthsoccer.org 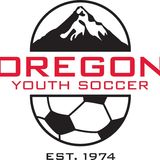 An easy at-a-glance look at the new laws and how they affect you as a coach for the Fall 2016 season.

An easy at-a-glance look at the new laws and how they affect you as a coach for the Fall 2016 season.