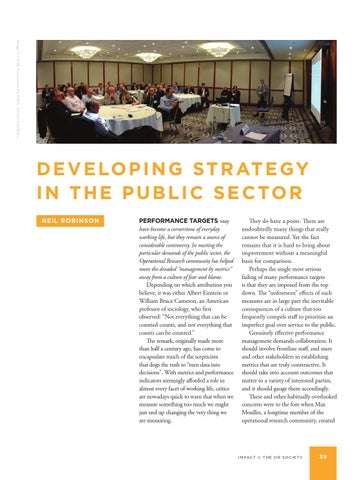 PERFORMANCE TARGETS may have become a cornerstone of everyday working life, but they remain a source of considerable controversy. In meeting the particular demands of the public sector, the Operational Research community has helped move the dreaded “management by metrics” away from a culture of fear and blame. Depending on which attribution you believe, it was either Albert Einstein or William Bruce Cameron, an American professor of sociology, who ﬁrst observed: “Not everything that can be counted counts, and not everything that counts can be counted.” The remark, originally made more than half a century ago, has come to encapsulate much of the scepticism that dogs the rush to “turn data into decisions”. With metrics and performance indicators seemingly aﬀorded a role in almost every facet of working life, critics are nowadays quick to warn that when we measure something too much we might just end up changing the very thing we are measuring.

They do have a point. There are undoubtedly many things that really cannot be measured. Yet the fact remains that it is hard to bring about improvement without a meaningful basis for comparison. Perhaps the single most serious failing of many performance targets is that they are imposed from the top down. The “unforeseen” eﬀects of such measures are in large part the inevitable consequences of a culture that too frequently compels staﬀ to prioritise an imperfect goal over service to the public. Genuinely eﬀective performance management demands collaboration. It should involve frontline staﬀ, end users and other stakeholders in establishing metrics that are truly constructive. It should take into account outcomes that matter to a variety of interested parties, and it should gauge them accordingly. These and other habitually overlooked concerns were to the fore when Max Moullin, a longtime member of the operational research community, created

IMPACT © THE OR SOCIETY 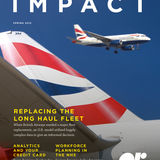