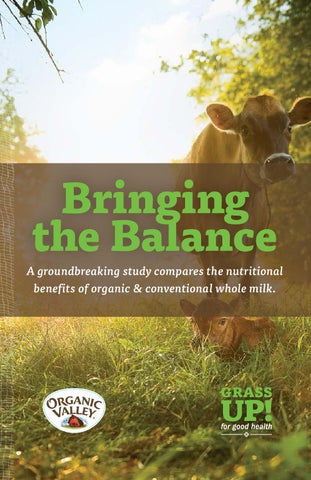 THE STUDY BY WASHINGTON STATE UNIVERSITY

Over the course of 18 months (2011-2012), 384 whole fat milk samples from 14 commercial milk processors in seven regions of the United States were analyzed by an independent, accredited laboratory to compare the milk-fat composition of organic whole milk from Organic Valley dairy farms with conventionally produced whole milk. This is, to date, the largest and most comprehensive U.S. study of milkâ&amp;#x20AC;&amp;#x2122;s essential fatty acid composition.

Scientists agree, lots of Americaâ&amp;#x20AC;&amp;#x2122;s health problems are the direct result of our modern diet: too much omega-6 fatty acids, and not enough omega-3 fatty acids. The ideal, healthful balance is a 2.3 to 1 ratio of omega-6 to omega-3. A change in diet to more organic whole milk and less omega-6 vegetable oil gets us 80% of the way to an ideal omega-6/omega-3 balance. Better balance = Better health!

Americans consume too much food high in omega-6 fatty acids (eg, vegetable oils) and too little food high in omega-3 fatty acids (eg, oily fish, beans, fruits, and vegetables). While both omega-6 and omega-3 fatty acids are essential for good health, poor dietary options have skewed the ratio of omega-6 to omega-3 from a desirable 2.3 to 1 to as high as 20 to 1. This unbalanced ratio is associated with a wide array of health problems, including cardiovascular disease, obesity, cancer, diabetes, neurological and immune system disorders, and visual impairment.

The CLA isomer most prevalent in dairy products has potential anti-carcinogenic benefits, particularly for breast cancer. Research suggests other CLA isomers in dairy products may protect the heart, prevent thickening of arteries, prevent cancer, and help regulate the immune system. These powerful nutrients (Omega-3 &amp; CLA), as part of a balanced diet, can greatly reduce the occurrence of many modern diseases caused by the imbalanced, modern American diet.

Whole milk won’t make you fat! In fact, several recent studies suggest that drinking whole milk as part of a balanced diet can actually help fight obesity — quite the opposite of contributing to weight gain. These studies are now causing many nutrition experts to rethink the role of whole milk in a healthy diet. For example: • A study published in The Archives of Disease in Childhood in March 2013 found that children who drank whole or 2% milk

were less likely to be overweight than children who drank skim or 1%. • Another study, published in the American Journal of Clinical Nutrition in 2006, followed 20,000 women over a 9-year period and found a positive link between dairy fat consumption and

diminished weight gain. Given the growing evidence on the health benefits of whole milk, the USDA Dietary Guidelines Advisory Committee needs to reconsider the guideline for milk consumption for the 2015 Dietary Guidelines for Americans.

Farm BETTER HEALTH for everyone The evidence continues to grow. Organic soil and pasture health leads to many nutritional benefits. Itâ&amp;#x20AC;&amp;#x2122;s a simple truth that all farmers can pursue, and everyone will reap the delicious, nutritional rewards.

ming To learn more and to read the study visit www.organicvalley.coop/grassup @grassupforgood 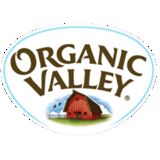