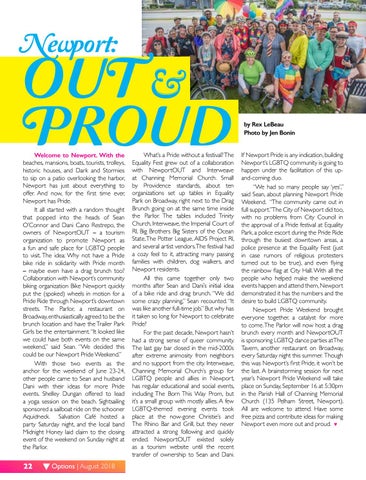 OUT Š PñOUã Welcome to Newport. With the beaches, mansions, boats, tourists, trolleys, historic houses, and Dark and Stormies to sip on a patio overlooking the harbor, Newport has just about everything to offer. And now, for the first time ever, Newport has Pride. It all started with a random thought that popped into the heads of Sean O’Connor and Dani Cano Restrepo, the owners of NewportOUT – a tourism organization to promote Newport as a fun and safe place for LGBTQ people to visit. The idea: Why not have a Pride bike ride in solidarity with Pride month – maybe even have a drag brunch too? Collaboration with Newport’s community biking organization Bike Newport quickly put the (spoked) wheels in motion for a Pride Ride through Newport’s downtown streets. The Parlor, a restaurant on Broadway, enthusiastically agreed to be the brunch location and have the Trailer Park Girls be the entertainment. “It looked like we could have both events on the same weekend,” said Sean. “We decided this could be our Newport Pride Weekend.” With those two events as the anchor for the weekend of June 23-24, other people came to Sean and husband Dani with their ideas for more Pride events. Shelley Dungan offered to lead a yoga session on the beach. Sightsailing sponsored a sailboat ride on the schooner Aquidneck. Salvation Café hosted a party Saturday night, and the local band Midnight Honey laid claim to the closing event of the weekend on Sunday night at the Parlor.

What’s a Pride without a festival? The Equality Fest grew out of a collaboration with NewportOUT and Interweave at Channing Memorial Church. Small by Providence standards, about ten organizations set up tables in Equality Park on Broadway, right next to the Drag Brunch going on at the same time inside the Parlor. The tables included Trinity Church, Interweave, the Imperial Court of RI, Big Brothers Big Sisters of the Ocean State, The Potter League, AIDS Project RI, and several artist vendors. The festival had a cozy feel to it, attracting many passing families with children, dog walkers, and Newport residents. All this came together only two months after Sean and Dani’s initial idea of a bike ride and drag brunch. “We did some crazy planning,” Sean recounted. “It was like another full-time job.” But why has it taken so long for Newport to celebrate Pride? For the past decade, Newport hasn’t had a strong sense of queer community. The last gay bar closed in the mid-2000s after extreme animosity from neighbors and no support from the city. Interweave, Channing Memorial Church’s group for LGBTQ people and allies in Newport, has regular educational and social events, including The Born This Way Prom, but it’s a small group with mostly allies. A few LGBTQ-themed evening events took place at the now-gone Christie’s and The Rhino Bar and Grill, but they never attracted a strong following and quickly ended. NewportOUT existed solely as a tourism website until the recent transfer of ownership to Sean and Dani.

by Rex LeBeau Photo by Jen Bonin If Newport Pride is any indication, building Newport’s LGBTQ community is going to happen under the facilitation of this upand-coming duo. “We had so many people say ‘yes’,” said Sean, about planning Newport Pride Weekend. “The community came out in full support.”The City of Newport did too, with no problems from City Council in the approval of a Pride festival at Equality Park, a police escort during the Pride Ride through the busiest downtown areas, a police presence at the Equality Fest (just in case rumors of religious protesters turned out to be true), and even flying the rainbow flag at City Hall. With all the people who helped make the weekend events happen and attend them, Newport demonstrated it has the numbers and the desire to build LGBTQ community. Newport Pride Weekend brought everyone together, a catalyst for more to come. The Parlor will now host a drag brunch every month and NewportOUT is sponsoring LGBTQ dance parties at The Tavern, another restaurant on Broadway, every Saturday night this summer. Though this was Newport’s first Pride, it won’t be the last. A brainstorming session for next year’s Newport Pride Weekend will take place on Sunday, September 16 at 5:30pm in the Parish Hall of Channing Memorial Church (135 Pelham Street, Newport). All are welcome to attend. Have some free pizza and contribute ideas for making Newport even more out and proud.