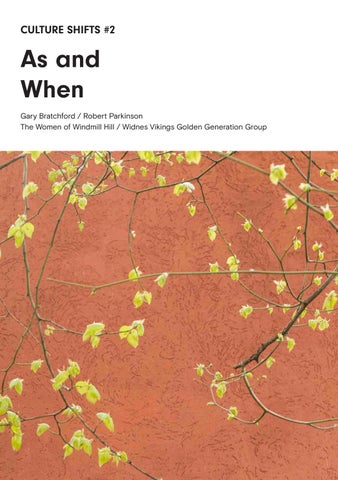 Welcome to the Culture Shifts brochure series Culture Shifts is a socially engaged photography programme, working with 11 national and international photographers embedded in communities across 7 areas of Liverpool City Region. The project seeks to support communities to explore their stories in a way that is meaningful to them.

graphic image, and look at the various strands of collaborative practice each photographer and the medium itself can bring to the work. What happens when we move away from the voice of a single image-maker to that of the collective voice, co-creating, co-narrating and co-curating their own photo story?

Collaborating with photographers, communities have co-authored a series of photo stories: sequences of images that reflect on their identity, interests and lives. Collectively we hope these photo stories will inspire, surprise or challenge people, through exhibitions, an open online platform (www.photostories.org.uk) and within each of our specially designed Culture Shifts brochures.

Through Culture Shifts, photographers and communities have come together to curate their own messages and broadcast them in a way that is inclusive, collaborative and representative. This is the foundation of socially engaged photography. We are delighted to share both the outcomes and the process of each photographer and community.

Together, as communities, commissioners and photographers, we aim to explore the role of photography as a tool for expression and a platform to challenge stereotypes of localised identities. Each community collaborated with a different photographer, and although throughout the course of the programme some themes emerged time and time again, each project was distinct in its approach to working and in the final work created.

Culture Shifts has only been made possible through the collaborative approach to partnership commissioning and delivery and we would like to take this opportunity to thank all of the local authority venues, cultural, community and health sector partners across the region who made the project a reality. We would also like to take this opportunity to thank our core funders for the programme, Arts Council England, for our strategic touring funding support.

Culture Shifts aimed to challenge questions around authorship in the photo-

As and When reflects on the ideas and identities of two distinct groups of Halton residents, looking at how we build a sense of community, how we sustain a sense of belonging and what we mean by health and wellbeing. The photographs on show look at the lives of two community groups, the Women of Windmill Hill and Widnes Vikings Golden Generation group. Photographers Gary Bratchford and Robert Parkinson worked with each group to show how two communities living either side of the iconic Runcorn Bridge are brought together through shared perspectives on social mobility, local visibility, health and well-being.

The Women of Windmill Hill The Women of Windmill Hill, a group based in the Runcorn estate, began their project by actively reconnecting with their area and its history. Along the way, they decided to base the style of their work on a 1970s promotional article about moving to the area, at a time when families were often dispersed to the “suburbs” and away from the Liverpool slums. The final work compares promised perceptions of Windmill Hill in the 1970s’ with the reality of today.

â&#x20AC;&#x153;The World Health Organisation in 1948, the same year as the birth of the NHS, defined health as a state of complete physical, mental, and social well-being and not merely the absence of disease or infirmity.â&#x20AC;? Dr Cliff Richards M.B.E Social Prescribing Lead for Cheshire and Merseyside

Widnes Vikings Golden Generation Group To explore the lives of Widnes Vikings Golden Generation Group, a social group for fans of the Super League club aged over 55, the community were each given a disposable camera and asked to document what they do on match day before arriving at the stadium. Through this process, the group collectively captured over 450 photographs. These images reveal the true extent of their social mobility and daily interactions, further highlighting their common aim of breaking down stereotypes that being older means being inactive.

We would like to thank group member Mike Flynn for his black and white photographs capturing the team over the years.

Some of the ideas behind As and When are based on the World Health Organisation’s 1948 definition of ‘health’ as ‘a state of complete physical, mental, and social well-being and not merely the absence of disease or infirmity’. Ultimately, the project looks at how a sense of belonging is a crucial foundation to healthy, happy people, and uses photography as a way to investigate and encapsulate the daily habits and rituals that form this feeling.

than complete health. Ultimately it is the resilience of individuals and communities that create health. Culture Shifts aims to throw light on this genesis.” Dave Sweeney, Chief Officer of NHS Halton CCG

“4 billion photographs per day are uploaded onto social media. Photography is now as important as text or verbal communication in the stories we tell about our lives.” Sarah Fisher, Executive Director, Open Eye Gallery

Culture Shifts doesn’t end here. Contributing to the project is open to all through PhotoStories, our new online showcasing platform: photostories.org.uk. Photostories showcases the result of our Culture Shifts collaborative photography projects, but the platform is also open to anyone. There are resources on the site to help you think about the way you capture, select and curate your own digital exhibition of images. Everyone is invited to upload photo stories - sequences of photos - that reflect on the people, places and communities that make up your experience of the world. More and more, we are using photography to communicate to each other. But just like verbal or written language, we must use photography to communicate responsibly and effectively. To join in, get a free PhotoStories account. photostories.org.uk 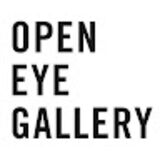