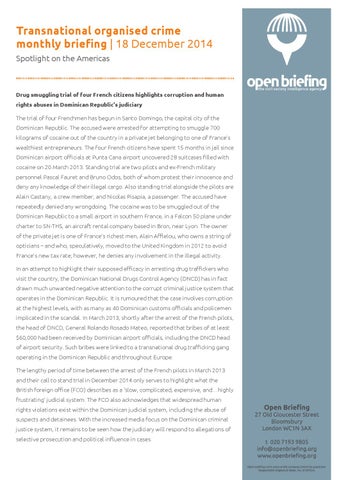 Drug smuggling trial of four French citizens highlights corruption and human rights abuses in Dominican Republic’s judiciary The trial of four Frenchmen has begun in Santo Domingo, the capital city of the Dominican Republic. The accused were arrested for attempting to smuggle 700 kilograms of cocaine out of the country in a private jet belonging to one of France’s wealthiest entrepreneurs. The four French citizens have spent 15 months in jail since Dominican airport officials at Punta Cana airport uncovered 28 suitcases filled with cocaine on 20 March 2013. Standing trial are two pilots and ex-French military personnel Pascal Fauret and Bruno Odos, both of whom protest their innocence and deny any knowledge of their illegal cargo. Also standing trial alongside the pilots are Alain Castany, a crew member, and Nicolas Pisapia, a passenger. The accused have repeatedly denied any wrongdoing. The cocaine was to be smuggled out of the Dominican Republic to a small airport in southern France, in a Falcon 50 plane under charter to SN-THS, an aircraft rental company based in Bron, near Lyon. The owner of the private jet is one of France’s richest men, Alain Afflelou, who owns a string of opticians – and who, speculatively, moved to the United Kingdom in 2012 to avoid France’s new tax rate; however, he denies any involvement in the illegal activity. In an attempt to highlight their supposed efficacy in arresting drug traffickers who visit the country, the Dominican National Drugs Control Agency (DNCD) has in fact drawn much unwanted negative attention to the corrupt criminal justice system that operates in the Dominican Republic. It is rumoured that the case involves corruption at the highest levels, with as many as 40 Dominican customs officials and policemen implicated in the scandal. In March 2013, shortly after the arrest of the French pilots, the head of DNCD, General Rolando Rosado Mateo, reported that bribes of at least $60,000 had been received by Dominican airport officials, including the DNCD head of airport security. Such bribes were linked to a transnational drug trafficking gang operating in the Dominican Republic and throughout Europe. The lengthy period of time between the arrest of the French pilots in March 2013 and their call to stand trial in December 2014 only serves to highlight what the British foreign office (FCO) describes as a ‘slow, complicated, expensive, and…highly frustrating’ judicial system. The FCO also acknowledges that widespread human rights violations exist within the Dominican judicial system, including the abuse of suspects and detainees. With the increased media focus on the Dominican criminal justice system, it remains to be seen how the judiciary will respond to allegations of selective prosecution and political influence in cases. Open Briefing | 1

Other developments The UN high commissioner for refugees, António Guterres, opened a two day ministerial meeting in Brazil on 2 December with the aim of formulating a 10-year plan of action to strengthen the protection of asylum seekers, migrants, refugees and stateless persons in Latin America. Importantly, the new declaration will focus on the protection of those fleeing from transnational crime. With an estimated 800,000 people seeking refugee protection in Latin America, the high-level meeting will address the problems encountered by unaccompanied minors who are escaping all forms of organised crime, including drug trafficking. The abduction on 26 September of 43 trainee teachers from the town of Iguala, Mexico, has sparked protests in Guerrero state and Mexico City, against widespread violence, crime and Mexico’s corrupt political system. It is believed that the disappearance of the students was engineered by Iguala&#39;s mayor, José Luis Abarca Velázquez, and his wife, María de los Ángeles Pineda Villa, and enacted by corrupt local police officers in tandem with the Guerreros Unidos drugs cartel. Javier Hernández, the Mexican representative of the UN high commissioner for human rights, has called for the protection of the protesters and parents of the missing students. US strategy to combat transnational organised crime is deeply flawed according to an article in the 1

International Affairs Review journal from George Washington University. The author, John Driscoll, concludes that the United States’ current strategy to combat transnational organised crime and its war on drugs are deeply flawed and in need of revision. Driscoll criticises US policy on combating organised crime – particularly drug trafficking – and highlights the urgent need for the United States to shift away from a militarised and law enforcement approach towards a demand reduction policy. The use of proper metrics to measure the progress of new policies and international and multilateral initiatives are advocated if the United States is to keep one step ahead of transnational organised crime. Also of note •

On 10 December, the World Health Organization, the UN Development Programme and the UN Office on Drugs and Crime jointly published the Global status report on violence 2

prevention 2014. The report highlights the need for more decisive action by countries to prevent violence. •

The US embassy in Nassau, Bahamas, has issued a warning that violent crime is on the increase in areas where US expatriates reside.

Two Jersey men are due to stand trial in Martinique following the seizure of cocaine estimated to be worth £40 million from a British-registered yacht.

On 5 December, thousands of protestors marched through the Haitian capital, Port-AuPrince, in demonstration against corrupt government practices. Many demonstrators called for the resignations of the President Michel Martelly and Prime Minister Laurent Lamothe.

Professor Ronald Weitzer at George Washington University has identified a new method of research for investigating human trafficking. Weitzer prescribes that micro level research is necessary to counteract the US state department’s ‘dubious’ anti-trafficking legislation, which ranks countries according to how effective they are at fighting trafficking.