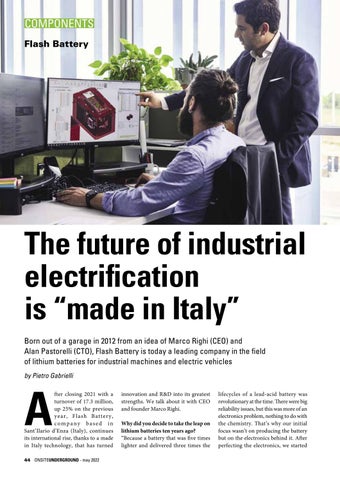 The future of industrial electrification is “made in Italy” Born out of a garage in 2012 from an idea of Marco Righi (CEO) and Alan Pastorelli (CTO), Flash Battery is today a leading company in the field of lithium batteries for industrial machines and electric vehicles by Pietro Gabrielli

fter closing 2021 with a turnover of 17.3 million, up 25% on the previous year, Flash Battery, company based in Sant’Ilario d’Enza (Italy), continues its international rise, thanks to a made in Italy technology, that has turned

innovation and R&amp;D into its greatest strengths. We talk about it with CEO and founder Marco Righi. Why did you decide to take the leap on lithium batteries ten years ago? “Because a battery that was five times lighter and delivered three times the

lifecycles of a lead-acid battery was revolutionary at the time. There were big reliability issues, but this was more of an electronics problem, nothing to do with the chemistry. That’s why our initial focus wasn’t on producing the battery but on the electronics behind it. After perfecting the electronics, we started