Lennox Cato - It's all in the detail 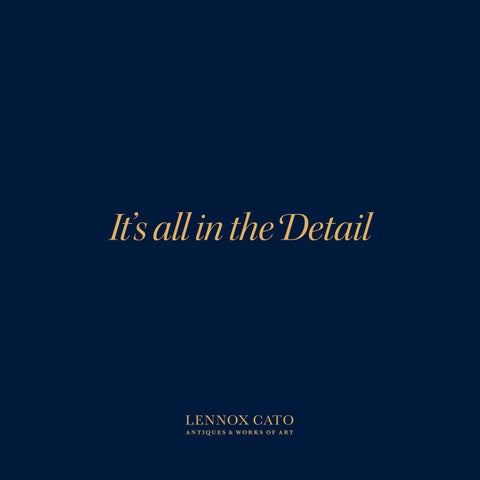 LENNOX CATO A NTIQUES &amp; WOR KS OF A RT

cannot believe that another year has passed since my last publication. This is something I really enjoy creating and allows me to reflect on the kind of stock I carry, and how I can continue to improve my knowledge and expertise. ◆ This year is an extremely exciting one within the world of antiques as it is full of celebrations. Most notably the tercentenary of Thomas Chippendale. We also celebrate the famous royal carver of the late 17th century, Grinling Gibbons, who was born 370 years ago. And last but by no means least the British Antiques Dealers Association celebrates 100 years since its inception. ◆ My interest lies with Chippendale and so my main exhibition this year is based on the incredible life of this man. One of the most entrepreneurial men of all time, but particularly the 18th century. The detail in his design and his creativity have left such a legacy to us all and I hope I will be able to do him justice with the selection of items I will be displaying in his honour. ◆ As well as celebrating this iconic character I will be exhibiting a fine selection of furniture and works of art, many of which are featured in the pages before you. With my very best wishes,

Georgian chairs A set of six George II period mahogany high back dining chairs, each having drop-in-seats below a vase shaped back splat. The front cabriole legs are raised on pad feet with C-scroll motif to the knees. English circa 1705 Back height 99cm, Seat width 53cm, Seat depth 37cm Ref 802842

18th century A rare Georgian mahogany tripod base shaving stand. Raised on three pointed pad feet, baluster shaped column. Having a fold down section which holds the shaving bowl and another section for the razors. Above is the rectangular mirror frame, which possibly has the original plate. All is supported on a turned mahogany pole for the mirror etc. to be adjusted. English circa 1740 Height 146cm, Base 59cm sq Ref 8034100

Gilt-wood table Made in the rococo manner, this fine mid-18th century console table is carved from lime wood. It is most unusual to find a period console table on four legs having no need to be secured against a wall. The marble top has old repairs but perfectly acceptable in today’s market. Possibly European Circa 1760 Height 81.5cm, Width 94cm, Depth 56cm Ref 800712

The Horticulturalist Early 18th century French Aubusson tapestry woven with wools and silk. This is a fascinating subject; the landowner with slave-girl. He is demonstrating to her how to graft cuttings onto the growing plant. This takes place in a rich landscape of flora and fauna. The man with his long beard, wearing his hat and bright red jacket is adorned with his garden implements as he holds a cutting blade instrument in his right hand. The slave girl looks on intensely, pointing at the cutting and holding a basket full of cuttings that she will attempt to graft. In the background are mountains. The whole message being portrayed is sustainability. This makes the whole more interesting. Is it a Caribbean view which is possibly one of the French islands such as Martinique, French Guiana or Saint Martin? Framed in a boarder having minor old repairs. It may have been slightly reduced in height and has been re-backed with a silk type fabric ready to be hung. French Circa 1720 Height 244cm, Width 244cm (8ft square) Ref 80137

t’s all in the detail’ is very much one of my mantra’s! Design and proportions are paramount when choosing pieces for your home and collections. The work of Thomas Chippendale captures this very essence with very often the element of surprise as you examine a piece of his work. Maybe an extra piece of carving to the foot, or the back of a chair scrolling round to infinity. It is the finish that makes his work, whether by him or a contemporary using his style, so distinctive and pleasing to the eye. ◆ Within my exhibition I have managed to source pieces that are all of the 18th century period; unfortunately, I cannot say they were made by the master himself. This would be totally misleading as he only made so very few pieces. But leading cabinetmakers did so, taking his original designs and executing the work in their way. ◆ Chippendale became famous because of the publication of ‘The Gentleman and Cabinet-Maker’s Director’ which was published in 1754. The book was aimed at both buyers and makers of fine furniture, to guide and choose different designs of the day. This contemporary manifesto of Rococo taste, which could be achieved by the finest cabinet-makers working in Gothic, Chinese or Modern styles of the day.

He explains he could furnish and equip a whole house, from the servant’s rooms in the attics to family apartments and grand state rooms. He even provided an undertaking service. His designs and ideas were portrayed in this publication. It was for everyone who wished to subscribe, his list was made up of nobility, professional men, academics and booksellers. A large number of his subscribers were based outside London in smaller cities and provincial towns around the country. ◆ In and around the mid-18th century (1755) the publication was in English North American colonies. The American’s then adopted the influence showing the Rococo style which was very obviously English. Having recognised the importance of the European markets, Chippendale produced a French version of the Director in 1762. Copies were acquired by Catherine the Great of Russia. In Europe fine English furniture was the must have, this was particularly apparent in the upper echelon of society in such places as Germany, Scandinavia, Spain, Portugal and Russia. You can often see furniture derived from English models in all these places relating to Chippendale’s designs.

Chippendale tripod base table This important table was exhibited at the fifth Antiques Dealers Fair in 1938 at Grosvenor House, Park Lane, London W1. A very fine example of 18th century craftsmanship attributed to Thomas Chippendale. Made of solid mahogany and having a one piece carved edge tilt top, raised on a tripod base terminating on to lion paw feet. Between the three legs is the patriotic symbol of a lion mask, attaining to King George III, representing strength and courage. English Circa 1755 Private collection

Hanging shelves The influence from the orient was very fashionable in the 18th century and this was incorporated into many of Chippendales designs. The fret-work design or cock-pen design, as it is sometimes referred, on these hanging book shelves is typical of his style. They are made of a rare wood, Padouk-wood’, which came from China. It is unusual to find an item such as this in this timber, as most shelves like these are made of mahogany. English circa 1770 Height 87.4cm, Width 63.5cm, Depth 17.5cm Ref 7981225

Chest with slide Classic Chippendale period mahogany chest of drawers of small size with brushing slide and blind-fretwork canted corners in the Chinese design. Rococo gilt-metal handles with cast pineapple in the centre (friendship/hospitality). Raised on bracket feet. The back of this commode chest of drawers is beautifully panelled in a secondary timber, it’s all about the detail. English circa 1760 Height 80cm, Width 99cm, Depth 54.5cm Ref 715380

Pair of wall mirrors Outstanding pair of oval framed gilt wood mirrors in the Rococo design. This pair of mirrors could have possibly been made in the workshops of William &amp; John Linnell. Most of the leading and recognized workshops used ‘The Gentleman and Cabinet-Maker’s Director’ for their designs. English circa 1780 Height 139cm, Width 73.5cm Ref 0121811

Lennox Cato - It's all in the detail