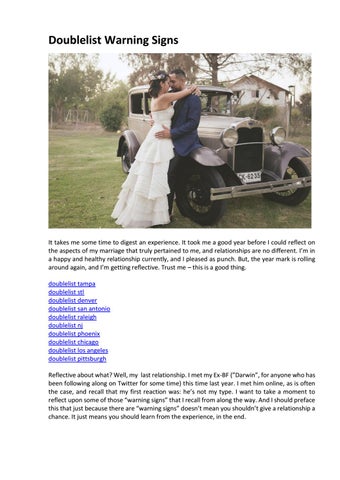 It takes me some time to digest an experience. It took me a good year before I could reflect on the aspects of my marriage that truly pertained to me, and relationships are no different. I’m in a happy and healthy relationship currently, and I pleased as punch. But, the year mark is rolling around again, and I’m getting reflective. Trust me – this is a good thing. doublelist tampa doublelist stl doublelist denver doublelist san antonio doublelist raleigh doublelist nj doublelist phoenix doublelist chicago doublelist los angeles doublelist pittsburgh Reflective about what? Well, my last relationship. I met my Ex-BF (”Darwin”, for anyone who has been following along on Twitter for some time) this time last year. I met him online, as is often the case, and recall that my first reaction was: he’s not my type. I want to take a moment to reflect upon some of those “warning signs” that I recall from along the way. And I should preface this that just because there are “warning signs” doesn’t mean you shouldn’t give a relationship a chance. It just means you should learn from the experience, in the end.

To start with, Darwin was incredibly affectionate right away. This is generally an instant turn-off to me just by nature of my personality. I believe affection should be earned, and not given just by virtue of your existence on this planet, so I’m always a tad weary. This was Warning Sign #1. Next, there was how Darwin spoke of his Ex Wife. Now, I know – Ex’es aren’t exactly going to win any prizes for “Most Liked”, but in general, he never stated what it was that was “wrong” about her. Just that she was a miserable person (and, she probably was). Now granted, he didn’t have to share his thoughts and feelings on his Ex with me, but he didn’t wish her well. He really, really didn’t wish her well. And that, to me, was pretty alarming. Thereby, making this Warning Sign #2. Third was the way he conducted his personal relationships. Darwin didn’t have any friends, didn’t want any friends, and in general, couldn’t seem to find the value of people in his life. There seemed to be a real emotional barrier there. What made this weird is that there were some people in his life who cared for him very deeply – I met them. I saw this. And yet, he refused to accept these individuals as anything more than “acquaintances”. This concerned me because how you treat others in your life is pretty representative of how you might be treated. And when I got caught up in the emotional off switch, I couldn’t have been more right … Lastly, Warning Sign #4 was – when Darwin was done, he was done. Believe it or not – it wasn’t a bad relationship. Truthfully? It was a great relationship. I had a lot of fun, I blossumed emotionally, the sex was amazing. But he took that all away from me in an instant but telling me within a day or two of the break-up that I, essentially, meant nothing. Honest? Sure. Necessary? I’m not so sure. I could have looked back at this relationship as a defining transitional moment in my single life. Instead, I’ll always view him as an emotional imposter that made me weary and distrustful for a long time. So, like I said: not to say that “Warning Signs” mean a No-Go, but they need to be recognized and reflected upon. I knew about each one of these (well, except the last one) as the relationship was going on, and it gave me that uneasy feeling along the way. As I look back now, I can see why I would be cautious of these again. What are your warning signs? 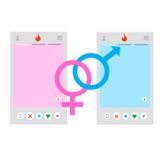