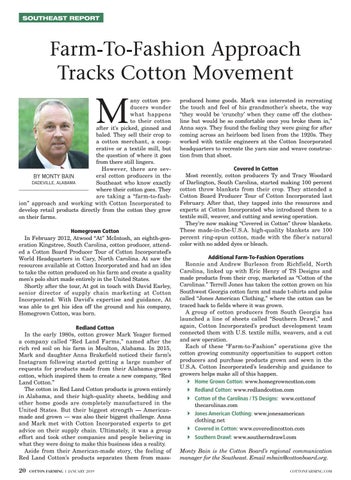 any cotton producers wonder what happens to their cotton after it’s picked, ginned and baled. They sell their crop to a cotton merchant, a cooperative or a textile mill, but the question of where it goes from there still lingers. However, there are several cotton producers in the BY MONTY BAIN DADEVILLE, ALABAMA Southeast who know exactly where their cotton goes. They are taking a “farm-to-fashion” approach and working with Cotton Incorporated to develop retail products directly from the cotton they grow on their farms. Homegrown Cotton In February 2012, Atwood “At” McIntosh, an eighth-generation Kingstree, South Carolina, cotton producer, attended a Cotton Board Producer Tour of Cotton Incorporated’s World Headquarters in Cary, North Carolina. At saw the resources available at Cotton Incorporated and had an idea to take the cotton produced on his farm and create a quality men’s polo shirt made entirely in the United States. Shortly after the tour, At got in touch with David Earley, senior director of supply chain marketing at Cotton Incorporated. With David’s expertise and guidance, At was able to get his idea off the ground and his company, Homegrown Cotton, was born. Redland Cotton In the early 1980s, cotton grower Mark Yeager formed a company called “Red Land Farms,” named after the rich red soil on his farm in Moulton, Alabama. In 2015, Mark and daughter Anna Brakefield noticed their farm’s Instagram following started getting a large number of requests for products made from their Alabama-grown cotton, which inspired them to create a new company, “Red Land Cotton.” The cotton in Red Land Cotton products is grown entirely in Alabama, and their high-quality sheets, bedding and other home goods are completely manufactured in the United States. But their biggest strength — Americanmade and grown — was also their biggest challenge. Anna and Mark met with Cotton Incorporated experts to get advice on their supply chain. Ultimately, it was a group effort and took other companies and people believing in what they were doing to make this business idea a reality. Aside from their American-made story, the feeling of Red Land Cotton’s products separates them from mass-

produced home goods. Mark was interested in recreating the touch and feel of his grandmother’s sheets, the way “they would be ‘crunchy’ when they came off the clothesline but would be so comfortable once you broke them in,” Anna says. They found the feeling they were going for after coming across an heirloom bed linen from the 1920s. They worked with textile engineers at the Cotton Incorporated headquarters to recreate the yarn size and weave construction from that sheet. Covered In Cotton Most recently, cotton producers Ty and Tracy Woodard of Darlington, South Carolina, started making 100 percent cotton throw blankets from their crop. They attended a Cotton Board Producer Tour of Cotton Incorporated last February. After that, they tapped into the resources and experts at Cotton Incorporated who introduced them to a textile mill, weaver, and cutting and sewing operation. They’re now making “Covered in Cotton” throw blankets. These made-in-the-U.S.A. high-quality blankets are 100 percent ring-spun cotton, made with the fiber&#39;s natural color with no added dyes or bleach. Additional Farm-To-Fashion Operations Ronnie and Andrew Burleson from Richfield, North Carolina, linked up with Eric Henry of TS Designs and made products from their crop, marketed as “Cotton of the Carolinas.” Terrell Jones has taken the cotton grown on his Southwest Georgia cotton farm and made t-shirts and polos called “Jones American Clothing,” where the cotton can be traced back to fields where it was grown. A group of cotton producers from South Georgia has launched a line of sheets called “Southern Drawl,” and again, Cotton Incorporated’s product development team connected them with U.S. textile mills, weavers, and a cut and sew operation. Each of these “Farm-to-Fashion” operations give the cotton growing community opportunities to support cotton producers and purchase products grown and sewn in the U.S.A. Cotton Incorporated’s leadership and guidance to growers helps make all of this happen. } Home Grown Cotton: www.homegrowncotton.com } Redland Cotton: www.redlandcotton.com } Cotton of the Carolinas / TS Designs: www.cottonof thecarolinas.com } Jones American Clothing: www.jonesamerican clothing.net } Covered in Cotton: www.coveredincotton.com } Southern Drawl: www.southerndrawl.com Monty Bain is the Cotton Board’s regional communication manager for the Southeast. Email mbain@cottonboard.org. COTTONFARMING.COM More from One Grower Publishing