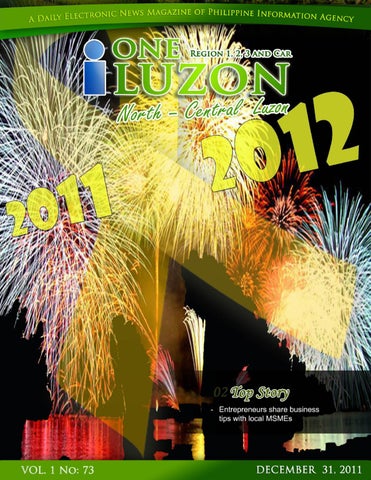 A GLIMPSE OF 2011 The 2011 year in review is a snapshot of what the Filipino nation had experienced over the 12 months or the 365 days of struggle as a nation. Among the incidents that brought sad news was when Japan was struck by a massive earthquake which brought the country down to its knees. The quake killed thousands of people after a tsunami struck the island nation and rendered some of its people homeless. The threat of a nuclear fallout due to the damaged nuclear reactor further escalated problems in the much-battered country. These experiences have left fear among the Filipinos. Conventional package of disasters were likewise experienced by the country with typhoons “Juaning”, “Pedring”, and “Sendong” leaving thousands of people dead, loss of properties and livelihood among the people, and slight economic downfall, plagued by political bickering and intramurals of the three (3) branches of government. National leadership&#39;s call for a forward direction to progress had certainly resulted to a slow pace. However, the government pursued with its vision to uplift the lives of Filipinos given the varied social programs of the different government agencies as well as the active support and actions of the local government units. These paid for us to move towards true development.

In a nutshell, 2011 was full of surprises -- some happy ones like the country&#39;s unrelenting quest to win the Miss Universe crown with Shamcey Supsup bagging third-runner up. But there were unhappy ones too that resulted to severe sacrifices among the people. Today, even as the country faces a serious effort to regain its strength for 2012, a room to unify major and allied economic and political forces can contain a priority leaving all other contrasting views which could disturb noble intensions for good. Juan de la Cruz is all waiting for change - a transition initiative for government to display a genuine and doable foundation for the nation&#39;s march on P-Noy&#39;s popularly-laid down vision “matuwid na daan”. Having declared as Malacanang&#39;s battlecry, the people remains&#39; dismayed over the obvious aggrandizement of extreme forces that threatens redemption of the brighter days ahead. This we cannot afford!!! Leave no selfish – vested interests and prospects for good governance to attain a just, humane and well-defined national direction and must have to come on the blueprint to established goals and honest purpose. As one Philippine president puts it - “…what we are called upon to do is to put a fine stone to that edifice that will go for a strong and Frank Cimatu, PDI - North Luzon Bureau enduring republic.” Jennilyne C. Role – PIA Region 1

Ilocos Norte&#39;s Christmas Caravan under the province&#39;s Millenium Development Goals held in Laoag City and the towns of Piddig, Pagudpud, Pasuquin, and Burgos

DSWDs &#39;Big Ticket&#39;: Two-day periodic assessment meeting with provincial, municipal and city welfare and development offices, municipal accountants and state auditors to address issues and concerns on the implementation, disbursement and liquidation of funds transfer in the different municipalities conducted by the DSWD field office 2 at Tuguegarao City

Year end Conference and Christmas Party of the Association of Government Information Officers of Central Luzon (AGIO-CL), Inc. at the Department of Health-Center for Health Development-3, Maimpis, City of San Fernando

E-NewsMagazine about Northern and Central Luzon