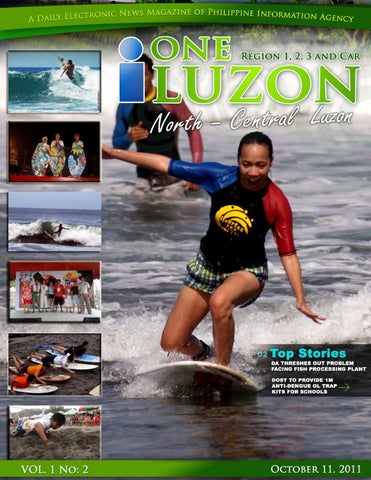 The destroyed bridge at Barangay Tungod, Lagawe. To the right is the temporary Bailey bridge being constructed

A new police strategy to minimize incidents of crime in Ilocos Region implemented in December last year has paid off following the decline of crime volume from the months of January and February this year.

Reporting the peace and order situation in region I during the Regional Peace and Order Council I (RPOC-I) meeting held recently in Baluarte, Vigan City, Police Regional Office I (PRO-I) director PCSupt. Franklin Jesus B. Bucayu said the total crime volume in Region I was recorded at 1,935 from January to February 2011 this year compared to 2,779 crime incidents for the same period last year, a decrease of 844 incidents or 30.37 percent decline. Of the 1,935 incidents, 1,389 were recorded in Pangasinan followed by La Union with 335; Ilocos, 129; and Ilocos Norte, 82, Bucayu added.

AMCR and CSE. PRO1&#39;s average monthly crime rate for January to February 2011 was 19.14 percent from 27.4 percent of the same period in 2010 or a significant decrease of 8 percent. On its crime solution efficiency, the police office improved its performance by 12 percent from 19 percent last year to 31 percent this year. Shooting Incidents. While other areas of police concern registered significant performance, shooting incidents increased from 71 cases last year to 83 cases this year. Of the 71 cases, 17 were perpetrated by motorcycle riding-intandem criminals while in the 83 cases, 21 were also committed by riding-in-tandem assassins. Internal Security Threat. Ilocos region remains under the Ilocos/Cordillera regional Committee of the New People&#39;s Army headed by Esteban Manuel a.k.a. Bonnie. From the original two guerilla fronts operating in the region n 2006, only one platoon-size was left and operating in the Second District of Ilocos Sur.

The provinces of La Union and Pangasinan have been declared â&amp;#x20AC;&amp;#x153;insurgency-free areasâ&amp;#x20AC;? with the signing of memorandum of agreement for a joint Declaration of Insurgency-Cleared Area and for Strengthening the Internal

Security Operation between the AFP, PNP and the governors of the two provinces. As of date, there is no insurgency-affected barangay in the region but 145 barangays remain under threat of being influenced by insurgents. These barangays are in Ilocos Sur (81), Pangasinan (36), Ilocos Norte (27) and La Union (1).

Lately, the AFP and the PNP signed an agreement to ensure unity of efforts in addressing all peace and security concerns in the region. Bucayu, who also chairs RPOC-1, said that while there are other factors to consider, the successful implementation of the Police Integrated Patrol System or PIPS as a new strategy in crime prevention appeared to be the biggest contributor in the decline of crime incidents in Region 1.

What is PIPS?. PIPS or Police Integrated Patrol System is a renewed strategy involving several crime prevention initiatives aimed at minimizing the incidence of crime. It harmonizes and integrates existing programs on anticriminality and police security operations. It enhances crime prevention and solution to address the problem on motorcycle riding criminals, street crimes, crime incidents with the use of firearms, carnapping kidnapping and other crimes.

PIPS Operation. The system is implemented though the conduct of high police visibility by way of foot and mobile patrols; deployment of motorcycle anti-street crimes operations to run after riding-in-tandem criminals; setting up of checkpoints and chokepoints; implementing Oplan Bakal/Sita; saturation of known places and hideouts of criminals; and the implementation of the search warrants. Effects of PIPS. The effectiveness of this enhanced anti-crime strategy was evinced by the significant decline of the crime volume recorded since its implementation in December last year which showed a downtrend of crime incidents regionwide.

From 1,412 incidents in November 2010, it steadily went down to 1,084 in December 2010, 964 in January 2011 and slightly increased to 971 in February this year. PIPS likewise reduced the occurrence of shooting incidents in the region with 48 cases recorded in November 2010 which slightly increased to 54 in December of the same year. But significantly nosedived to 48 and 36 in January and February this year, respectively. Assessment. Even with the modest accomplishment of the PRO 1 in lessening the incidence of crime in the region, they remained focused in addressing other police related concerns. Police intervention efforts should be improved to address the rising trend of shooting incidents. Likewise, there is a felt need to improve the solution of high profile crimes, particularly politically-motivated cases where the victims are elected local government officials. Police investigators are constrained in solving these crimes considering the modus operandi employed by the perpetrators and the lack of credible witnesses to testify. By and large, police authorities in the region believe that with the full support of local government officials and utmost cooperation and participation of all sectors of the community, a more peaceful atmosphere will be attained throughout the region. October 11, 2011

One Luzon, a daily electronic news magazine of the Phiippine Information Agency