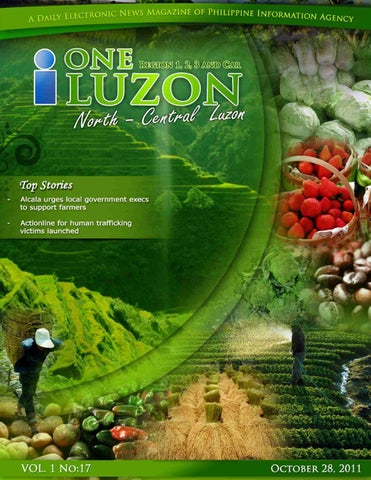 Promoting highland vegetable industry Agriculture which is the main source of livelihood in many parts of the country has travailed and withstood a multitude of challenges and faces increasing agricultural development needs and services as the Philippines aims for food sufficiency. The vegetable industry for instance in the province of Benguet, which supplies majority of the highland vegetables or the temperate vegetables, was in threat at some point. Vegetables such as lettuce, cauliflower, broccoli, carrots, potatoes, snap beans, peas, bell pepper spice up the tossed salads, burgers, French fries found in major food chains and high-end hotels and restaurants. Sometime in mid-90s, the vegetable industry in Benguet was threatened due to the so called green menace or the cyanide scare but was short lived and contained due to government intervention. Farmers were taught the ill effects and were braced on field training on the Integrated Pest Management method. There was also the importation of vegetables competing with those produced locally and &#39;is hurting the industry&#39;, to quote Governor Nestor Fongwan. To make the products globally competitive, adding value to crops and prolonging shelf life was the call of the time. There was the provision of the cold chain system which includes facilities such as cold storage, refrigerated vans or reefer trucks among to ensure continuous refrigerated handling of veggies from the farms to the market. This also includes the provision of minimal processing plant which gives value to the produce intended for high-end markets where some farmer organizations utilize recognizing the impact to their markets. There, too, is perennial problem on the typhoons and continuous rains which brings damages to agricultural crops. There is still much needed farm-to-market roads to transport the produce otherwise the poor farmer rather leaves his commodities in the farm to use it to replenish the depleting soil nutrients. Irrigation and other post harvest facilities are needed. As some consumers are now health conscious, the Department of Agriculture is now promoting organic farming and farmers are now shifting from inorganic to organic fertilizer application. The trend on organic farming which generates higher income compared to traditional method of farming is on the upsurge. The industry has a great potential in the global market but is still wanting of support in terms of better credit assistance for capital outlay, additional FMRs, among others. While the government is doing its share, farmers also have responsibility in keeping up with the standards and norms expected of them in improving their lot. Their attitude counts much in adapting to changes. Susan Aro, PIA-CAR

A Daily E-Magazine About Northern and Central Luzon