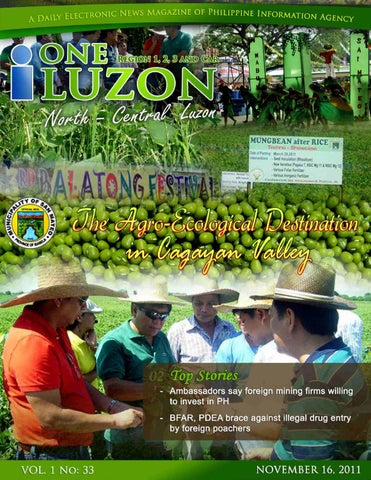 Province of Isabela is known as agricultural bowl of Cagayan Valley. Aside from rice, corn and vegetables, the province is rich with legumes, particularly “Munggo” or mungbean. San Mateo, a multi-awarded town and the agro-ecological destination of the province was declared as the country&#39;s “Munggo Capital,” being the number one producer of mungbean in the entire Philippines. The tourism department in the region lauded the municipality as the widest and greenest garden in the province for its wide munggo plantations, especially every after rice and corn harvesting. Agriculture Secretary Proceso J. Alcala ordered the research team of the agriculture department to explore more possibilities to improve the “munggo” variety that thrives in the town, thus making brighter opportunities exports in other countries.

Gawad Saka If the result of the annual Gawad Saka awards of the Department of Agriculture (DA) is a gauge, then, Cagayan Valley region may emerge as the most important region in the country today in terms of food sustainability. For the last ten years, the number of winnings of Region 2, as against the other regions, is quite impressive if one considers that it is located along typhoon paths. Based on official records, the region has garnered at least 80 national awards to date, a rather commendable number if one pays close attention to hundreds of agricultural individuals fielded annually from all over the Philippines. To say the least, all categories have been won by Cagayan Valley, even winning the same categories year after year after year. From outstanding corn farmer, rice farmer, fish farmer, Rural Improvement Club to municipal agricultural and fishery councils and all of the other categories, the region has never been wanting. The region prides itself as the center of corn, edging Northern Mindanao and is now a threat to Central Luzon in terms of rice production. In fact, the country now depends on our grains in most occasions that one cannot imagine those years when the region was isolated due to landslides. Add to that, is the title of Nueva Vizcaya as the fastest emerging fruit capital of the Philippines. Yet, planners claim that the region is still undeveloped if the number of families who still wallow in poverty would be the basis. Maybe, it&#39;s in the attitude. Maybe, it&#39;s in the opportunities or simply that in terms of population, the region&#39;s annual growth is encouraging. But the Gawad Saka is there to convince the agricultural sector that hope springs eternal. It&#39;s just a matter of convincing one&#39;s self that agricultural endeavours, though how small it is, can bring about the much needed change in their lives. Only then can we say that despite natural calamities, the region can be a bastion of productivity, if not in the country, in the Northeast Asia region. RD Purita S. Licas, PIA-2

Pasadang Pambarangay â&amp;#x20AC;&amp;#x201C; a free medical, dental and optical mission in line with the 50th Anniversary Celebration of DZEQ Radyo Ng Bayan Baguio in partnership with the City Government of Baguio