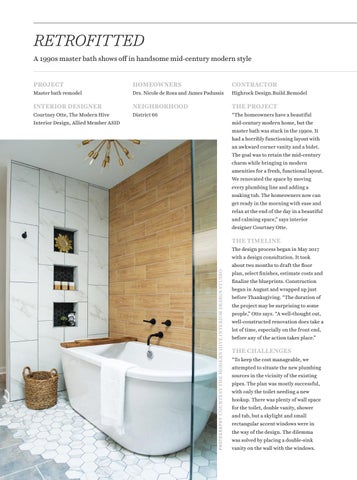 “The homeowners have a beautiful

mid-century modern home, but the master bath was stuck in the 1990s. It had a horribly functioning layout with an awkward corner vanity and a bidet. The goal was to retain the mid-century charm while bringing in modern amenities for a fresh, functional layout. We renovated the space by moving every plumbing line and adding a soaking tub. The homeowners now can get ready in the morning with ease and relax at the end of the day in a beautiful and calming space,” says interior designer Courtney Otte.

THE TIMELINE The design process began in May 2017 with a design consultation. It took

about two months to draft the floor

plan, select finishes, estimate costs and finalize the blueprints. Construction began in August and wrapped up just before Thanksgiving. “The duration of the project may be surprising to some people,” Otte says. “A well-thought out, well-constructed renovation does take a lot of time, especially on the front end, before any of the action takes place.”

THE CHALLENGES “To keep the cost manageable, we attempted to situate the new plumbing sources in the vicinity of the existing pipes. The plan was mostly successful, with only the toilet needing a new hookup. There was plenty of wall space for the toilet, double vanity, shower and tub, but a skylight and small rectangular accent windows were in the way of the design. The dilemma was solved by placing a double-sink vanity on the wall with the windows.