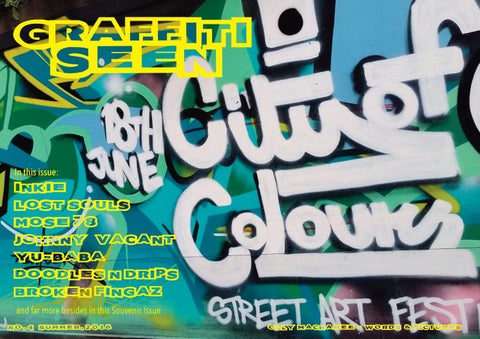 A spraymazing spectacle of sights, sounds and smells took over Digbeth this past weekend, thanks to the bombastic return of City of Colours, the graffiti festival that woke the neighbours, and partied hard all day and night, not ending until the very, very wee hours of Sunday morning. Arguably, as I slouched around the streets of Digbeth the next day, bumping into graffiti legends such as Bristol-based Inkie, and organisers Karl Paragreen and Becci Wright, for some the party hadn’t yet stopped, but by that point, I was happy to sit back and snap away at the indelible legacy left across this somewhat forgotten part of Birmingham. Certainly, for anyone who had ventured down into town, this should have been taken as a battle cry for what Digbeth could achieve, and what it should be achieving, not simply when the great guys behind Digbeth Dining Club and Dead Pixels rock up, come the weekend, but on a much more regular basis. Digbeth, take heed.

Hijacking Digbeth for the day, City of Colours brought with them their usual heady mix of family friendly market stalls, workshops and music as well as a virtual Who’s Who of the famous (and infamous) from the global graffiti scene. As well as the aforementioned Inkie, painting at Floodgate Yard down Floodgate Street, there was the likes of Broken Fingaz, straight outta Israel, Germany’s Eins92, as well as more domestic talents such as established artists Dank, Flake and Dale Grimshaw along with the new guns in town, Void One, ThatBlokeWilson and Mose 78, all bringing with them very different and diverse art styles to paint the town red, green, yellow, black and blue. Once again, over 120 artists descended on our city and once again, the city is all the better for their visit.

What made it bigger and better this time round was the growth in the willingness of local businesses to get involved. The Northern Soul nightclub, The Night Owl welcomed Simon Myers and Nigel John Hopkins fantastic Drink and Draw to the party, giving would be graff-artists the chance to doodle throughout the day while taking it all in. I must admit, while I did eventually get around all of Digbeth, the draw (pardon the pun) of good cheer and even better beer, all surrounded by art, music (wafting in from the nearby Listening Sessions DJ’s) and great food, courtesy of the aforementioned Digbeth Dining Club, as well as a base from which to operate out of, was too good an opportunity to pass up. From there, you could take a lot of it all in. At one point, even the Lord Mayor walked on by!

By 6 o’clock, even in my growing inebriated state, I could feel the change happening. Families with their kids started to set off for home and a more adult vibe began to creep in. Moving to The Old Crown - a huge supporter of City of Colours - to catch up with some good mates, and it was clear that the party crowd had arrived. I’d like to say, after that my memory was clear as crystal, but I can’t. What with my friends from the North as my trusty drinking buddies, as well as my own attempt to influence one or two daytime drinkers (they know who they are), the memories could be best described as muddled and muddy, like smeared spraypaint. By the time I hit PST for the afterparty, the smile was still firmly plastered to my face, having loved every minute of it, while the rest of me was equally plastered too. This was a day to remember for anyone who went, or could. A day that wore its colours proudly and once

again shouted out from each brick and each wall that this is Birmingham, and we should not be ignored. There is a whole creative community that without days like this, and all the efforts that go into planning, prepping and painting, could very easily be left untapped and undervalued. We live at a time when, if we allow it to, the Arts will disappearing from our education system and continue to be underfunded until a time when only business minded middle of the road party poopers will be all that’s left on the cultural horizon, thanks to a government that simply doesn’t care for it. Corporate Art with no soul and no function outside of persuading us to buy, buy, buy. The very antithesis of art, surely? The Tories don’t want us to think, to act, to speak out in protest through art. Graffiti, arguably, is one of the few remaining opportunities for people with less chances to gain access to the Arts to have a say, to be welcome. The last remaining truly working class art form? If so, let’s all celebrate our city, and let’s once again, come together and work towards a Birmingham that puts young people and the arts at the forefront. After all, paper and pens ain’t that expensive, but can be far mightier than any sword, as we are all aware of. Let events like City of Colours, then, be more than an annual event, but rather let’s all look to this as a blueprint for the survival of the Arts in this city of ours. Come on Birmingham, what are you waiting for? 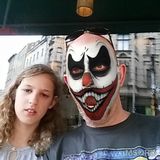 City of Colours Souvenir Issue - celebrating the spraymazing one-day graffiti festival that took place on June 18th in the heart of Birmingh...

City of Colours Souvenir Issue - celebrating the spraymazing one-day graffiti festival that took place on June 18th in the heart of Birmingh...