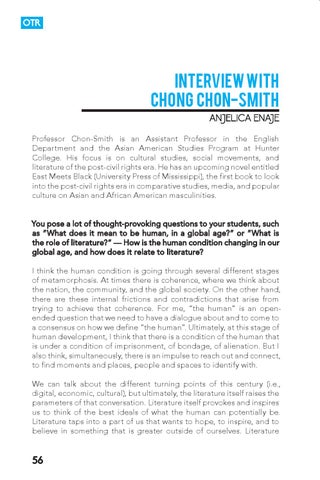 INTERVIEW WITH CHONG CHON-SMITH ANJELICA ENAJE Professor Chon-Smith is an Assistant Professor in the English Department and the Asian American Studies Program at Hunter College. His focus is on cultural studies, social movements, and literature of the post-civil rights era. He has an upcoming novel entitled East Meets Black (University Press of Mississippi), the first book to look into the post-civil rights era in comparative studies, media, and popular culture on Asian and African American masculinities. You pose a lot of thought-provoking questions to your students, such as “What does it mean to be human, in a global age?” or “What is the role of literature?” — How is the human condition changing in our global age, and how does it relate to literature? I think the human condition is going through several different stages of metamorphosis. At times there is coherence, where we think about the nation, the community, and the global society. On the other hand, there are these internal frictions and contradictions that arise from trying to achieve that coherence. For me, “the human” is an openended question that we need to have a dialogue about and to come to a consensus on how we define “the human”. Ultimately, at this stage of human development, I think that there is a condition of the human that is under a condition of imprisonment, of bondage, of alienation. But I also think, simultaneously, there is an impulse to reach out and connect, to find moments and places, people and spaces to identify with. We can talk about the different turning points of this century (i.e., digital, economic, cultural), but ultimately, the literature itself raises the parameters of that conversation. Literature itself provokes and inspires us to think of the best ideals of what the human can potentially be. Literature taps into a part of us that wants to hope, to inspire, and to believe in something that is greater outside of ourselves. Literature 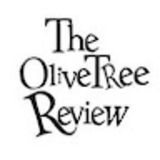