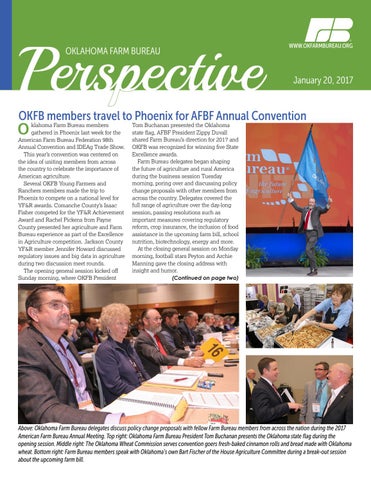 klahoma Farm Bureau members gathered in Phoenix last week for the American Farm Bureau Federation 98th Annual Convention and IDEAg Trade Show. This year’s convention was centered on the idea of uniting members from across the country to celebrate the importance of American agriculture. Several OKFB Young Farmers and Ranchers members made the trip to Phoenix to compete on a national level for YF&R awards. Comanche County’s Isaac Fisher competed for the YF&R Achievement Award and Rachel Pickens from Payne County presented her agriculture and Farm Bureau experience as part of the Excellence in Agriculture competition. Jackson County YF&R member Jennifer Howard discussed regulatory issues and big data in agriculture during two discussion meet rounds. The opening general session kicked off Sunday morning, where OKFB President

AFBF Convention (Continued from page one) The convention featured a variety of workshops on many topics, including a Farm Bill workshop presented by Oklahoma’s own Bart Fischer of the House Agriculture Committee. Other workshop topics included immigration, media training, crisis management, GMOs, antibiotics, agricultural literacy, and much more. Visit fb.org/newsroom for more convention details and media.

Congressional Action Tour registration open through Feb. 24 klahoma Farm Bureau members are invited to represent Oklahoma agriculture on Capitol Hill during the OKFB Congressional Action Tour March 28 – April 2, 2017. The trip allows OKFB members to interact face-to-face with Oklahoma’s Congressional delegation and their staff, hear briefings from the American Farm Bureau Federation’s government affairs staff, and experience life in the nation’s Capitol. “With the new administration in the White House, farmers and ranchers now can have a seat at the table in discussions on the farm bill, environmental regulations,

trade and more,” said Tom Buchanan, OKFB president. “Now more than ever, OKFB must make its priorities clear to lawmakers and government agencies. The Congressional Action Tour allows our members to do just that.” This year’s trip also will include a two-day trip to Annapolis, Maryland, featuring a dinner on the Chesapeake Bay and tours of the Historic Naval Academy and the Maryland State House. Participants are responsible for making their own travel arrangements. The deadline to register is February 24. For more information, contact Tasha Duncan at 405-530-2681.

AFBF Convention photos Flickr More photos from the American Farm Bureau Federation’s 98th Annual Meeting and IDEAg Trade Show have been uploaded to the OKFB Flickr page. From discussion meets to cinnamon rolls to informational workshops, the trip to Phoenix has been captured for you to see. To view, download, print and/or share the photos, go to flickr.com/photos/ okfarmbureau/albums.

Farm Bureau backs Oklahoma AG Pruitt for EPA Courtesy of OKAgPolicy amily farmers and ranchers from across the country overwhelmingly supported the confirmation of Oklahoma Attorney General Scott Pruitt as the Environmental Protection Agency administrator at the American Farm Bureau Federation Annual Meeting this week in Phoenix, Arizona. Farm Bureau members representing all 50 states and Puerto Rico on Tuesday urged Pruitt’s confirmation by adopting a resolution as the organization set its policy for the year. “We spent eight years with our legal team fighting the EPA when they came against our farmers,” said Zippy Duvall, AFBF president. “Now, it looks like we might be helping our EPA hold to what they want to do and that’s regulatory reform and taking the burden off of farmers and ranchers and small businesses.” With Pruitt at the helm of the EPA, Duvall said AFBF now can work with the agency rather than against it.

“We really think (Pruitt) understands the lawmaking process, he respects laws that Congress passes and he understands the limits of laws,” Duvall said. “He’s been a hero for us in working on Waters of the U.S. and we’re so excited about him taking that to the EPA. We think he’s going to be a great partner with rural America and farmers and ranchers across this country.” During his tenure as the state attorney general, Pruitt led the charge in challenging the Obama administration on EPA regulations including Waters of the U.S. and the Clean Power Plan. “We believe Scott Pruitt is the guy that can lead this agency back to its intended purpose, and AFBF is really supportive of that,” said Tom Buchanan, Oklahoma Farm Bureau president, who has worked with Pruitt to fight burdensome regulations on farmers and ranchers. Pruitt will ensure the EPA follows the law, instead of creating laws, Buchanan said.

“We believe that we need protection for the environment, but not at the expense of small businessmen, family farmers and ranchers, and landowners,” Buchanan said. “Pruitt is exactly the breath of fresh air that we need to pull back the regulatory environment that has really choked America’s farmers and ranchers.” Speaking at the OKFB annual meeting in November, Pruitt told Oklahoma farmers and ranchers he was confident that EPA’s onerous regulations would be repealed under the Trump administration. “WOTUS, the Clean Power Plan and immigration orders are all going to go away,” Pruitt said. “So in this case, we’ve won. We won’t have to keep litigating.” Pruitt must face a confirmation hearing before the Senate Committee on Environment and Public Works before being confirmed on the Senate floor.

staff’s hard work and dedication to serving our members. The Awards for Excellence were awarded to state Farm Bureaus that demonstrated outstanding achievements in six program areas. Oklahoma Farm Bureau applied for five of the six categories and received all five awards, including Education and Outreach; Leadership Development; Member Services; Policy Development and Implementation; and Public Relations and Communications. OKFB President Tom Buchanan accepted the awards on behalf of the organization.

Want to start this year by getting your finances in order? If you’re looking for checking, loans, CDs, money markets or credit cards, Farm Bureau Bank could be the best place to start! Call free at (800) 492-3276 or visit online at www.farmbureaubank.com to access a broad array of financial services for Farm Bureau members.

Oklahoma Farm Bureau members host booth at Annual KNID Agrifest his yearâ&#x20AC;&#x2122;s Annual KNID Agrifest was held at the Garfield County Fairgrounds in Enid, Oklahoma, January 13-14. On Friday, Garfield County Farm Bureau members Gary Johnson, Desdive Milacek and Elmer and Judy Anglin manned the booth. On Saturday, Kenny Ferda from Grant County joined Gary and Desdive to cover the booth throughout the day. Door prizes were given away to Agrifest attendees who signed up at the booth, and candy was given to kids who attended. Brochures and information on Farm Bureau was available and FB members visited with show attendees about the value of a Farm Bureau membership and the importance of the organization. The KNID Agrifest displayed more than $150 million in equipment and agriculture-related products from more than 300 vendors.

Perspective is the official leader newsletter of the Oklahoma Farm Bureau. In this issue, you can read about OKFB members' trip to AFBF Annu...

Perspective is the official leader newsletter of the Oklahoma Farm Bureau. In this issue, you can read about OKFB members' trip to AFBF Annu...