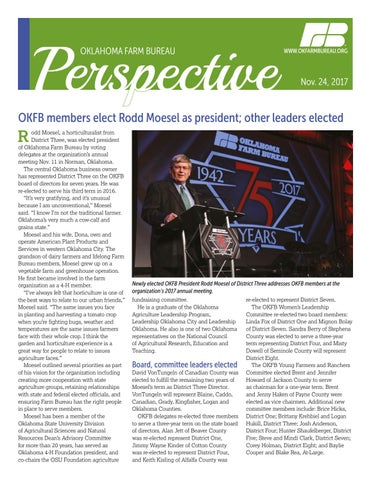 OKFB members elect Rodd Moesel as president; other leaders elected odd Moesel, a horticulturalist from District Three, was elected president of Oklahoma Farm Bureau by voting delegates at the organization’s annual meeting Nov. 11 in Norman, Oklahoma. The central Oklahoma business owner has represented District Three on the OKFB board of directors for seven years. He was re-elected to serve his third term in 2016. “It’s very gratifying, and it’s unusual because I am unconventional,” Moesel said. “I know I’m not the traditional farmer. Oklahoma’s very much a cow-calf and grains state.” Moesel and his wife, Dona, own and operate American Plant Products and Services in western Oklahoma City. The grandson of dairy farmers and lifelong Farm Bureau members, Moesel grew up on a vegetable farm and greenhouse operation. He first became involved in the farm organization as a 4-H member. “I’ve always felt that horticulture is one of the best ways to relate to our urban friends,” Moesel said. “The same issues you face in planting and harvesting a tomato crop when you’re fighting bugs, weather and temperatures are the same issues farmers face with their whole crop. I think the garden and horticulture experience is a great way for people to relate to issues agriculture faces.” Moesel outlined several priorities as part of his vision for the organization including creating more cooperation with state agriculture groups, retaining relationships with state and federal elected officials, and ensuring Farm Bureau has the right people in place to serve members. Moesel has been a member of the Oklahoma State University Division of Agricultural Sciences and Natural Resources Dean’s Advisory Committee for more than 20 years, has served as Oklahoma 4-H Foundation president, and co-chairs the OSU Foundation agriculture

Newly elected OKFB President Rodd Moesel of District Three addresses OKFB members at the organization’s 2017 annual meeting. fundraising committee. He is a graduate of the Oklahoma Agriculture Leadership Program, Leadership Oklahoma City and Leadership Oklahoma. He also is one of two Oklahoma representatives on the National Council of Agricultural Research, Education and Teaching.

Holcomb honored with Distinguished Service to OKFB Award hyllis Holcomb of Creek County was recognized with the Distinguished Service to Oklahoma Farm Bureau Award during the 2017 OKFB Annual Meeting Nov. 10 in Norman, Oklahoma. The award honors OKFB members who have made outstanding contributions to agriculture and Farm Bureau. “I have dedicated my life to the farming industry,” Holcomb said. “It’s just been in my heart and soul since I grew up.” A longtime member, Holcomb has served on the Creek County Farm Bureau board of directors, the OKFB Women’s Leadership Committee and the OKFB board of directors. “Farm Bureau does so much to help each farm family, legislatively and on their own farms and in their communities,” Holcomb said. “It’s just been a great organization since it was started in 1942. If you look

back at the history, where would farmers be without each of us?” Serving on numerous Farm Bureau committees and attending countless conventions and conferences, Holcomb has advocated for agriculture on behalf of family farmers and ranchers on both the state and national levels. “I was blown away,” Holcomb said of receiving Phyllis Holcomb (second from right) receives the 2017 the honor. “It’s so much Distinguished Service to OKFB award from AFBF President Zippy appreciated.” Duvall, OKFB President Tom Buchanan (left) and OKFB Interim Holcomb has spent more Executive Director Thad Doye (right) along with members of her than 30 years educating family at the OKFB annual meeting in Norman Nov. 10. Oklahoma’s youth on the importance of agriculture and rural leader and is an active supporter of FFA and Oklahoma. Holcomb has served as a 4-H 4-H programs throughout the state.

Tulsa County member named OKFB’s top young farmer and rancher had Selman of Skiatook was named the Oklahoma Farm Bureau Young Farmers and Ranchers Achievement Award winner Nov. 10 at the organization’s annual meeting in Norman, Oklahoma. Selman and his wife Katrina won the award for their dedication to improving and growing their farm, which consists of pecan orchards and cattle. The couple’s passion as young farmers have spurred them to modernize the family’s pecan farm, including the use of computer-controlled sorting machines. The young Tulsa County farmer also build his cow herd from the ground up – starting with 12 cows and growing to more

than 100 head today. Selman has been involved in a number of capacities for Farm Bureau, serving on the Tulsa County Farm Bureau board of directors, in addition to his service to the state OKFB YF&amp;R committee. He also serves as president of the Tulsa and Rogers County Farm Service Agency Board and is the vice president of the Oklahoma Pecan Growers Association. As the Achievement Award winner, Selman received a John Deere XUV 560 courtesy of the OKFB YF&amp;R state committee and a trip to compete in the national contest at the 2017 American Farm Bureau Federation Annual Meeting.

Browse and download photos from the OKFB Annual Meeting on flickr Want to see more from this year’s annual meeting? Check out pictures of the event by visiting the OKFB flickr page. Featuring photos from general sessions, the awards program, luncheons, the banquet and more, flickr allows you to browse through and download your favorites. Find the OKFB flickr page at www.flickr.com/photos/okfarmbureau.

adults ages 35 years or younger who are involved in farming, but whose primary occupations are not farming or owning an agricultural business. Winners are chosen based on their involvement in agriculture, Farm Bureau and community organizations. “It’s a real honor,” Farris said. “I’m proud to be able to represent Oklahoma, my family and Stephens County.” A fourth-generation farmer and rancher, Farris raises cattle and grows wheat and hay with his family in Stephens County. Farris works off the farm as a banker specializing in production agriculture loans. As the Excellence in Agriculture Award winner, Farris received a Polaris fourwheeler, courtesy of Farm Credit of Western Oklahoma and Oklahoma AgCredit, and a trip to the American Farm Bureau Federation Annual Meeting Jan. 5-10, where he will compete for the AFBF Excellence in Agriculture Award.

Garfield County honored with John I. Taylor Award arfield County Farm Bureau was honored with the John I. Taylor Award during this year’s OKFB Annual Meeting Nov. 10 in Norman, Oklahoma. Named after OKFB’s first president, the award serves as the organization’s highest county honor. County winners are required to earn the Four-Star Presidential Award and excel in at least six program areas.

District Nine Kenneth and Debbie Fisher Creek County *Look for our full coverage of the District Farm and Ranch Family Recognition in the next issue of Perspective.

Prepare your home for spring storms! Storm Safe Shelters has provided Oklahomans with safe-havens during severe storms since 1987. Storm Safe gives OKFB members a $100 discount on the purchase of a qualifying Storm Safe in-ground shelter. Call Chris at 405-204-9223 or visit the Storm Safe Shelters website at www.stormsafeshelters.com.

OKFB members set grassroots policy for 2018 axes and rural healthcare were at the top of the list as Oklahoma Farm Bureau members finalized the organization’s 2018 policy during its 2017 annual meeting Nov. 10-12 in Norman, Oklahoma. OKFB’s grassroots policy begins at the county level before being refined by a state resolutions committee and finalized by the delegate body at state convention. OKFB advocates for the policy on behalf of its farm and ranch members at the state Capitol.

Tax policy As the state of Oklahoma continues to grapple with budget shortfalls, state lawmakers have attempted to raise revenue by implementing various tax increases. Members this year heavily considered the organization’s stance on a number of tax issues including fuel tax, ad valorem tax, wind production tax incentives and the agricultural sales tax exemption. Approved by an overwhelming majority of the delegate body, members voted to support a maximum 6-cent increase in gasoline and diesel taxes dedicated to

roads and bridges. Members also passed a resolution favoring fuel taxes or state sales taxes over any ad valorem tax increases. Reversing the organization’s policy on wind generation, members voted to support elimination of tax breaks for wind power and encouraged levying a competitive tax rate on wind production in Oklahoma. After the state Legislature narrowly stalled a bill to allow municipalities access to ad valorem taxes, Farm Bureau members this year reinforced the organization’s policy on property tax increases. “We oppose any increase to rural ad valorem taxes by any municipality,” the resolution states. With this summer’s Oklahoma Supreme Court ruling that elimination of existing sales tax exemptions require only a simple majority vote by the state Legislature, members also backed a resolution to give agricultural inputs non-taxed status rather than only tax exempt.

As feral swine continue to wreak havoc on farms and ranches across the state, Farm Bureau members called for increased funding for the Oklahoma Department of Agriculture, Food and Forestry to finance USDA Wildlife Services efforts to control the feral swine population. Members also reversed a key water policy by opposing all out-of-state water sales.

Perspective is the official leader newsletter of the Oklahoma Farm Bureau. In this issue, you'll find results from the OKFB Annual Meeting including elections of new leaders, award winners and grassroots policy updates. 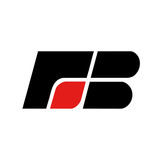