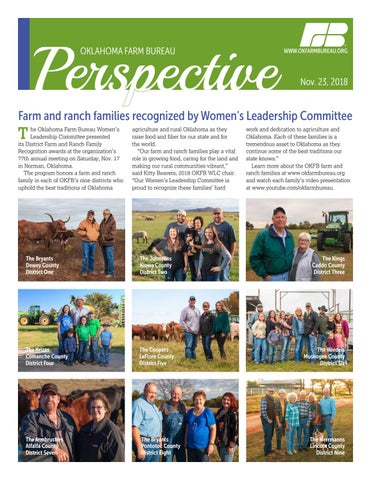 Farm and ranch families recognized by Women’s Leadership Committee he Oklahoma Farm Bureau Women’s Leadership Committee presented its District Farm and Ranch Family Recognition awards at the organization’s 77th annual meeting on Saturday, Nov. 17 in Norman, Oklahoma. The program honors a farm and ranch family in each of OKFB’s nine districts who uphold the best traditions of Oklahoma

agriculture and rural Oklahoma as they raise food and fiber for our state and for the world. “Our farm and ranch families play a vital role in growing food, caring for the land and making our rural communities vibrant,” said Kitty Beavers, 2018 OKFB WLC chair. “Our Women’s Leadership Committee is proud to recognize these families’ hard

The Bryants Dewey County District One

work and dedication to agriculture and Oklahoma. Each of these families is a tremendous asset to Oklahoma as they continue some of the best traditions our state knows.” Learn more about the OKFB farm and ranch families at www.okfarmbureau.org and watch each family’s video presentation at www.youtube.com/okfarmbureau.

Bureau,” said Ryan Pjesky, Alfalfa County Farm Bureau president. “It’s good to be rewarded for the hard work and effort of all the members and board members that participated.” Alfalfa County was honored for excelling in the program areas of public policy, local affairs, service to members, Women’s Leadership Committee and Young Farmers and Ranchers Committee.

Texas County wins Lewis H. Munn Award exas County Farm Bureau was honored with Oklahoma Farm Bureau’s Lewis H. Munn Award on Saturday, Nov. 17 during the organization’s 77th annual meeting in Norman. Also known as the Farm Bureau Builders Award, the award is presented each year to the county that conducts the strongest program in a chosen area. This year, the program area was safety. “(Winning the award) was a total surprise,” said Leon Richards, Texas County Farm Bureau president. “We worked very hard at it. Particularly our county secretary, Cheslea, really worked on scheduling the safety people to come out. We sure appreciate and thank her for all the hard work she’s done.” Texas County hosted a variety of safety trainings this year for members

Texas County Farm Bureau President Leon Richards (left) accepts the Lewis H. Munn Award from OKFB President Rodd Moesel during the awards banquet on Nov. 17. and the community, including fire safety, school bus safety, bicycle safety and DUI prevention. “Hopefully, if it saves just one life, it’ll be worth all the work that goes into it,” Richards said.

oting delegates re-elected three board members and elected other leaders at Oklahoma Farm Bureau’s 77th Annual Meeting Nov. 16-18 in Norman, Oklahoma. Monte Tucker of Sweetwater was re-elected to a three-year term on the OKFB board of directors representing District Two. Members in District Five re-elected Gary Crawley of Savanna to serve a three-year term on the OKFB board of directors. Shawnee-native John Grundmann was re-elected to a three-year term representing District Eight on OKFB’s board of directors. The OKFB Women’s Leadership Committee chose Mignon Bolay of Noble County to lead the committee as chair for the next two years. She replaces Kitty Beavers, who was termlimited after eight years as chair. WLC delegates also re-elected Paula Sawatzky of Custer County to represent District Two on the WLC. Three new members were elected to the state committee including Arlene Lemaster of LeFlore County, chosen to represent District Five; Terry Pederson of Alfalfa County, District Seven; and Jan Long of Pontotoc County, District Eight. The OKFB Young Farmers and Ranchers Committee elected Brent and Jenny Haken of Payne County to serve as chairs for a one-year term. Justin and Chrissy Maxey of Nowata County were elected as vice chairs and Logan and Brittany Hukill of Caddo County will serve in the position of committee secretary. Additional YF&R committee members elected this year include Nocona and Jordan Cook, Washita County, District Two; Corey Holman, Pottawatomie County, District Eight; Chism Sander, Dewey County, at-large; Will and Leslie Lewis, Okmulgee County, at-large; and Ethan and Roxanne Mock, Tulsa County, at-large.

Anderson wins YF&R Excellence in Agriculture Award oshua Anderson of Mannsville was honored with the Oklahoma Farm Bureau Young Farmers and Ranchers Excellence in Agriculture Award on Nov. 17 at the organization’s annual meeting. Anderson is a third-generation producer who raises beef cattle, grows forage crops, and manages natural resources on land first owned by his grandfather and father. “I was born and raised on a farm, so the passion for agriculture was instilled early on through our family farm,” Anderson said. He uses his knowledge and experience in agriculture every day in his off-farm job as a Noble Research Institute research associate where he helps develop varieties of wheat, rye, oats and triticale for livestock producers to use as grazing forages. “I love research and extension. I’ve had that desire all through college, and to be able to come back home and work for a company that is passionate about research, extension and providing consultation to producers is very meaningful for me,” Anderson said. “Being able to give back to those who produce our food and fiber is an awesome feeling.” Anderson serves on the OKFB YF&R committee and on OKFB’s political action committee board of directors. He also serves on the Johnston County Farm Bureau board of directors. As the winner, Anderson received a Polaris Sportsman 450 ATV, courtesy of Farm Credit of Western Oklahoma and Oklahoma AgCredit and a trip to compete at the American Farm Bureau Federation Annual Meeting in January.

Washita County couple named OKFB’s top young farmers and ranchers ocona and Jordan Cook were named Oklahoma Farm Bureau Young Farmers and Ranchers Achievement Award Winners at the organization’s 2018 annual meeting on Nov. 17 in Norman, Oklahoma. The Cooks received the recognition for their dedication as young agriculturalists, raising cattle and growing wheat, hay, cotton and other crops in western Oklahoma’s Washita County. Both Nocona and Jordan were raised in Washita County – Nocona on the east side near the town of Cloud Chief and Jordan on the west side near Burns Flat. Today, they live in Cordell and each morning, they drive separate directions to work on the land and with the cattle they grew up around. Nocona works alongside his family as the fifth generation on the land, raising wheat, alfalfa, cotton, millet and other crops in addition to running a commercial cow

herd. He also raises stocker cattle on wheat pasture during winter months. Jordan is a third-generation breeding stock producer with a registered Angus cattle herd raising high-quality animals her family sells at an annual production sale. Though both Nocona and Jordan had the choice to move away from agriculture after college, neither could imagine doing anything else or raising their two boys, Denton and Baylor, any other way. “It’s just something that you grow up with and you have a passion for,” Nocona said. “I knew from the time I was big enough to know what was going on that that’s what I wanted to do for a living.” As winners, the Cooks received a John Deere XUV 560E courtesy of the OKFB YF&R committee and a trip to compete at the 2019 American Farm Bureau Federation Annual Meeting.

Goodknight, Comanche County YF&R chair. “We love being a part of the group where we get to support what we do every day for living.” The county earned the award for its work to share agriculture with surrounding communities, along with efforts to provide educational and leadership development opportunities for members. Learn more about Comanche County YF&R’s work on the OKFB website.