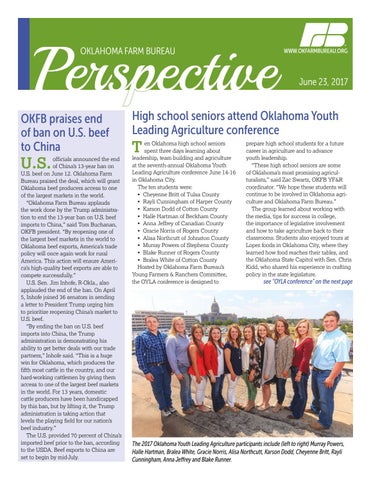 OKFB praises end of ban on U.S. beef to China officials announced the end of China’s 13-year ban on U.S. beef on June 12. Oklahoma Farm Bureau praised the deal, which will grant Oklahoma beef producers access to one of the largest markets in the world. “Oklahoma Farm Bureau applauds the work done by the Trump administration to end the 13-year ban on U.S. beef imports to China,” said Tom Buchanan, OKFB president. “By reopening one of the largest beef markets in the world to Oklahoma beef exports, America’s trade policy will once again work for rural America. This action will ensure America’s high-quality beef exports are able to compete successfully.” U.S. Sen. Jim Inhofe, R-Okla., also applauded the end of the ban. On April 5, Inhofe joined 36 senators in sending a letter to President Trump urging him to prioritize reopening China’s market to U.S. beef. “By ending the ban on U.S. beef imports into China, the Trump administration is demonstrating his ability to get better deals with our trade partners,” Inhofe said. “This is a huge win for Oklahoma, which produces the fifth most cattle in the country, and our hard-working cattlemen by giving them access to one of the largest beef markets in the world. For 13 years, domestic cattle producers have been handicapped by this ban, but by lifting it, the Trump administration is taking action that levels the playing field for our nation’s beef industry.” The U.S. provided 70 percent of China’s imported beef prior to the ban, according to the USDA. Beef exports to China are set to begin by mid-July.

prepare high school students for a future career in agriculture and to advance youth leadership. “These high school seniors are some of Oklahoma’s most promising agriculturalists,” said Zac Swartz, OKFB YF&R coordinator. “We hope these students will continue to be involved in Oklahoma agriculture and Oklahoma Farm Bureau.” The group learned about working with the media, tips for success in college, the importance of legislative involvement and how to take agriculture back to their classrooms. Students also enjoyed tours at Lopez foods in Oklahoma City, where they learned how food reaches their tables, and the Oklahoma State Capitol with Sen. Chris Kidd, who shared his experience in crafting policy in the state legislature.

see “OYLA conference” on the next page

Oklahoma Farm Bureau President Tom Buchanan emphasizes the importance of addressing the state’s critical water infrastructure needs during a tour of the McClellan-Kerr Arkansas River Navigational System June 9. Hosted along with Kansas Farm Bureau, the tour highlighted the impact of MKARNS on the Oklahoma and regional economies. Watch Buchanan’s speech at the event on the OKAgPolicy Facebook page. Photo courtesy of Oklahoma Department of Transportation.

continued from the first page

“We had great activities for this year’s group,” Swartz said. “These tours and sessions will help students further their career goals through enhanced leadership training and education.” The students attending the conference have a wide variety of agricultural career interests and are choosing degrees spanning the agriculture spectrum, including business, pre-law, agricultural communications, marketing, pre-medicine, animal science, engineering, agricultural education, agricultural economics and pre-vet. Participants of the conference were selected through an application process. For more photos, find the link to the OYLA Flickr album on the OKFB website.

Above left: OYLA attendees listen as Sen. Chris Kidd explains how policy is created in the legislature. Above right: OKFB President Buchanan speaks to students about the importance of the organization and how OKFB continues to serve farmers and ranchers. Right: OYLA members take to the skies at UCO Outdoor Recreation to build their leadership skills.

Oklahoma Farm Bureau Online Why should you be an OKFB member? Want an easy way to show others why they should become an OKFB member? Let them hear a few reasons straight from state board director Monte Tucker himself! The OKFB District 2 Director from Roger Mills County outlines some of the best perks of being a Farm Bureau member in a short video shared on the OKFB Facebook page.

thrives into the future.” Mielke, who holds a bachelor’s degree in agricultural communications from Oklahoma State University, has more than 11 years of experience with the organization’s communications department. He grew up in the small agricultural community of Conrad, Montana, Dustin Mielke and resides in Edmond, Oklahoma, with his wife Li. Nemecek was named senior director of policy communications. In the new position, she will lead Farm Bureau messaging on state and national policy issues as she also maintains and improves the visuals of OKFB’s legislative efforts. “Now more than ever, elected officials and the public must understand the needs of agriculture and rural Oklahoma,” Nemecek said. “I’m eager to continue providing a

Hannah Nemecek voice for farmers and ranchers at the state Capitol, in Washington, D.C., and beyond.” Nemecek previously served as director of public policy communications after beginning her career with OKFB in 2015 as a communications specialist. She also earned a bachelor’s degree in agricultural communications at OSU. Nemecek grew up on a small swine operation in Skiatook, Oklahoma, and now resides in Oklahoma City.

KFB YF&R members will meet for their annual leadership conference July 13-15 in Ardmore. Find the registration form on the OKFB website and send the completed form to Zac Swartz by email to Zac.Swartz@okfb.com or by mail to Zac Swartz, 2501 N. Stiles, Oklahoma City, OK 73105. Please call to reserve a hotel room at the Holiday Inn in Ardmore at (580) 226-3333 by June 26. For more information, contact Zac Swartz at (405) 523-2406.

Syd Morgan, Seminole County Farm Bureau board president, presents a $2,000 college scholarship to Logan Long, who is a senior at Seminole High School.

Summer is the perfect time to enjoy the outdoors, and ICEHOLE Coolers offers a great deal for OKFB members to help keep your drinks colder and your food fresher. With a 10 percent discount, you can purchase a high-performance product at a cost you can afford!

CELEBRATING OKLAHOMA FARM BUREAU’S 75 YEARS Take a trip back in Oklahoma Farm Bureau’s history to some of the key moments of the formation of state’s largest agricultural organization.

John I. Taylor, first president of Oklahoma Farm Bureau, on his ranch in Comanche County.

am a human being living in a land of unlimited horizon. Having been born here, or journeyed here by choice, matters little, but the fact that my life and living are here is of great importance. The obligations to my country are few – to vote; to defend its soil; to help make its laws; to obey laws; to render judgment upon offenders; to pay a share of the bills; and to do such other things as will promote peace, harmony, and the general welfare. The privileges are many – to speak freely; to meet unhindered; to worship openly; to travel at will; to work at tasks of my choice; to play at my convenience; to visit and be visited; to love and be loved; to accept rewards for merit and practice charity. Oft’ times these obligations are forgotten

and these privileges taken for granted. To forever maintain the latter, a solemn pledge must be taken, and vitalized to fulfill the former. As a Farm Bureau member, I am willing to assume such a vow and extend my influence, by precept and example, to other people and groups, so that our heritage may be transmitted unimpaired to posterity. Morality, selflessness, and vigilance are watch-words to be my guide, and labor to do the task will be my aim. The bonds of tyranny shall not be my lot nor that of any free man, so long as God shall grant me strength to do his will, and to cherish my full duty of American citizenship.