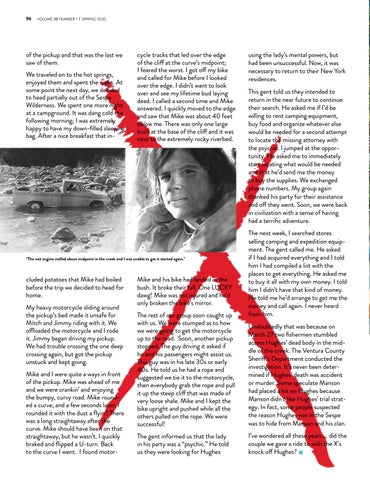 of the pickup and that was the last we saw of them. We traveled on to the hot springs, enjoyed them and spent the night. At some point the next day, we decided to head partially out of the Sespe Wilderness. We spent one more night at a campground. It was dang cold the following morning; I was extremely happy to have my down-filled sleeping bag. After a nice breakfast that in-

cycle tracks that led over the edge of the cliff at the curve’s midpoint; I feared the worst. I got off my bike and called for Mike before I looked over the edge. I didn’t want to look over and see my lifetime bud laying dead. I called a second time and Mike answered. I quickly moved to the edge and saw that Mike was about 40 feet below me. There was only one large bush at the base of the cliff and it was next to the extremely rocky riverbed.

“The wet engine stalled about midpoint in the creek and I was unable to get it started again.”

cluded potatoes that Mike had boiled before the trip we decided to head for home. My heavy motorcycle sliding around the pickup’s bed made it unsafe for Mitch and Jimmy riding with it. We offloaded the motorcycle and I rode it. Jimmy began driving my pickup. We had trouble crossing the one deep crossing again, but got the pickup unstuck and kept going. Mike and I were quite a ways in front of the pickup. Mike was ahead of me and we were crankin’ and enjoying the bumpy, curvy road. Mike rounded a curve, and a few seconds later, I rounded it with the dust a flyin’! There was a long straightaway after the curve. Mike should have been on that straightaway, but he wasn’t. I quickly braked and flipped a U-turn. Back to the curve I went. I found motor-

Mike and his bike had landed in the bush. It broke their fall. One LUCKY dawg! Mike was not injured and he’d only broken the bike’s mirror. The rest of our group soon caught up with us. We were stumped as to how we were going to get the motorcycle up to the road. Soon, another pickup stopped. The guy driving it asked if he and his passengers might assist us. This guy was in his late 30s or early 40s. He told us he had a rope and suggested we tie it to the motorcycle, then everybody grab the rope and pull it up the steep cliff that was made of very loose shale. Mike and I kept the bike upright and pushed while all the others pulled on the rope. We were successful! The gent informed us that the lady in his party was a “psychic.” He told us they were looking for Hughes

using the lady’s mental powers, but had been unsuccessful. Now, it was necessary to return to their New York residences. This gent told us they intended to return in the near future to continue their search. He asked me if I’d be willing to rent camping equipment, buy food and organize whatever else would be needed for a second attempt to locate the missing attorney with the psychic. I jumped at the opportunity. He asked me to immediately start locating what would be needed and that he’d send me the money to buy the supplies. We exchanged phone numbers. My group again thanked his party for their assistance and off they went. Soon, we were back in civilization with a sense of having had a terrific adventure. The next week, I searched stores selling camping and expedition equipment. The gent called me. He asked if I had acquired everything and I told him I had compiled a list with the places to get everything. He asked me to buy it all with my own money. I told him I didn’t have that kind of money. He told me he’d arrange to get me the money and call again. I never heard from him. Undoubtedly that was because on March 27 two fishermen stumbled across Hughes’ dead body in the middle of the creek. The Ventura County Sheriff’s Department conducted the investigation. It’s never been determined if Hughes’ death was accident or murder. Some speculate Manson had placed a hit on Hughes because Manson didn’t like Hughes’ trial strategy. In fact, some people suspected the reason Hughes was in the Sespe was to hide from Manson and his clan. I’ve wondered all these years … did the couple we gave a ride to with the X’s knock off Hughes?