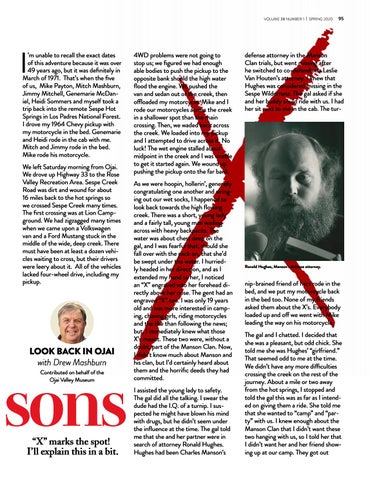 ’m unable to recall the exact dates of this adventure because it was over 49 years ago, but it was definitely in March of 1971. That’s when the five of us, Mike Payton, Mitch Mashburn, Jimmy Mitchell, Genemarie McDaniel, Heidi Sommers and myself took a trip back into the remote Sespe Hot Springs in Los Padres National Forest. I drove my 1964 Chevy pickup with my motorcycle in the bed. Genemarie and Heidi rode in the cab with me. Mitch and Jimmy rode in the bed. Mike rode his motorcycle. We left Saturday morning from Ojai. We drove up Highway 33 to the Rose Valley Recreation Area. Sespe Creek Road was dirt and wound for about 16 miles back to the hot springs so we crossed Sespe Creek many times. The first crossing was at Lion Campground. We had zigzagged many times when we came upon a Volkswagen van and a Ford Mustang stuck in the middle of the wide, deep creek. There must have been at least a dozen vehicles waiting to cross, but their drivers were leery about it. All of the vehicles lacked four-wheel drive, including my pickup.

4WD problems were not going to stop us; we figured we had enough able bodies to push the pickup to the opposite bank should the high water flood the engine. We pushed the van and sedan out of the creek, then offloaded my motorcycle. Mike and I rode our motorcycles across the creek in a shallower spot than the main crossing. Then, we waded back across the creek. We loaded into my pickup and I attempted to drive across it. No luck! The wet engine stalled about midpoint in the creek and I was unable to get it started again. We wound up pushing the pickup onto the far bank.

Contributed on behalf of the Ojai Valley Museum

As we were hoopin, hollerin’, generally congratulating one another and wringing out our wet socks, I happened to look back towards the high flowing creek. There was a short, young lady and a fairly tall, young man wading across with heavy backpacks. The water was about chest deep on the gal, and I was fearful that, should she fall over with the pack on, that she’d be swept under the water. I hurriedly headed in her direction, and as I extended my hand to her, I noticed an “X” engraved into her forehead directly above her nose. The gent had an engraved “X” too. I was only 19 years old and was more interested in camping, chasing girls, riding motorcycles and the like than following the news; but, I immediately knew what those X’s meant. These two were, without a doubt, part of the Manson Clan. Now, I didn’t know much about Manson and his clan, but I’d certainly heard about them and the horrific deeds they had committed.

“X” marks the spot! I’ll explain this in a bit.

I assisted the young lady to safety. The gal did all the talking. I swear the dude had the I.Q. of a turnip. I suspected he might have blown his mind with drugs, but he didn’t seem under the influence at the time. The gal told me that she and her partner were in search of attorney Ronald Hughes. Hughes had been Charles Manson’s

LOOK BACK IN OJAI with Drew Mashburn

defense attorney in the Manson Clan trials, but went missing after he switched to co-defendants Leslie Van Houten’s attorney. I knew that Hughes was considered missing in the Sespe Wilderness. The gal asked if she and her buddy could ride with us. I had her sit next to me in the cab. The tur-

nip-brained friend of hers rode in the bed, and we put my motorcycle back in the bed too. None of my friends asked them about the X’s. Everybody loaded up and off we went with Mike leading the way on his motorcycle. The gal and I chatted. I decided that she was a pleasant, but odd chick. She told me she was Hughes’ “girlfriend.” That seemed odd to me at the time. We didn’t have any more difficulties crossing the creek on the rest of the journey. About a mile or two away from the hot springs, I stopped and told the gal this was as far as I intended on giving them a ride. She told me that she wanted to “camp” and “party” with us. I knew enough about the Manson Clan that I didn’t want these two hanging with us, so I told her that I didn’t want her and her friend showing up at our camp. They got out