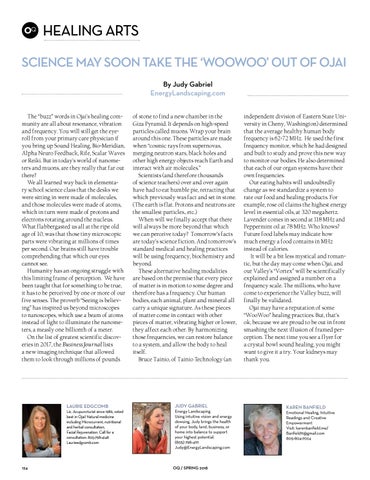 HEALING ARTS SCIENCE MAY SOON TAKE THE ‘WOOWOO’ OUT OF OJAI By Judy Gabriel EnergyLandscaping.com The “buzz” words in Ojai’s healing community are all about resonance, vibration and frequency. You will still get the eyeroll from your primary care physician if you bring up Sound Healing, Bio-Meridian, Alpha Neuro Feedback, Rife, Scalar Waves or Reiki. But in today’s world of nanometers and muons, are they really that far out there? We all learned way back in elementary school science class that the desks we were sitting in were made of molecules, and those molecules were made of atoms, which in turn were made of protons and electrons rotating around the nucleus. What flabbergasted us all at the ripe old age of 10, was that those tiny microscopic parts were vibrating at millions of times per second. Our brains still have trouble comprehending that which our eyes cannot see. Humanity has an ongoing struggle with this limiting frame of perception. We have been taught that for something to be true, it has to be perceived by one or more of our five senses. The proverb “Seeing is believing” has inspired us beyond microscopes to nanoscopes, which use a beam of atoms instead of light to illuminate the nanometers, a measly one billionth of a meter. On the list of greatest scientific discoveries in 2017, the Business Journal lists a new imaging technique that allowed them to look through millions of pounds

of stone to find a new chamber in the Giza Pyramid. It depends on high-speed particles called muons. Wrap your brain around this one. These particles are made when “cosmic rays from supernovas, merging neutron stars, black holes and other high energy objects reach Earth and interact with air molecules.” Scientists (and therefore thousands of science teachers) over and over again have had to eat humble pie, retracting that which previously was fact and set in stone. (The earth is flat. Protons and neutrons are the smallest particles., etc.) When will we finally accept that there will always be more beyond that which we can perceive today? Tomorrow’s facts are today’s science fiction. And tomorrow’s standard medical and healing practices will be using frequency, biochemistry and beyond. These alternative healing modalities are based on the premise that every piece of matter is in motion to some degree and therefore has a frequency. Our human bodies, each animal, plant and mineral all carry a unique signature. As these pieces of matter come in contact with other pieces of matter, vibrating higher or lower, they affect each other. By harmonizing those frequencies, we can restore balance to a system, and allow the body to heal itself. Bruce Tainio, of Tainio Technology (an

independent division of Eastern State University in Cheny, Washington) determined that the average healthy human body frequency is 62-72 MHz. He used the first frequency monitor, which he had designed and built to study and prove this new way to monitor our bodies. He also determined that each of our organ systems have their own frequencies. Our eating habits will undoubtedly change as we standardize a system to rate our food and healing products. For example, rose oil claims the highest energy level in essential oils, at 320 megahertz. Lavender comes in second at 118 MHz and Peppermint oil at 78 MHz. Who knows? Future food labels may indicate how much energy a food contains in MHz instead of calories. It will be a bit less mystical and romantic, but the day may come when Ojai, and our Valley’s “Vortex” will be scientifically explained and assigned a number on a frequency scale. The millions, who have come to experience the Valley buzz, will finally be validated. Ojai may have a reputation of some “WooWoo” healing practices. But, that’s ok, because we are proud to be out in front smashing the next illusion of framed perception. The next time you see a flyer for a crystal bowl sound healing, you might want to give it a try. Your kidneys may thank you.