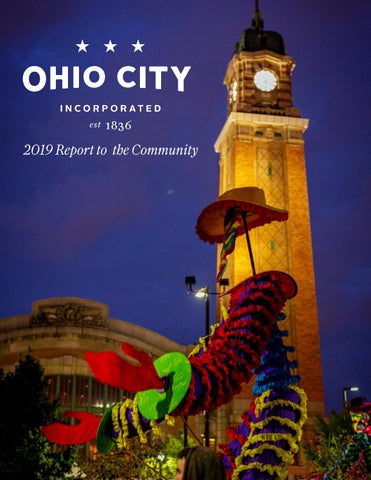 2019 Report to the Community

O H I O C I T Y I N CO R P O R AT E D i s a s m a l l tea m o f o rga n i ze rs , planners, marketers, and leaders working to promote the growth of the Ohio City neighborhood, and help to better the quality of life for the community we serve.

15 new businesses opened in the neighborhood in 2019

Talk of the Town series elevated resident voices and concerns

Welcome Letter Dear Ohio City Stakeholder, For the past three years, Ohio City Incorporated has been working from our Access and Mobility strategic vision. As we begin to wind down the work of that vision, we are able to take stock of how the organization has built upon the legacy of the previous plans and how we as an organization-and a neighborhood-have evolved. Our past two strategic plans laid out a path that would serve the neighborhood holistically, focusing on the individuals, businesses, and nonprofits that make Ohio City unique. As the organization has evolved, our language has evolved. We have moved from People, Place, Promotion, to a language that better communicates our approachâ&#x20AC;&#x201D;Placemaking, Quality of Life, and Telling Our Story. We understand the role of being committed to a diverse neighborhood, while also having the responsibility of maintaining a regional destination. We strive to support placemaking efforts that continue to build our community, but also understand the importance of placekeeping that maintains the values and culturally important assets for those who have been part of our neighborhoods growth. To that end, it is important now more than ever to come together as a community to define our collective future as neighbors. We are a growing and dynamic neighborhood. We believe that everyone can and should benefit from this growth and change. The following pages highlight how our residents have come together over the past year to build relationships and create change for their community. We thank each of you for your passion and commitment to work with each other, and with us, as we move the neighborhood forward together.

QUALITY OF LIFE What a difference in the neighborhood since the inception of the Special Improvement District. Better community relationships, security, cleanliness, snow removal, residential and commercial growth and a shared vision among the property owners and residents. A diverse population working together has produced fabulous results.

QUALITY OF LIFE By 2011, the area around the West Side Market was beginning to show signs of revitalization. As the vacancy rate along West 25th Street dropped and new businesses moved in, the Market District was returning to a regional destination. Ohio City Incorporated began working with residential and commericial property owners along West 25th Street to continue to create a lively commerical district where residents and visitors felt safe and where businesses wanted to relocate. The Special Improvement District (SID) was formed in 2012, which then created the Market District Improvement Corproation, the nonprofit organization managing the operations of the SID. At itâ&#x20AC;&#x2122;s first passage, the SID covered the main commerical district surrounding the West Side Market along West 25th Street from Lorain to Bridge Avenues. After the success of itsâ&#x20AC;&#x2122; first five years and the continued growth of the neighborhood, the SID expanded South of Chatham Avenue and North to Detroit Avenue in 2016. With this expansion, the Market District Improvement Corporation became the Ohio City Improvement Corporation (OCIC). With a focus on safety, maintenance, and hospitality, OCIC works to improve the experience of individuals in the district. In 2019, OCI led the renewal of the SID for another five years to include a total of 400 properties including residential homes and extends the boundaries out to Urban Community School.

PLACE MAKING With our partnership, we have proved that a community coming together can make great things happen. This past year particularly, but with continued development plans like the Irishtown Bend project, we will only increase this common theme of CMHA being an integral part of this neighborhood and city overall.

PLACEMAKING Part of Ohio City Incorporated’s work is to improve the connections in and around the Ohio City neighborhood. There was no place where this work was needed more than the Cuyahoga Metropolitan Housing Association (CMHA) public housing property that looks and feels the least connected to Ohio City -- Lakeview Estates. Beginning in early 2017, a collaboration between OCI, Trust for Public Land, and the Lakeview Estates residents was formed to implement a greening and beautification initiative. What began as an opportunity to incorporate more green space into CMHA’s public housing property at Lakeview Estates quickly evolved. After extensive conversation with residents and administration, the team focused on improving the greenspace already there. Instead of adding more greenspace, the residents identified things like improving air quality as a greater priority. Placekeeping and community empowerment have been the main drivers behind this project, with the goal to provide resources to the residents that will empower them to continue to create the space that they deserve.

PROGRAM HIGHLIGHT: LAKEVIEW GREENING PROJECT TREE PLANTING – A major problem identified during planning with residents regarding greening Lakeview was the significant air quality issues residents face that cause health concerns and lower the quality of life. In May 2019, residents of Lakeview Estates, alongside volunteers, planted several trees around the property, which will make both short and long term impact on air quality and the public health in the area. HELPING HANDS – In October 2019, Cleveland artist Glen Infante took inspiration from the younger residents of the Estates and transformed the basketball court at the center of Lakeview into a colorful work of art. The mural has two court designs and features two clasped hands, signifying the strength of the relationships built within the CMHA community. BICYCLE RACKS – During the annual Spring Break Jam, youth participants took part in a design competition for new bicycle racks to be installed outside the community center. Two designs were chosen - a flower and a basketball hoop - and were forged and installed by Rust Belt Welding in December. These colorful works of art also help support alternative modes of transportation.

TELLING OUR STORY Closing West 25th Street off to cars and letting the community celebrate in the street is one of the highlights of the neighborhood. The Ohio City Street Festival is truly fun for all and brings friends and families together in Ohio City in a super positive way!

PROGRAM HIGHLIGHT: OHIO CITY STREET FESTIVAL THE BEGINNING – The West Side Market’s (WSM) Centennial Street Festival + Parade included 40 Ohio City restaurants and businesses, and over 50 WSM vendors. There was a parade put on in partnership with Parade the Circle that included over 500 performers marching behind the Grand Marshalls, West Side Market vendors and their families. THE GROWTH – Ohio City Incorporated, responding to resident and business requests, brought the festival back in 2015. Since then, the Ohio City Street Festival has grown tremendously. The Street Festival is still a fullday event with highlights from the West Side Market, neighborhood vendors and local music. In 2016, OCI began engaging with local artists and arts organizations to provide pop-up cultural experiences throughout the day. The greatest addition was the “Kids Zone”, an entire area dedicated to kids activities including kid-oriented performances, arts and crafts and bouncy houses. THE FUTURE – We look forward to what is in store for the Street Festival in coming years. We have begun looking to find ways to incorporate more people into the planning of the Festival to ensure we find more ways to make the event truly representative of the neighborhood.

LOOKING TO THE FUTURE Being a growing neighborhood isn’t about buildings. It is about connecting long term and new residents to amenities and opportunities. It’s about keeping and creating spaces that allow those people to come together, and ultimately about feeling you belong.

LOOKING TO THE FUTURE QUALITY OF LIFE: SAFETY Community Safety is, as always, a top priority for both Ohio City residents and Ohio City Incorporated. Looking forward, OCI will expand existing safety initiatives like the Home Safety Improvement Program, the Safety Camera Initiative, NearWestSafety.org, and the safety arm of the Special Improvement District; We will also introduce new safety initiatives such as community wide trainings on a variety of safety related topics, and a comprehensive plan for communicating about safety issues in a timely, effective manner to residents. PLACEMAKING: PLAY ON MARKET In 2019, OCI converted Market Avenue into a temporary pop-up park for the summer, creating a safer environment for people to walk and gather in a bustling area of Ohio City. The project, Play on Market, was designed to be an inclusive space that attracted families and kids to the area with kid-sized furniture and the removal of vehicles; encouraged people to linger and patronize adjacent businesses; and offered a comfortable space where people could spend time and socialize without having to spend money. OCI will continue working with stakeholders on a plan for the street that could include creating a permanent space for people. TELLING OUR STORY: TALK OF THE TOWN This series of community conversations aims to increase engagement while equitably providing access to information for residents. Looking ahead to 2020, OCI is committed to continuing to provide this platform for a diversity of voices in the neighborhood to bring awareness, concerns, successes and potential solutions to the issues of all community stakeholders. 2020â&#x20AC;&#x2122;s topics will include Affordable Housing, Community Safety Engagement, and Resident Interactions. This series is open to the public and are most impactful when resident-led.

The first recipient of the Near West Recreation Coach awardee, Cameron Helmick, is a model coach that displays sincere dedication to his players and the overall league. He has been a coach with Near West Recreation for over two years and has led over ten different teams in basketball, lacrosse, baseball, soccer and volleyball in that time. Cameron has a competitive spirit and likes to win, but his main priorities are that all his players are improving their skill set, having fun, and learning how to be a great teammate.

T H A N K YO U TO O U R OHIO CITY GUARDIANS The Ohio City Guardians program launched in 2016 to ensure the safety and security of the neighborhood. We recognize this group of neighborhood stakeholders who have supported the program and made a significant donation to Ohio City safety initiatives.

T H A N K YO U TO O U R 2 01 9 D O N O RS Thank you to the following individuals and organizations for making the work of Ohio City Incorporated possible through financial donations and ongoing support. This list represents gifts received between January 1 to December 31, 2019.

PA R T N E R S H I P S Thank you to the following community partners who help us to advance the mission of our organization and broaden the programs and resources that we are able to offer to our residents. APA Cleveland

The City of Cleveland

Cuyahoga County Board of

NEO Coalition for the Homeless 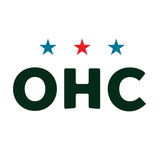