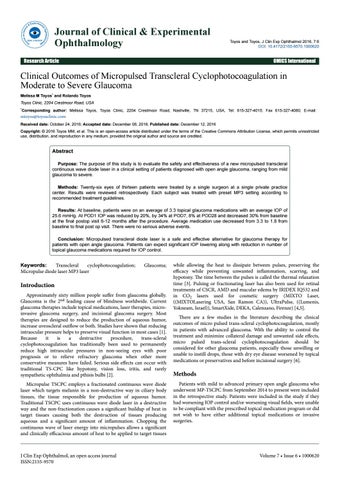 mtoyos@toyosclinic.com Received date: October 24, 2016; Accepted date: December 06, 2016; Published date: December 12, 2016 Copyright: © 2016 Toyos MM, et al. This is an open-access article distributed under the terms of the Creative Commons Attribution License, which permits unrestricted use, distribution, and reproduction in any medium, provided the original author and source are credited.

Abstract Purpose: The purpose of this study is to evaluate the safety and effectiveness of a new micropulsed transcleral continuous wave diode laser in a clinical setting of patients diagnosed with open angle glaucoma, ranging from mild glaucoma to severe. Methods: Twenty-six eyes of thirteen patients were treated by a single surgeon at a single private practice center. Results were reviewed retrospectively. Each subject was treated with preset MP3 setting according to recommended treatment guidelines. Results: At baseline, patients were on an average of 3.3 topical glaucoma medications with an average IOP of 25.6 mmHg. At POD1 IOP was reduced by 20%, by 34% at POD7, 8% at POD28 and decreased 30% from baseline at the final postop visit 6-12 months after the procedure. Average medication use decreased from 3.3 to 1.8 from baseline to final post op visit. There were no serious adverse events. Conclusion: Micropulsed transcleral diode laser is a safe and effective alternative for glaucoma therapy for patients with open angle glaucoma. Patients can expect significant IOP lowering along with reduction in number of topical glaucoma medications required for IOP control.

Introduction Approximately sixty million people suffer from glaucoma globally. Glaucoma is the 2nd leading cause of blindness worldwide. Current glaucoma therapies include topical medications, laser therapies, microinvasive glaucoma surgery, and incisional glaucoma surgery. Most therapies are designed to reduce the production of aqueous humor, increase uveoscleral outflow or both. Studies have shown that reducing intraocular pressure helps to preserve visual function in most cases [1]. Because it is a destructive procedure, trans-scleral cyclophotocoagulation has traditionally been used to permanently reduce high intraocular pressures in non-seeing eyes with poor prognosis or to relieve refractory glaucoma when other more conservative measures have failed. Serious side effects can occur with traditional TS-CPC like hypotony, vision loss, iritis, and rarely sympathetic ophthalmia and pthisis bulbi [2]. Micropulse TSCPC employs a fractionated continuous wave diode laser which targets melanin in a non-destructive way in ciliary body tissues, the tissue responsible for production of aqueous humor. Traditional TSCPC uses continuous wave diode laser in a destructive way and the non-fractionation causes a significant buildup of heat in target tissues causing both the destruction of tissues producing aqueous and a significant amount of inflammation. Chopping the continuous wave of laser energy into micropulses allows a significant and clinically efficacious amount of heat to be applied to target tissues

while allowing the heat to dissipate between pulses, preserving the efficacy while preventing unwanted inflammation, scarring, and hypotony. The time between the pulses is called the thermal relaxation time [3]. Pulsing or fractionating laser has also been used for retinal treatments of CSCR, AMD and macular edema by IRIDEX IQ532 and in CO2 lasers used for cosmetic surgery (MIXTO Laser, ((MIXTOLasering USA, San Ramon CA)), UltraPulse, ((Lumenis, Yokneam, Israel)), SmartXide, DEKA, Calenzano, Firenze) [4,5]. There are a few studies in the literature describing the clinical outcomes of micro pulsed trans-scleral cyclophotocoagulation, mostly in patients with advanced glaucoma. With the ability to control the treatment and minimize collateral damage and unwanted side effects, micro pulsed trans-scleral cyclophotocoagulation should be considered for other glaucoma patients, especially those unwilling or unable to instill drops, those with dry eye disease worsened by topical medications or preservatives and before incisional surgery [6].

Methods Patients with mild to advanced primary open angle glaucoma who underwent MP-TSCPC from September 2014 to present were included in the retrospective study. Patients were included in the study if they had worsening IOP control and/or worsening visual fields, were unable to be compliant with the prescribed topical medication program or did not wish to have either additional topical medications or invasive surgeries.

Page 2 of 3 Intra-operatively, the patients received a modified retrobulbar block of 10 cc 1:1 bupivacaine and 2% lidocaine with epinephrine prior to beginning the procedure. Oral anxiolytics were available if requested and 5-10 mg of oral diazepam was given in those cases (1 patient out of 13 requested diazepam). The MP3 handpiece was used with the Iridex IQ810 laser (Mountain View, CA) with the MP3 preset power: 2000 mW/cm2, micropulse “ON” 0.5 ms, micropulse “OFF” 1.1 ms and duty cycle (proportion of each cycle during which the laser is on) 31.33%. The Iridex MP3 uses a laser diode of 810 nm infrared wavelength and SmartProbe RFID with Laser Parameter Memory to trigger the MP3 preset power which can also be adjustable. Power output ranges from 50-3000 mW, depending on delivery device. Only one treatment was given to each patient in this study. Lieberman specula and globe manipulation by cotton swabs were used to ensure adequate exposure to the targeted area. The laser probe was then applied in a “painting” motion along the upper hemisphere including the 3 and 9 o’clock positions. In traditional TSCPC, the areas of 3 and 9 o’clock must be avoided to do risk of damage to the neurovascular bundles. The laser was delivered for 80 seconds/ hemisphere for a total of 160 seconds of treatment. Patients received a post-operative dose of neomycin polymyxin dexamethasone ointment and were patched for 4 hours. All patients were started on topical

difluprednate hourly until the first postoperative visit then difluprednate was tapered starting at qid. All patients were tapered off steroids within the first 14 days postoperatively. The following baseline parameters were collected for each patient at each visit: age, gender, race/ethnicity, preoperative IOP, glaucoma diagnosis, intraocular pressure, level of inflammation and number of medications used. Surgical success was defined as IOP 6-21 mm Hg or reduction of IOP by 20%. Topical glaucoma medications were tapered and/or re-added at the doctor’s discretion.

Results Twenty-six eyes of thirteen patients were included in the study. Average age of patients was 62 years. Baseline intraocular pressure was 25.6 mmHg and patients were on 3.3 pressure lowering medications. All patients had previously undergone uncomplicated phacoemulsification and SLT or MLT. Most (18/26) of the eyes were severe or end-stage glaucoma. Average best corrected visual acuity was 20/60. Twelve percent of eyes worsened in BCVA by 2 or more lines ETDRS, 77% remained stable and 11% improved their best corrected visual acuity (attributed to cataract surgery during the postoperative period) (Table 1).

Table 1: Intraocular Pressures at Baseline and at Postoperatively After MP3. After the procedure, patients were immediately started on hourly difluprednate while awake until the first post-operative visit in which the difluprednate was used bid or qid as needed and tapered over 2 weeks’ time. Average IOP drop at POD 1 was 20% and 34% at POD7 (using an average of 1.3 IOP lowering medications.) At POD14, average IOP was decreased by 8% using one IOP lowering medication. Timeline Number of glaucoma meds

At one month, IOP was down by an average of 20% and average number of iop reducing medications was 1.2. At 6-12 months, the average IOP was 30% lower than baseline (18 mmHg) and patients required an average of 1.8 medications. There were no serious adverse events (Table 2).

reports of pain were resolved by postoperative Day 7. Two eyes of two patients experienced a worsening of vision of 2 lines during the study period. Visual acuity of the other patients remained stable (Table 3).

Discussion Trabeculectomy has long been the definitive treatment for advancing or uncontrolled glaucoma in sighted patients but there are many drawbacks to the procedure [7]. It is an invasive surgery with healing times up to 3 months or longer. There are many ways for patient to experience complications from trabeculectomy. In the short

term, patients face acute complications like hypotony, infection, choroidals, leaking bleb and need for additional surgery. Over their lifetimes, they may experience a perpetual increase in risk of infection and a need for needling or other surgical procedure with the loss of bleb [8].

Page 3 of 3 TS-CPC continuous wave diode laser has historically been an effective method of reducing intraocular pressure but its use was confined to eyes with poor prognosis and non-seeing eyes because of the extreme nature of the treatment. Hypotony was not uncommon when the ciliary body was targeted with energies strong enough to hear it “pop.” The risk of hypotony, scarring and severe inflammation made its use for sighted eyes too risky [9]. The advent of micro-pulsed transcleral diode laser has revolutionized both the diode laser and also other types of lasers including the CO2 laser. The micro-pulsing concept allows for significant amounts of energies to reach target tissues for maximal effectiveness but allowing time for the heat to diffuse instead of building reduces the risk of unwanted side effects and make the laser safe enough and predictable enough to use in sighted eyes. Micropulsed TS-CPC has been shown to be safe and effective for eyes affected on every level of the glaucoma spectrum [10]. In our practice, MP-TSCPC is used for patients who have elevated IOP and/or advancing glaucoma even after SLT/MLT and are unwilling or unable to instill drops. It is also recommended for patients whose dry eye disease is worsened by their glaucoma medications and before incisional surgery. It is an important adjunctive therapy for patients to help them control their pressures, reduce their medication load and avoid invasive surgery. MP-TSCPC has been shown to be a safe and effective solution to help lower intraocular pressure noninvasively for patients with open angle glaucoma.

Ethical Approval All procedures performed in studies involving human participants were conducted in accordance with the ethical standards of the institutional and/or national research committee and with the 1964 Helsinki Declaration and its later amendments or comparable ethical standards. For a retrospective study with an approved device, formal consent is not required. 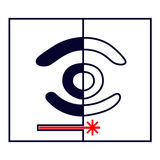