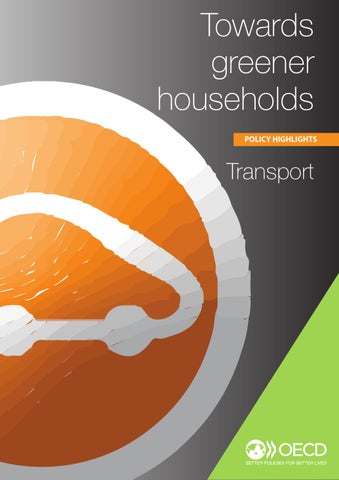 Analysing attitudes to transport Personal behaviour and choices in daily life, from what we eat to how we get to work or heat our homes, have a significant – and growing – effect on the environment. But why are some households greener than others? And what factors motivate green household choices? Answering these questions is vital for helping governments design and target policies that promote “greener” behaviour. The OECD’s Environmental Policy and Individual Behaviour Change (EPIC) survey is designed to do just that. Drawing on observations from over 12 000 respondents in 11 OECD countries (Australia, Canada, Chile, France, Israel, Japan, Korea, the Netherlands, Spain, Sweden and Switzerland), this large-scale household survey conducted in 2011 explores what drives household environmental behaviour and how policies may affect household decisions. It focuses on five areas in which households have significant environmental impact: energy, food, transport, waste and water.

Transport and the environment Society bears substantial environmental costs from individuals’ transport choices. Traffic congestion in urban areas decreases air quality and hinders economic productivity and well-being. Within Europe, traffic-related air pollution has been estimated to be responsible for approximately 3% of all deaths every year. Across OECD countries, road travel by car or bus has consistently been both the dominant transportation mode and the largest transport-related contributor to CO2 emissions.

This policy highlights points decision makers towards ways to design well-targeted and effective policies to green household transport use.

Results show that car ownership is not strongly associated with environmental awareness or concern, although these do have a bearing on car use – measured as distances driven weekly – which has a much greater impact on the environment. The decision to use a car also depends heavily on the proximity of the destination and the convenience of public transport.

Survey questions included the number and type of cars owned, willingness to pay for an electric car, and use of and views on alternative forms of transport. Responses were cross-analysed with a wide range of attitudinal and socio-economic data for the respondent households.

is the share of alternative fuel vehicles (LPG, natural gas, electric, hybrid and biofuels) owned by surveyed households, while the share of petrol vehicles is 74%.

is the additional price, on average, that respondents are willing to pay for an electric vehicle compared to its conventional counterpart (see figure above). There is a clear link between willingness to pay (WTP) and environmental concerns: those who find it acceptable to bear some of the cost of environmental policies are willing to pay more for an electric car. © OECD TOWARDS GREENER HOUSEHOLDS: TRANSPORT

is the average weekly distance driven by male respondents; 80km more than the weekly average reportedly driven by women.

is the longest time people will tolerate walking to their nearest public transport stop before choosing to use their cars instead.

What determines green behaviour? Convenience and time saving. The travel time advantage of the car is by far the most influential factor in households’ decision to drive rather than use other travel methods. The convenience of the car can be attributed to the fact that much infrastructure is built for car use – not only the density of streets and highways, but also the spatial pattern of shopping facilities, leisure facilities, residential areas and workplaces. Making public transport more accessible and convenient will therefore reduce reliance on cars.

What incentives would help households reduce car use?

Environmental attitudes play an important but subtle role in households’ transport choices. Households with a greater concern for environmental issues are more likely to use public transport and have a higher willingness to pay for electric cars.

Price is the most important factor for respondents when buying a car and largely outweighs environmental attributes. Higher income households tend to buy less environmentallyfriendly cars, as other factors (safety, reliability) are more relevant to them. Furthermore, fuel efficiency increases the end price of cars.

Infrastructure. The lack of infrastructure - for charging electric cars, for cycling and walking safely, for efficient public transport systems – are all major barriers to greener transport choices.

Increased cost of car use

Ensure intelligent urban planning that brings home, shops and workplaces closer together and reduces the need for cars. Use zoning and incentives to promote local shops and businesses instead of large, out-of-town shopping malls.

Consider the use of subsidies for environmentally friendly cars while bearing in mind that this might ultimately increase car use and fuel consumption. It is also important to assess the efficiency and equity implications of subsidising wealthy households at the same rate as poorer households.

Provide communication and public education on the environmental impact of fossil fuel-based cars to encourage greener purchases and reduce car use, especially among the younger age groups.

This work is published on the responsibility of the Secretary-General of the OECD. The opinions expressed and arguments employed herein do not necessarily reflect the official views of the Organisation or of the governments of its member countries. This document and any map included herein are without prejudice to the status of or sovereignty over any territory, to the delimitation of international frontiers and boundaries and to the name of any territory, city or area.