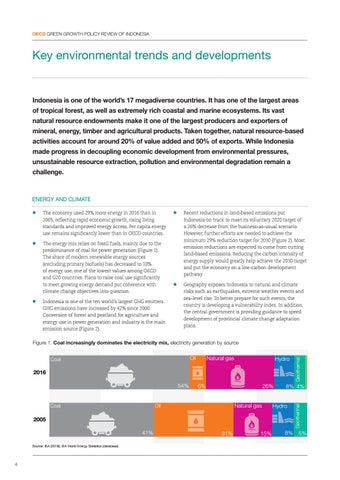 Indonesia is one of the world’s 17 megadiverse countries. It has one of the largest areas of tropical forest, as well as extremely rich coastal and marine ecosystems. Its vast natural resource endowments make it one of the largest producers and exporters of mineral, energy, timber and agricultural products. Taken together, natural resource-based activities account for around 20% of value added and 50% of exports. While Indonesia made progress in decoupling economic development from environmental pressures, unsustainable resource extraction, pollution and environmental degradation remain a challenge.

The economy used 29% more energy in 2016 than in 2005, reﬂecting rapid economic growth, rising living standards and improved energy access. Per capita energy use remains significantly lower than in OECD countries.

The energy mix relies on fossil fuels, mainly due to the predominance of coal for power generation (Figure 1). The share of modern renewable energy sources (excluding primary biofuels) has decreased to 10% of energy use, one of the lowest values among OECD and G20 countries. Plans to raise coal use significantly to meet growing energy demand put coherence with climate change objectives into question.

Indonesia is one of the ten world’s largest GHG emitters. GHG emissions have increased by 42% since 2000. Conversion of forest and peatland for agriculture and energy use in power generation and industry is the main emission source (Figure 2).

Recent reductions in land-based emissions put Indonesia on track to meet its voluntary 2020 target of a 26% decrease from the business-as-usual scenario. However, further efforts are needed to achieve the minimum 29% reduction target for 2030 (Figure 2). Most emission reductions are expected to come from cutting land-based emissions. Reducing the carbon intensity of energy supply would greatly help achieve the 2030 target and put the economy on a low-carbon development pathway.

Geography exposes Indonesia to natural and climate risks such as earthquakes, extreme weather events and sea-level rise. To better prepare for such events, the country is developing a vulnerability index. In addition, the central government is providing guidance to speed development of provincial climate change adaptation plans.

Indonesia is the world’s fourth most populated country, and the largest archipelagic one. Vibrant economic growth has lifted millions of peo...

Indonesia is the world’s fourth most populated country, and the largest archipelagic one. Vibrant economic growth has lifted millions of peo...