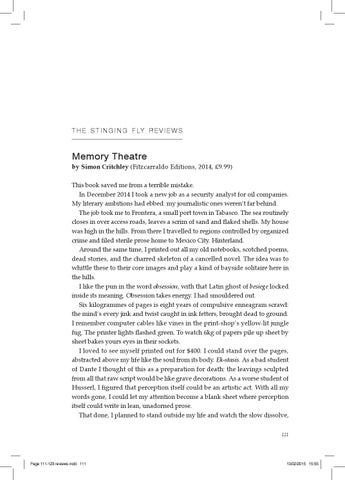 by Simon Critchley (Fitzcarraldo Editions, 2014, £9.99) This book saved me from a terrible mistake. In December 2014 I took a new job as a security analyst for oil companies. My literary ambitions had ebbed: my journalistic ones weren’t far behind. The job took me to Frontera, a small port town in Tabasco. The sea routinely closes in over access roads, leaves a scrim of sand and flaked shells. My house was high in the hills. From there I travelled to regions controlled by organized crime and filed sterile prose home to Mexico City. Hinterland. Around the same time, I printed out all my old notebooks, scotched poems, dead stories, and the charred skeleton of a cancelled novel. The idea was to whittle these to their core images and play a kind of bayside solitaire here in the hills. I like the pun in the word obsession, with that Latin ghost of besiege locked inside its meaning. Obsession takes energy. I had smouldered out. Six kilogrammes of pages is eight years of compulsive enneagram scrawl: the mind’s every jink and twist caught in ink fetters, brought dead to ground. I remember computer cables like vines in the print-shop’s yellow-lit jungle fug. The printer lights flashed green. To watch 6kg of papers pile up sheet by sheet bakes yours eyes in their sockets. I loved to see myself printed out for $400. I could stand over the pages, abstracted above my life like the soul from its body. Ek-stasis. As a bad student of Dante I thought of this as a preparation for death: the leavings sculpted from all that raw script would be like grave decorations. As a worse student of Husserl, I figured that perception itself could be an artistic act. With all my words gone, I could let my attention become a blank sheet where perception itself could write in lean, unadorned prose. That done, I planned to stand outside my life and watch the slow dissolve, 111

find in this a tiny rhyme for my own dissolution into ion hail, salt air, and nothing else. But first the book: then the mistake. * Memory Theatre is the philosopher Simon Critchley’s first work of fiction, the latest in the series of abrupt ‘right turns‘ that he says have characterized his career. His is a strange map: Emmanuel Lévinas and Jacques Derrida veer on to David Bowie and Wallace Stevens. But his motor is a readerly acuity that exposes his subjects’ work as fragments shored against their own, inevitable ruin. Critchley tends to borrow Sartre’s idea of the projet, in which the subject throws him or herself against the fact of death in a kind of ‘controlled leap into oblivion‘ that tries to cross the void while knowing this is impossible: doomed, daring, and a bit dumb to look at from afar. To Critchley, this wish to be immortal while knowing we can’t be is either hilarious or tragic or both: hence the fleet, joke-studded darkness of his style. Critchley is what would happen if Heidegger rather than Homer Simpson tried to jump Springfield Canyon. Sometimes he finds this panic-imperative romantic, as when documenting the Zen calm of Terrence Malick’s heroes in Things Merely Are (2005). Other times he finds in the projet a glimmer of utopia, as in his (rather simplistic) take on anarchist politics, Infinitely Demanding (2007). Or else, as here, in Memory Theatre, his subject cracks in fear and goes very strange indeed. The book’s narrator is a lecturer whose biographical facts tally startlingly with those of Critchley ‘in real life‘. Both turned to philosophy after an industrial accident ended their musical ambitions. Both suffer from insomnia and the living claustrophobia of tinnitus, where everything is ‘packed and swarming‘. One day, a box arrives at the narrator’s door from his ex-colleague, Michael Haar, who died during the 2003 heatwave after a series of ‘hypochondriacal illnesses‘. Buried amid his papers are horoscopes predicting the moment and cause of deaths for a number of phlosophers. The names include Jacques Derrida and Richard Rorty—who died after Haar—and also Critchley himself. This is prophecy enough for the narrator, and his reaction is as calm and sanguine as some of the exemplars from his own Book of Dead Philosophers (‘Cerebral haemorrhage. OK. I was expecting lung cancer‘). The prediction powers his career and personal life to new, tranquil heights, arriving at a point where he is ‘thoughts without a thinker‘. 112 Reviews

His waking dream is broken by the arrival of another box from the Haar estate, this time containing a Renaissance-style ‘memory theatre‘. The receptacle compresses memory-content into images arranged row by row. Beset by what he sees as prophetic body pains ‘from the west‘ Critchley travels to the place of his death and resolves to build a theatre in which to sit and await the end. The most impressive aspect of this novel is Critchley’s play with voices. There’s his characteristically light-footed didacticism during his brief tour through the work of Frances Yates. But he’s got other tricks. The use of a smooth, gerund-motored style to float through a dream-sequence in a cathedral is perfectly deployed. Best of all is when he tunes his ear to the ‘surrealist loop-poem‘ of the shipping forecast, finding a kind of Paul Farley found-poem in the list of names and weather-conditions. All the same, at times the bland diction he uses to echo his career’s sterile calm becomes a little overdone. ‘I couldn’t think of anything apart from death and the vague prospect of breakfast cereal‘ is the kind of thing Thom Yorke did better on the Radiohead website in 2007. He’s also a touch too glib. Because his Beckett note is played for laughs, the shattered telegraphese of the book’s last section doesn’t feel earned enough (‘Paradise. But in reverse. An Eden containing all that falls‘). More intresting are his cover versions of concerns lifted from Francis Ponge and Wallace Stevens (clearly on his mind in this text, given that the phrase ‘flat-footed philosophy‘ occurs in Michael Haar ’s unpublished book on Stevens and in Critchley’s published one). These come at the end of the book, with the paper memory theatre dissolved in the rain, and a new, more grandiose project underway. Critchley decamps to the coast to build an island of memories. The black grass and fake, weak, sun recall the landscape of late Stevens and the uninhabitable zones of Ponge. The text’s voice modulates into the shipping forecast’s bland, ‘things-as-they-are‘ tone, all sibilance and smooth -ing sounds: a voice that eels around its objects without grasping them: There is a persistent rain over the Brabant heath.

I see the dunes in the distance and think of rivers

swelling and debouching into the vast grey North Sea.

In real life, Critchley has commented to Andrew Gallix that Memory Theatre is him ‘looking back in the rearview mirror as [he pushes] harder on the gas‘. Though not all equally successful, these multiple experiments in style hint at Reviews 113

the value of this book: a compressed, contained name-check of all that Critchley will try to save as he speeds off on his next ‘right turn‘. * Now the mistake. Critchley’s text is structured around photographs by Liam Gillick which document the costruction of a skyscraper in reverse, a slo-mo progress-missile fired into the ground. I was reminded of my work at a crack addicts’ shelter in Brasília. The human analogue to builders’ rubble. Mostly I just listened, but I remember one morning a colleague told me that a patient, Sandro, had been caught in his room with the tan horn of his own shit held bagged in his underwear. His chewmarks glistened on one end of the turd. At our next session, I asked Sandro why. He told me he couldn’t bear to fall apart any more than I have. I thought of Sandro while reading Memory Theatre, especially at the moment when the narrator is lost in his compulsive skite back through the trivial details of who he is: from the picture of a head that reminds him of Althusser to ‘the playing and coaching staff of the great Liverpool Football Club teams of the 1960s, 70s and 80s‘. The narrator cycles faster and faster back through his entire self, compressing the memory tour down to two hours as if to make sure he is still ‘all there‘. The same compulsive recollection drives Sandro to eat his own shit. Memory becomes re-membering, even as time pulls Critchley and Sandro apart: a systems-check which can’t support a single lost detail, however trivial, because every lost particle is a tiny death. The failure of Critchley’s project forms the book’s anti-climax, converting the text from the sealed form of novel to the more soluble form of the fable. The formal shift is apt. Critchley’s memory-images are either still images (such as the ‘Pound-influenced pictograms‘ he uses to recall concepts) or short sequences of frames (like his hillside walks outside Cardiff with Michael Haar’s wife Ann). The linearity and closed shape of a novel gathers these frames together, as in a memory theatre, but holds them static. A fable’s open form, however, allows the text to diffuse into the reader rather than merely end. If the novel is a machine for remembering itself, then the fable is a machine for forgetting. The text’s slow drift towards nothingness is imaged by the narrator’s decision to let his memory theatre dissolve in the rain and decamp to the coast: space at its most open and soluble. The true rehearsal for death, runs the fable’s argument, comes not by compulsively embalming ourselves in memory, but in learning to forget. 114 Reviews

* Frontera means border. From my outcrop I watch mist break up out of the dark like a slowed ocean: a nowhere frontier. I lose things: my note-scrawled copy of Dante’s Purgatorio; a wadded-up spiral notebook. I’d once itch and fume and panic over this. But since finishing Memory Theatre I have realised that loss is a gift. Perficio means to perfect and also means to be through with. I will let the air rinse my 6kg of pages. If I pitch anything more, it will be notebooks into fog. From my window I watch the building site for the new petroleum plant clank and bang way off in the murk. The site’s an anticipatory ruin. The wet air smells like ruin, or progress, or both. Wadded down under fir trees, the edges of my old pages soften and bleed their letters. Planned accidents. The tight black cursive is like the trod-on hulls of sycamore seeds: small, smashed lines. Every day I check their fade. This book saved me from a terrible mistake. —tim

by Eliza Robertson (Bloomsbury, 2015, £14.99) There is a great quote on the Thresholds story site from the writer and critic Bidisha about the short story, in which she says ‘a short story need not be short or tell a story’. She goes on to say: ‘It can take any shape, be in any voice, lend itself to any genre or setting… It can be driven by energy, by personality, by atmosphere, by polished prose, by structure, by sinister concision or expansive comedy. It can be like a compressed Greek tragedy, a passing bubble of Noel Cowardly banter, a family saga or house-history.’ In other words, the short story can be anything at all and this is clearly a maxim Eliza Robertson lives by in her work. Her début collection Wallflowers contains a cornucopia of original, lyrical stories, obsessed as much with form-bending as with her themes of grief, the importance and beauty of the natural world, and frail, fading relationships. Robertson likes to experiment: one story in the collection has a reverse timeline, another consists of a one-sided correspondence from sister to brother. There are straight narratives, too, but even these have the skew-eyed, individualistic vision this writer excels at—stories are told at a distance and with a trademark aloofness and a pseudo-naivety to the characters that Reviews 115