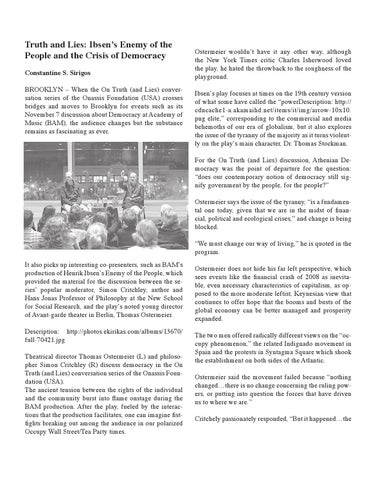 Truth and Lies: Ibsen’s Enemy of the People and the Crisis of Democracy Constantine S. Sirigos BROOKLYN – When the On Truth (and Lies) conversation series of the Onassis Foundation (USA) crosses bridges and moves to Brooklyn for events such as its November 7 discussion about Democracy at Academy of Music (BAM), the audience changes but the substance remains as fascinating as ever.

Ostermeier wouldn’t have it any other way, although the New York Times critic Charles Isherwood loved the play, he hated the throwback to the roughness of the playground. Ibsen’s play focuses at times on the 19th century version of what some have called the “powerDescription: http:// cdncache1-a.akamaihd.net/items/it/img/arrow-10x10. png elite,” corresponding to the commercial and media behemoths of our era of globalism, but it also explores the issue of the tyranny of the majority as it turns violently on the play’s main character, Dr. Thomas Stockman. For the On Truth (and Lies) discussion, Athenian Democracy was the point of departure for the question: “does our contemporary notion of democracy still signify government by the people, for the people?” Ostermeier says the issue of the tyranny, “is a fundamental one today, given that we are in the midst of financial, political and ecological crises,” and change is being blocked. “We must change our way of living,” he is quoted in the program.

It also picks up interesting co-presenters, such as BAM’s production of Henrik Ibsen’s Enemy of the People, which provided the material for the discussion between the series’ popular moderator, Simon Critchley, author and Hans Jonas Professor of Philosophy at the New School for Social Research, and the play’s noted young director of Avant-garde theater in Berlin, Thomas Ostermeier. Description: http://photos.ekirikas.com/albums/13670/ full-70421.jpg Theatrical director Thomas Ostermeier (L) and philosopher Simon Critchley (R) discuss democracy in the On Truth (and Lies) conversation series of the Onassis Foundation (USA). The ancient tension between the rights of the individual and the community burst into flame onstage during the BAM production. After the play, fueled by the interactions that the production facilitates, one can imagine fistfights breaking out among the audience in our polarized Occupy Wall Street/Tea Party times.

Ostermeier does not hide his far left perspective, which sees events like the financial crash of 2008 as inevitable, even necessary characteristics of capitalism, as opposed to the more moderate leftist, Keynesian view that continues to offer hope that the booms and busts of the global economy can be better managed and prosperity expanded. The two men offered radically different views on the “occupy phenomenon,” the related Indignado movement in Spain and the protests in Syntagma Square which shook the establishment on both sides of the Atlantic. Ostermeier said the movement failed because “nothing changed…there is no change concerning the ruling powers, or putting into question the forces that have driven us to where we are.” Critchely passionately responded, “But it happened…the

protesters succeeded in raising questions…It did much to change how people think about what is happening – it was the first leftist response to the Tea Party.” Critchley heroically fought Ostermeier’s “black or white” perspective, to which the latter might respond that heroism for him is manifested when individualism is transcended and “for a time we are part of a movement,” as he said at BAM. Presumably that is when a critical mass of individuals and ideas can make a revolution that changes the rules of the game in the playground. Ostermeier returned to the evening’s topic by declaring the world is in a “a political crisis, a deep crisis of democracy.” He believes the phrase “financial crisis is a misnomer,” explaining that America made a political decision during the Reagan administration to deregulate the financial sector, which enabled them “to do whatever they wanted.” Now there is government not of the people, or even their representatives, who are overwhelmed, but by a technocratic elite. “We prefer to not get involved and to let the technocrats handle the problems,” said Ostermeier, to which Critchley, in a rueful moment said “when you reach a certain point, the truth, the political possibilities you see are not fun, so people say, ‘let’s go back to the lies.’” Hence the perennial pull of lies, noble or otherwise. Perhaps that is what is happening in Greece, where two years ago Ostermeier was thrilled by the protests against the system. Today, he might say, we see not stability but just “deadness.” The life and writing of Ibsen were also discussed. He began by attempting to put the great ideas of his time onstage, but failure forced him to realize to come alive, concepts need the flesh and blood of characters and their stories, especially family conflicts. Regarding the “eternal questions’ that fascinate humanity, Ostermeier does not like it when the “same questions are asked over and over.” He said, “Yes there are eternal questions like ‘why are we here’ and there will be an an-

swer, but by then it will be too late. It is more important to look at what is happening around you.”